The material facts of the case:

The underwear, consisting of two pairs of underpants and two siglets was bought by appellant at the shop of the respondents. The retailer had purchased them with other stock from the manufacturer. The appellant put on one suit and by the evening he felt itching on the ankles. Next day a redness appeared on each ankle. The appellant treated himself with calomine lotion but the irritation was such that he scratched the places till be bled.

Turn in your highest-quality paper
Get a qualified writer to help you with
“ Grant v Australian Knitting Mills ”
Get high-quality paper
NEW! AI matching with writer

He carried on with the underwear (washed). His skin was getting worse, so he consulted a dermatologist, Dr. Upton, who advised him to discard the underwear which he did. He was confined to bed for a long time. The rash became generalized and very acute. When he felt sufficiently recovered he resumed his medical practice, but soon had a relapse. His condition was so serious that he went into hospital. The illness was most severe, involving acute suffering, and at times Dr.

Upton feared that his patient might die. The appellant bought action against the respondents, claiming damages on the ground that he had contracted dermatitis by reason of the improper condition of underwear (presence of an irritating chemical – free sulphite, in the cuffs or ankle ends) purchased by him from the respondents, John Martin & Co., Ld., and manufactured by the respondents, the Australian Knitting Mills, Ld.

1) In their Lordships’ judgement the retailers are liable in contract of sale. The facts set out show negligence in manufacture.

If excess sulphites were left in garment, that could only be because someone was at fault and the appellant is not required to lay his finger on the exact person who was responsible, or to specify what he did wrong.

2) The decision treats negligence, where there is a duty to take care. In Donoghue’s case the duty was deduced simply from the facts relied upon: article issued to the world, used by the party in the state in which it was prepared and issued without it being changed in any way and without there being any warning of, or means of, detecting, the hidden danger. There was no personal intercourse between the maker and the user; but the duty is personal, because it is inter partes (between parties), it needs no interchange of words, spoken or written, or signs of offer or assent. The want of care and the injury are in essence directly and intimately connected. The word ‘control’ in D. case is used to emphasise the essential factor that the consumer must use the article exactly as it left the maker, and used it as it was intended to be used (control, of the maker, until it is used – artificial, because they parted with all the control when they sold the article).

3) In D. case can only be applied when the defect is hidden and unknown to the consumer. The presence of the deleterious chemicals in the pants, due to negligence in manufacture, was a hidden and latent defect, just as much as the remains of the snail in the opaque bottle: it could not be detected by any examination that could reasonably be made. Nothing happened between the making of the garments and their being worn to change their condition. The garments were made by the manufacturers for the purpose of being worn exactly as they were worn in fact by the appellant: it was not contemplated that they should be first washed.

4) D. was a case of food/drink to be consumed internally, but there is no distinction. The garments were made to be worn next to skin. Lord Atkin specifically puts as examples of what is covered by the principle he is enunciating things operating externally, such as ‘an ointment, a soap, a cleaning fluid or cleaning powder.’

5) The decision in D. essentially depended on the point that the article should reach the consumer or user subject to the same defect as it had when it left the manufacturer, and this was true for garment. 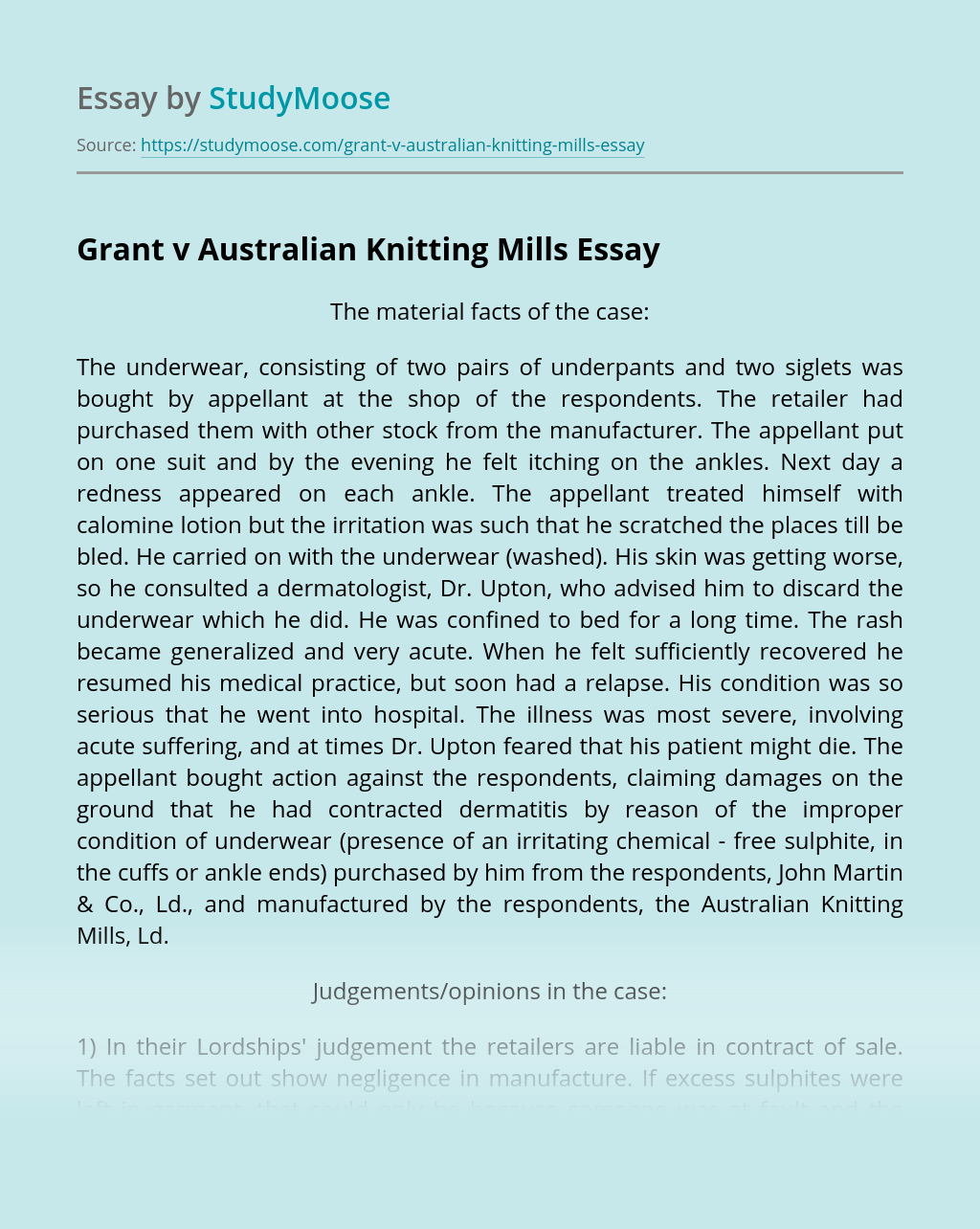 Turn in your highest-quality paper
Get a qualified writer to help you with
“ Grant v Australian Knitting Mills ”
Get high-quality paper
Helping students since 2015
Stay Safe, Stay Original