The movie Gran Torino, is a movie that is based on an old neighborhood which was mostly American nationalities living there. Through the years this changed and it became an Asian society to live in.

This movie was directed and produced by Clint Eastwood, which we has also one of the main characters in the movie. The story of the movie was written by Dave Johansson and the screen play was done by Nick Schenk.

Walt Kowalski is a widower who holds onto his prejudices despite the changes in his Michigan neighbourhood and the world around him.

Don't use plagiarized sources.
Get Your Custom Essay on Gran torino movie analysys Just from $13,9/Page

Kowalski is a grumpy, tough-minded, unhappy an old man, who can’t get along with either his kids or his neighbours, a Korean War veteran whose prize possession is a 1972 Gran Torino he keeps in mint condition. When his neighbour Thao, a young Hmong teenager under pressure from his gang member cousin, tries to steal his Gran Torino, Kowalski sets out to reform the youth.

Drawn against his will into the life of Thao’s family, Kowalski is soon taking steps to protect them from the gangs that infest their neighbourhood. “I have more in common with these gooks than my own spoiled, rotten family,” he tells himself.

The three main actors that have the biggest emphasis towards the movie is Clint Eastwood. He is the one who plays Walt Kowalski in the movie. Then we have the two kids from his neighbours. Thao which is been portrayed by Bee Vang, and Thao’s sister Sue, which has been played by Ahney Her.

There is a lot of intercultural aspects in the movie that we see but there is also a strong sense of how through the years, the differences from one generation to another and how alike they are in the different societies.

Before Walt Kowalski in the movie start to care about Thao and Sue, and before he gets to know them, he is depicted as a mad old man, which he is also very racist towards and outsiders, but especially the people from the Asian lands. The argue that can be made for this reason is that Walt before settling down in the neighbourhood that he lived with his deceased wife, we was in the Korean war. It wouldn’t be easy for any man to live in a neighbourhood, in which the ethnicity of the people living there is of the same ethnicity in which we fought against in the Korean War.

Through out the movie and especially when Walt starts to take Sue and Thao under his wings as a family one can say, and through out the stories that he tells and the harm’s he has done, in the end we can say that the way he dies to save Thao and Sue, it’s a way for Walt to get a type of redemption. He takes Sue and Thao as his children, to make right for him having two sons which he wasn’t ever there for them and vice versa. His relationship with those sons and their families is brusque because Walt is an emotionally closed-off guy. No one and nothing lives up to his standards, particularly the growing population of Hmong immigrants who now dominate his neighbourhood.

Thao’s cousin is in a gang in the area, and when they try to force Thao to join the gang and they make a ruckus during the night, Walt just wanted his piece but by getting involved in the situation, he saves Thao and then Thao in order to repay him, he does various different chores for Walt and he gets to see that Thao and Sue aren’t as bad kids as he thought, he was just prejudice towards the people that he just didn’t know. And slowly by time he becomes fond of the family and starts acting in a way as he is their protector. The film illustrates town members forcing to make a choice as to which popular culture they will follow. They can follow a path of religion and live peacefully or they can choose a path of constant feuding by joining a gang. Either way, the town has become divided and both opposing cultures seem to be constituted as a popular lifestyle.

The first major inter cultural communication is more of a tradition for the Hmong. When he unwillingly saves Thao, then the rest of the community, look to him in what they think that they have found a hero. They start bringing him different gifts and different plates of food as a way of them saying thank you for his actions. He still doesn’t want anything to do with them and tries to not accept them but there’s nothing else that he can do.

Walt’s wife, according to the movie was a person of the church. And now that she has passed away, the father of the church, father Janovich tries to be there with Walt and tries to make sure that he will be fine. Walt is a man who is haunted by what he did in the Korean War. In the film, Walter speaks to Father Janovich and says, “The thing that haunts a guy is the stuff he wasn’t ordered to do.” Within these few small words, Walt describes to Father Janovich the chaotic mindset that keeps his life forever haunted. This gives us the notion that Walt is haunted by his actions in the past and that’s why now he is such a grumpy old man who can’t live in peace with the actions that he committed.

Walt is an old man that is in a place where according to him, there isn’t something that someone can do that will reach to his standards. Throughout the movie, Walt seems incapable of speaking to his son’s without criticizing their every thought. When his two sons, Mitch and Steve Kowalski, talk at their mother’s funeral Steve says to Mitch, “The point I’m trying to make is that there’s nothing anyone can do that won’t disappoint the old man, its inevitable” it’s a struggle of the old generation which is Walt, and the generation that followed him, his sons.

Walt can be said that he is more a patriot rather than a racist. But he is both and tries his best to make it known to the others. He is proud of his patriotism and watches helplessly as their neighbourhood is becoming a ghetto of other ethnic groups who seek only violence and just tear apart the neighbourhood in which he lives. Even now with the loss of his wife, he won’t allow his self to admit that he is alone, he has too much pride to do that.

Walt saves Sue from a group of African Americans who were bothering her. He pulls out his gun and makes them leave her alone. Now Sue is a witty girl, and on the ride back to the house they start to engage in a conversation. Walt wasn’t polite but as I said Sue is a witty girl and she answered him in ways that were humorous. From that point on is where he starts to have a bond with the rest of the family as well. After this incident Walt starts being fond of the family.

Later he is being invited to a barbeque that they are having. At first he didn’t want to go but with Sue, he changed his mind and went. As they start to eat and talk, sue lets him in in the various traditions that they have and their meanings. Later by not knowing he taps one of the small children in his head, something which is considered very rude. Sue explains to him that it’s believed that in the head is where the soul of the person resigns. Also that it’s impolite to stare, but then he sees the family doctor staring at him. Then sue talks to him and he wanted to read Walt. He told him that he lives in a life of pain and suffering and if he continues in this way he won’t have piece in his life. this family doctor and father Janovich are in a way trying to lead him to have a peaceful life.

In all honesty, I believe the ending of this film was noble. Walt sacrifices his life in order to save Thao and Sue’s family from further harm. His courageous act not only places the entire Hmong gang behind bars, but also ends the conflicts between the Thao and his cousin who is the gang leader. He goes and faces them and In a way makes them kill him and now because they have witnesses Thao, Sue and their family won’t be bothered with again. Overall, I thought Gran Torino was an empowering movie. The film depicts actual scenarios of cultural conflict that can be found in today’s world, especially racism and small kids joining gangs. 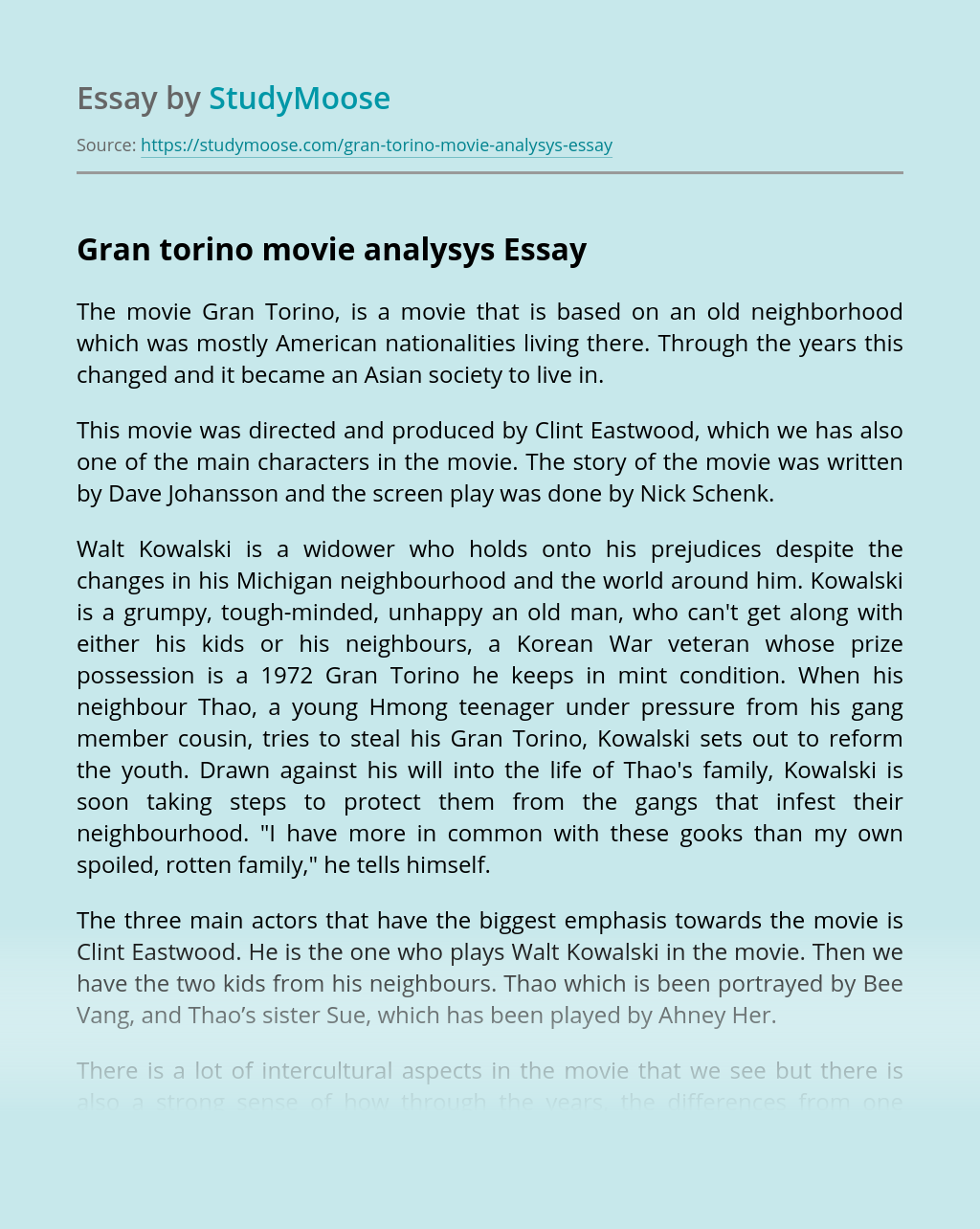 Susan Glaspell’s Trifles is a play about a murder mystery that is loosely based on an actual murder case that the author covered while working as a reporter for the Des Moines Daily News (Ben-Zvi 143). Since the play is written in 1916, a time when the boundaries between the private and public spheres are...

The Birds: Movies Vs. Short Stories

Both Alfred Hitchcock and Daphne du Maurier had a version of a story titled The Birds. Though both stories share a name theyre are completely different. One is a short story by Daphne du Maurier about a man, Nat, and his family who live and England and are attacked by birds. The other a movie...

Changeling is a 2008 inspiring film directed by Clint Eastwood. It is based on an American drama known as the “Wineville Chicken Coop”. Christine Collins, played by Angelina Jolie, is a single mother in the 1920s whose son mysteriously goes missing. The film goes on a journey with Collins leading her to discover the corruptness...

In this essay, I am going to compare and contrast three significant events in the film of 300. First, I will discuss the events leading up to the historical battle at Thermopylae. Then, I will compare the movie version battles at Thermopylae with historical accounts. Finally, I will contrast events after Thermopylae between the movie...

Explain two of the main ideas/themes revealed in the film you have studied and show how these have been conveyed. When people feel that they do not belong, they tend to try their hardest to befriend their peers surrounding them. They also do not want others to have negative views of them due to prejudice....