Hello and welcome to this workshop on writing a monologue on the film, Gran Torino, from 2009, with Clint Eastwood who stars and directed in the film. This workshop will show what techniques are used in writing a monologue. This monologue will be written from Ashley’s point of view. As well as showing what the character, Ashley Kowalski is feeling at the time when her and her family are at the funeral of her grandfather, Walt Kowalski, also the part after the ceremony when there is the reading of the will, and who gets to keep Walt’s car, the Gran Torino.

Don't use plagiarized sources.
Get Your Custom Essay on Gran Torino Monologue Just from $13,9/Page

Ashley of course wants the Gran Torino, but does not end up getting it, and instead Thao, Walt’s neighbour, gets the car. I can’t believe this. Why didn’t I get the car, I mean it pretty much belongs to me because I am the eldest out of my brothers and I so I’m pretty much the rightful owner.

Instead, that kid who was my grandfather’s neighbour got the car, which is completely unfair. I don’t even know him, and I don’t understand why my grandfather would become friends with him, and how, I mean he was a grumpy old man, he was rude and didn’t care about any one so it didn’t make any sense. How could he end up with his car? My car, it should belong to me, I am the one who wanted the car. I even asked my grandfather if I could have his car when he died, mainly because I needed a car so I wouldn’t have to waste money buying my own, but also because it’s an awesome looking car.

I wish that I had been able to persuade him before he died into giving me his car. By the way the car had looked, I think that my grandfather didn’t even drive in the car, because it was in really good condition. My mother and I had already talked about the car, she said that I would be the one to get the car. I had already told her that I asked grandfather about the car, and what he wanted to do with it after he died. I had asked him about the car at my grandmother’s funeral, that’s when I found out that he had the car. I tried to be nice when I asked for the car because I really wanted it. I am quite popular at school and having a car like this would be great for my image. Girls like me at school and in town have cars or are about to get them so I should be getting one, it only makes sense.

I was disappointed that my grandfather was dead. I can tell that my dad and my grandfather weren’t close, they hardly saw each other. I wish that they had been closer, so then grandfather would have definitely given me the Gran
Torino. We were at the church for a long, long time, just talking about my grandfather, it was very uninteresting. About the time when the priest came out I was already getting annoyed he was saying things like how my grandfather knew a lot about life and death, what does that even mean? I don’t know, and frankly I don’t care. I just wanted to hear the reading of the will, it was killing me that I had to wait for so long to hear it.

When the ceremony was finished I was the first one up and out, finally it’s over. After the ceremony my family and I went to the place where they were going to read the will, this is what I had been waiting for, I was thrilled. When we got to the will reading place I just couldn’t wait until I got my hands on the keys to my future car, I started to skip into the office but then my mother stopped me and said that I shouldn’t because I should be in grief, but how can I be depressed when I am about to get my own car. I acted so it looked like I was sad on the inside, but truthfully I was overjoyed.

I had to sit through the whole entire will reading to get to the part about the Gran Torino. I noticed that over my shoulder in the corner was standing that weird Asian kid who lives next door to my grandfather’s house, I was puzzled as to why he was in the room but I thought that he must be there only to be jealous when I was going to get my car.

I thought to myself, maybe the reason that my grandfather died was because of him, maybe he had something to do with his death, and if this is true then why is he here? He shouldn’t even be in the same building. I wasn’t listening to the man telling us my grandfather’s final wishes, I heard him saying something about his house and charity or something, but I didn’t really care. Then the man started talking about the Gran Torino, I was so anxious about it, but I don’t know why because I knew that it was going to be mine. The man said that my grandfather was giving it to his friend; I wouldn’t have referred to myself as ‘my friend’, but I guess that I will accept that for the car.

When the man said that the car was being given to Thao, at first I thought it was a mistake but then the man went on about how Thao couldn’t do anything to it. I was so shocked; I thought that it was completely unfair. I mean I have known my grandfather since I was born, well I’ve been alive when he has, and I’m even related to him and the boy only knew him for a week or something. I couldn’t believe that I didn’t get the car; I told my grandfather that I wanted it. I hope that the kid does something to it so it becomes mine. 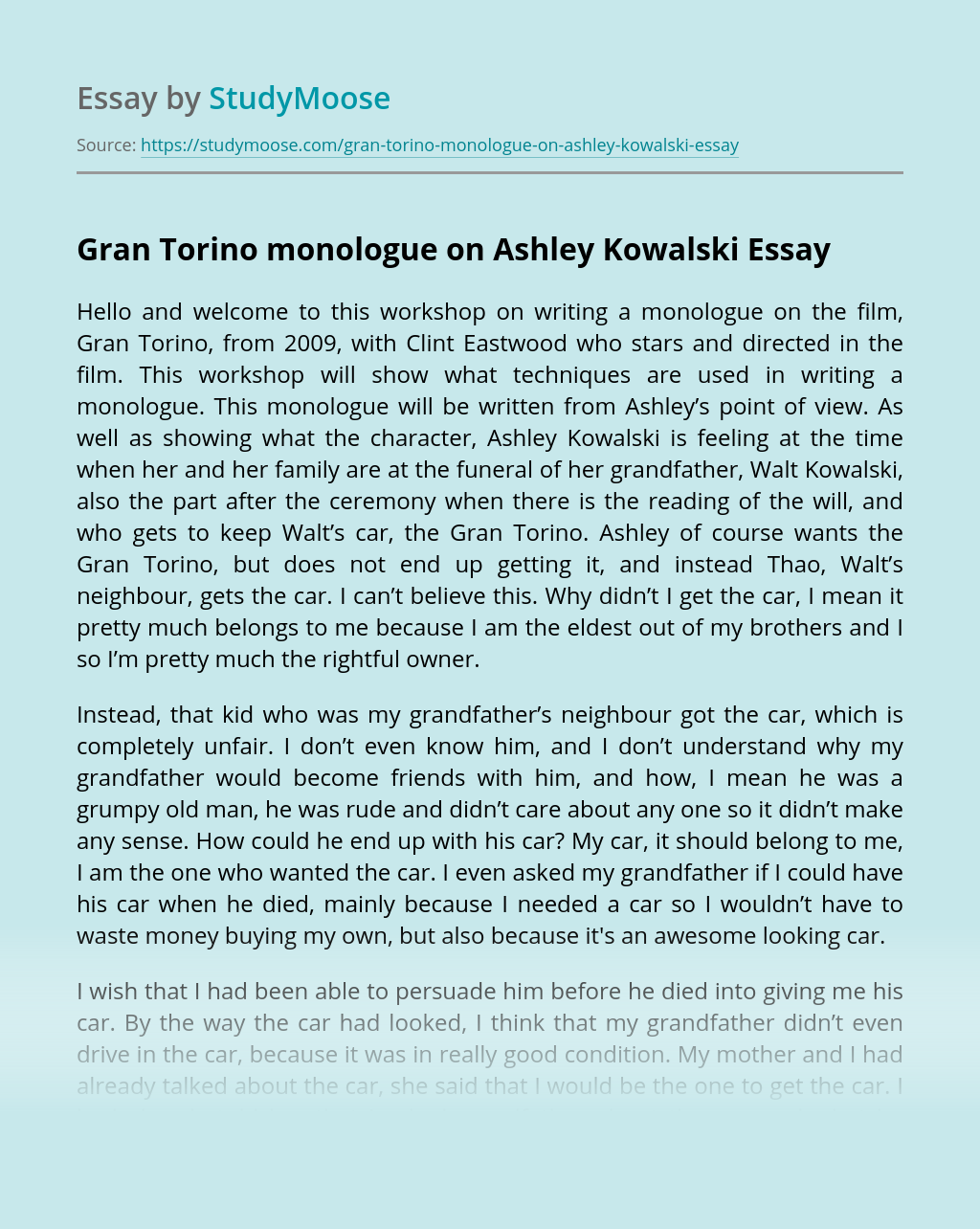 Rate this post Jackie Chan was born in 1954, the son of a poor couple who had just come to Hong Kong from the Province of Shandong, China. When he was born, his parents could barely raise the money for the hospital bill, and were almost forced to adopt him out to the delivering doctor....

Rate this post Going back to as far as we can remember there has always been a battle between good and evil or right vs. wrong. At the end of the day we are all faced with a moment where we must make a decision. A series of made decisions will, as a result, mold...

Get Essay
“Digging” by Seamus Heaney

Rate this post In many families, fathers take pride in receiving remarks regarding their sons such as “He’s a chip off the ol’ block” or “like father like son,” often exalting the sons who have followed in their fathers’ vocational footsteps. In “Digging,” by Seamus Heaney, the speaker describes the quintessential potato farming tradition that...

Rate this post Michael Ondaatje’s “Elizabeth” portrays the life of the English Queen Elizabeth I. Ondaatje fuses prose and poetry, fact and fiction, realism and surrealism. The effect of this fusion creates a high degree of dramatic realism. It illustrates the progression and transition from childhood to adulthood. The Poem opens with a young Elizabeth...

Rate this post Belonging is a complex experience that explores relationship, place and identity. Belonging is clearly shown, in each of the above mentioned themes, in the film “Strictly Ballroom” by Baz Lurhman and the non-fiction extract “Home: The Heart Of The Matter” by Peter Read. Belonging is demonstrated through various techniques, which shows various...

Rate this post Soldier Boy is a book about a young kid called Jim Martin, and how it was his dream to join the army and battle with the Australian performers. However, Jim Martin was no common soldier to join the military; he was the youngest at 14 years of age. The topic, which I...