According to Fromkin (2011), grammar translation is a technique or method of second-language learning in which the student memorizes words and syntactic rules and translates them between the native language and target language. In other words, grammar translation method is a foreign language teaching that requires students to translate words and memorize. The goal is to make sure that the student able to read and translate the target language.

Grammar translation method is a traditional method and was originally used to teach ‘dead’ languages (and literatures) such as Latin and Greek, involving little or no spoken communication or listening comprehension.

Don't use plagiarized sources.
Get Your Custom Essay on Grammar Translation Method Overview Just from $13,9/Page

Language learning is an upright intellectual workout for students.

Knowledge of the target language and mother tongue would endow students mentally and it was predictable that students would probably never use the target language but the mental exercise of learning it would be useful anyhow. Many methodologies to second or foreign language teaching have been developed over the years. There are two broad categories that fall from second-language teaching method: the synthetic approach and analytic approach.

Synthetic method emphases on the teaching of grammatical, lexical, phonological and functional units of the language step by step. This is a bottom-up method, a method that begins with the small units like phones and proceeds stepwise to increasingly larger units and often ending in a semantic interpretation. On the contrary, analytic approaches are more top-down. Top-down is a method that begins with the assumption that a large syntactic unit such as a sentence is present and the analyses it into successfully smaller constituents which are compared with the sensory or acoustic data to validate the analysis.

With the aim of clarifying, grammar transmission method or GTM can be traced by its certain features. GTM characteristics and principals are: * Translation of a literary passage * The ability of communicating in the target language is not a goal * Memorization * The primary skills to be improved are reading and writing * Its focus is on accuracy, not fluency * The authority in the classroom is the teacher Therefore, by following all this features; classes should be taught in the mother tongue or student’s native language, with little active use of the target language or second language.

Much vocabulary is taught in the form of lists of isolated words, along with long elaborate explanations of the intricacies of grammar. Grammar provides the rule for putting words together, and instruction often focuses on the form and inflection of words. The reading activity of reading difficult classical texts is begun early and little attention is paid to the content of texts, which are treated as exercise in grammatical analysis. 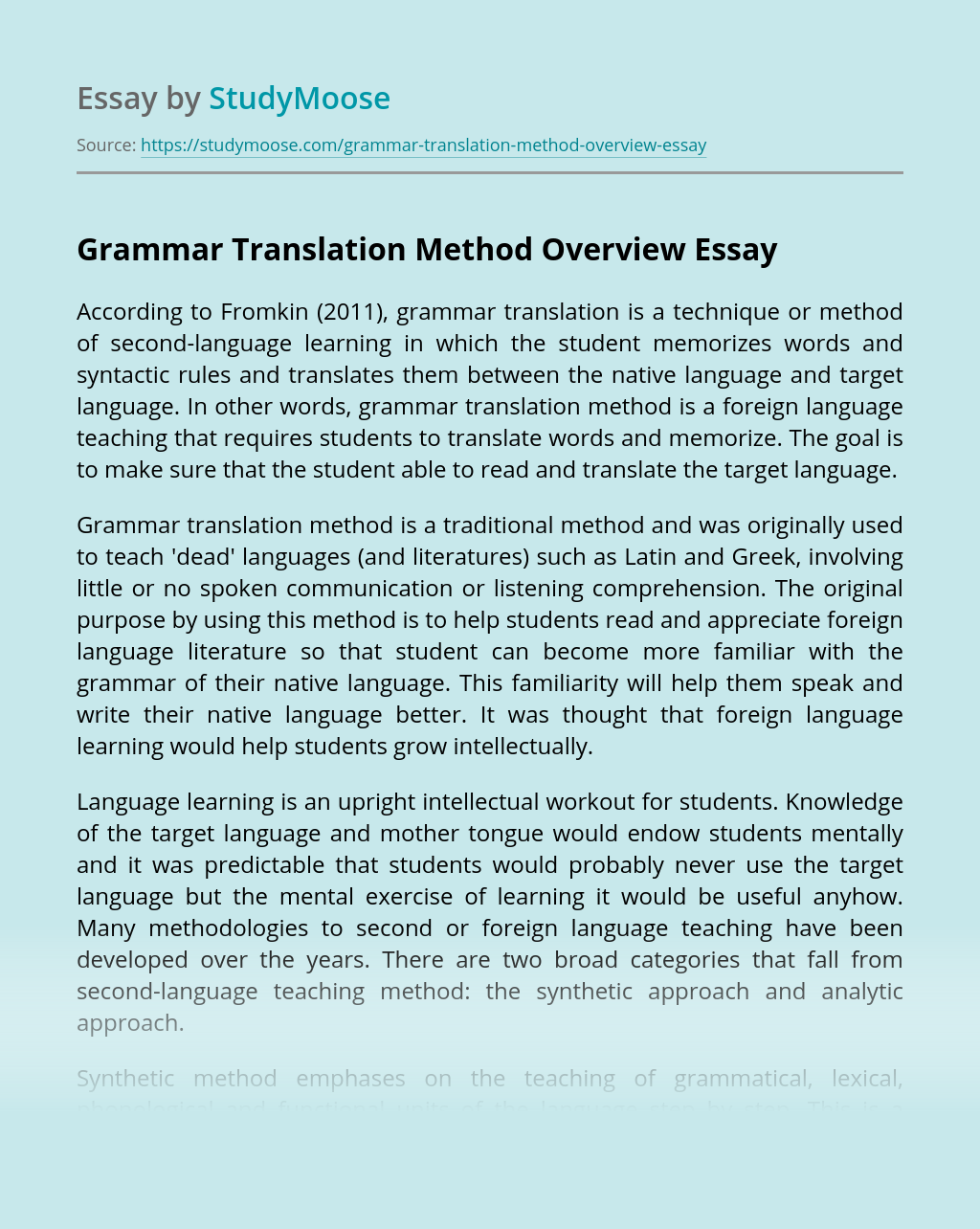 There are many different challenges that Stanley Yelnats (the main character) from the bestselling novel Holes written by Louis Sachar has to over come. Stanley was first seen in the movie when a tilted shot of shoes hit him in the head and he fell on the ground portraying he was weak and a bit... VIEW ESSAY

As modernization evolve, so is technology. People are finding faster, and easier methods for communicating with friends and loved ones. There are many forms of communication, however, I will be comparing face-to-face and social media interactions. Face-to-face interactions are becoming less prevalent today. Social media tools such as Facebook, WhatsApp, and Instagram, has taken over... VIEW ESSAY

View sample
Get Essay
The Most Dangerous Game: Character Analysis of General Zaroff

?General Zaroff’s refined emotions conceal a disturbing desire to inflict suffering and death for his own amusement. In many ways, Zaroff considers himself a god who can go about life as he pleases. Zaroffs’s madness stems from a life of wealth, luxury, and militarism, which inflate his ego and sense of entitlement and impose few... VIEW ESSAY

Introduction: We are very proud because the UNESCO gas declared the 21st February as the International Mother Language Day. Don't use plagiarized sources. Get Your Custom Essay on Grammar Translation Method Overview Just from $13,9/Page Get custom paper It is such a prestige that we cannot find the right words to express our sense of jubilation.... VIEW ESSAY

On the exterior it seems that Dougy, the book, is all about racism. However when you delve further into Dougy, many other strong messages come across. Some that stand out are finding yourself, appreciating what we have and, most strongly, having an open mind. At the beginning Dougy, the boy, is timid, unsure of his... VIEW ESSAY