Complete this teacher-scored portion of the Unit Test, and submit it to your teacher by the due date for full credit. (20 points)

After the fall of the Western Roman Empire the world continued to see the legacy of Greek and Roman influences.

Turn in your highest-quality paper
Get a qualified writer to help you with
“ Graded Assignment: The Western Classical World Unit Test ”
Get high-quality paper
NEW! AI matching with writers

The Roman Empire brought civilization to people through the acculturation of Greek ideas and concepts. Rome’s legacy is evident today in laws and government that still create and inspire legal practices in the modern world based upon the “The Twelve Tables”. The Twelve Tables apply equality to all members of society just as today’s society is protected by current laws and Constitution. For example one human right that we all know is the premise, “One is innocent until proven guilty”.

The importance of law in our modern Government is represented by legislative bodies protecting human rights which were built and based upon Roman models.

In this essay I will briefly describe the factors that led to the decline and fall of the Western Roman Empire. One of many factors that contributed to the fall of Western Roman Empire is the increasing use of mercenaries and paid soldiers by the emperor to defend the borders and frontiers. As the empire expanded Roman troops were no longer adequate in numbers to defend all frontiers. This paid military tactic was continued regardless of its economic hardship and depletion of Western Rome’s treasury. Fighting on Rome’s frontier served to be expensive in many ways. Trade and travel was dangerous. Farmer’s fields were severely damaged causing a depletion of agricultural production.

Trade prices sky rocketed covering everything from grain to jewelry. Epidemics such as Dysentery, Small Pox, and other diseases swooped through the population killing over seven million people. Rome’s leaders had thought minting more coins and reducing the amount of silver in each coin would increase revenue. Instead the coins lost more than 50% of their value creating a rapid inflation effect. In an attempt to counteract inflation citizenship was extended to all free inhabitants of the empire. Regardless of this effort citizenship carried burdens of paying taxes to support the empire which was obviously deteriorating. 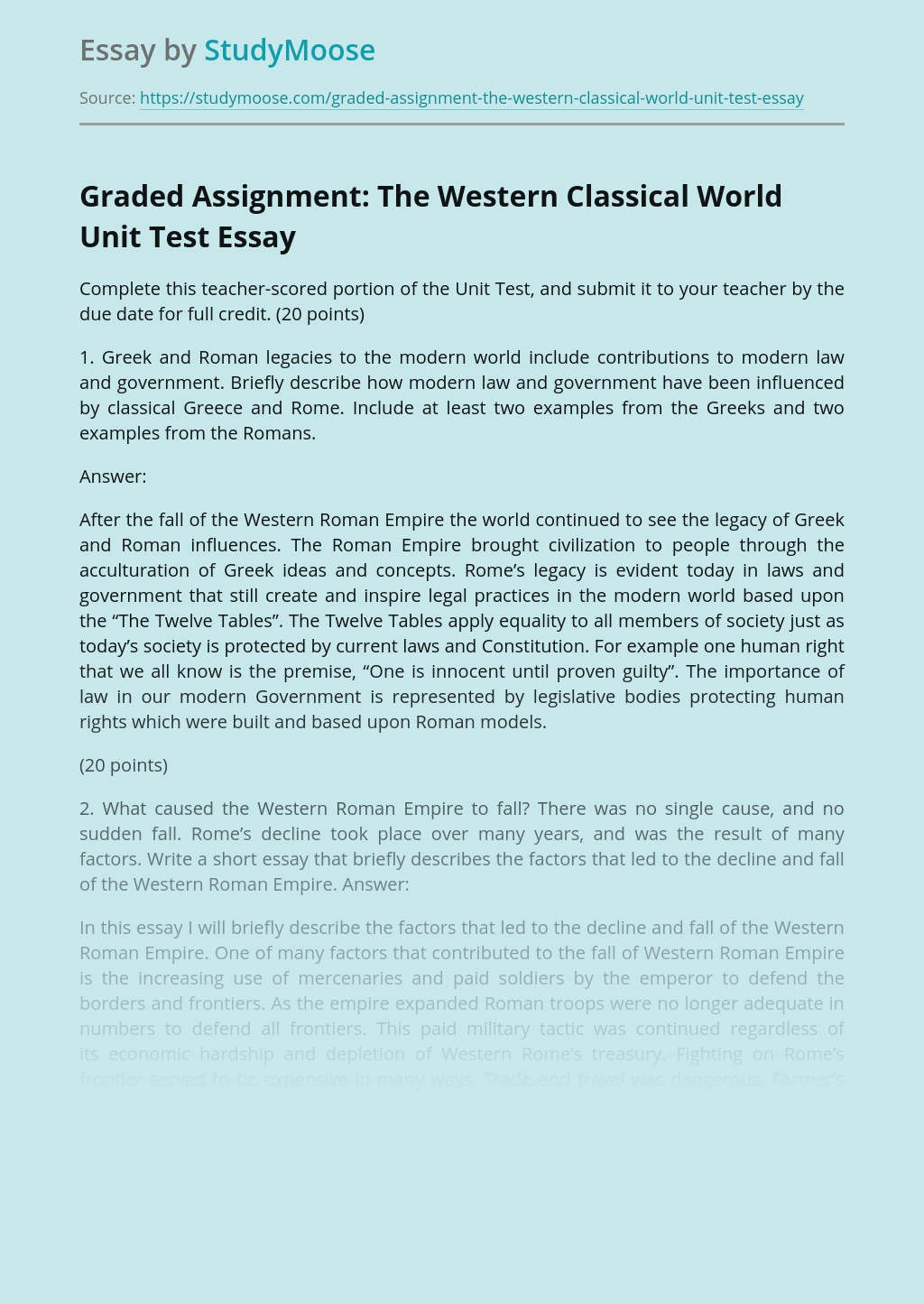 Turn in your highest-quality paper
Get a qualified writer to help you with
“ Graded Assignment: The Western Classical World Unit Test ”
Get high-quality paper
Helping students since 2015
Stay Safe, Stay Original