The Government of Pakistan is a federal government established by the Constitution of Pakistan as a centralized governing authority of the four provinces of a proclaimed and established parliamentary democratic republic, constitutionally called the State of Pakistan. The order of operations constitutes a Westminster system, and it comprises three branches of government: the executive, the legislature, and the judiciary. The executive branch is headed by the Prime Minister of Pakistan, who is a chief executive (Head of Government) and exercises his or her power on officers subordinate to him or her.

Don't use plagiarized sources.
Get Your Custom Essay on Government of Pakistan Just from $13,9/Page

The President of Pakistan is merely afigurehead and Head of State who is a civilian commander-in-chief of the Pakistan Armed Forces and holds ceremonial powers to fulfill the constitutional requirements; the President’s appointment and tenure is dependent, constitutionally, on the Prime Minister’s term. The Parliament(Legislature) consists of a lower house (National Assembly) and an upper house (Senate), as well as the President. The judicial branch consists of aSupreme Court (its apex), five provisional high courts, numerous other district courts a specially designated anti-terrorism court, a Sharia court, and the Green Court.

The Electoral College, composed of the Senate, the National Assembly, and the four Provincial Assemblies, chooses a President, through indirect elections, for a five-year term. The Prime Minister is a supreme leader of the majority party (or director of the coalition government) in the National Assembly and is assisted by a cabinet of ministers drawn from both chambers of the Parliament.

Allies of President Pervez Musharraf withdrew their candidate for Pakistan’s Prime Minister, Farooq Sattar, and the coalition chose Syed Yousaf Raza Gillani as the Prime Minister of Pakistan, who was sworn in on 25 March 2008 by President Pervez Musharraf.[5] On 7 August 2008, the Pakistan Peoples Party and the Pakistan Muslim League (N) agreed to force Musharraf to step down and thus, begin his impeachment. Asif Ali Zardari, Rehman Malik, Altaf Hussain and Nawaz Sharif announced sending a formal request or joint charge sheet that he steps down, and impeach him through parliamentary process upon refusal. Musharraf accordingly delayed his departure for the Beijing Olympics by a day. Currently, the seat of Prime Minister was occupied by caretaker Mir Hazar Khan Khoso, who was appointed by the Election Commission of Pakistan on 24 March 2013, following the completion of the Pakistan Peoples Party-led government’s term the same year.

The Pakistani National Assembly is the lower house of the bicameral Majlis-e-Shura, which also comprises the President of Pakistan and Senate (upper house). The National Assembly and the Senate both convene at Parliament House in Islamabad. The National Assembly is a democratically elected body consisting of a total of 342 members who are referred to as Members of the National Assembly (MNAs), of which 272 are directly elected members and 70 reserved seats for women and religious minorities. A political party must secure 172 seats to obtain and preserve a majority. Members are elected through the first-past-the-post system under universal adult suffrage, representing electoral districts known as National Assembly constituencies.

* Federal ministries Provincial governments * Balochistan * Islamabad Capital Territory * Khyber Pakhtunkhwa * Punjab * Sindh * Kashmir * Gilgit–Baltistan Local governments * Districts * Tehsils * Union Councils * Divisions (abolished in August 2000) Kashmir governments * Government of Azad Jammu and Kashmir * Northern Areas Government President and Parliament Under Article 50 of the Constitution, the Majlis-i-Shoora (Parliament) of Pakistan consists of the President and two Houses to be known respectively as the National Assembly and the Senate. The President is elected by members of both Houses of the Parliament and the Provincial Assemblies.

The President may be removed from office or impeached through a resolution, passed by not less than two-thirds of the total membership of the Parliament in a joint sitting of the two Houses, convened for the purpose. The Constitution empowers the President to dissolve the National Assembly in his discretion if a situation has arisen in which the Government of the Federation cannot be carried out in accordance with the provisions of the Constitution and an appeal to the electorate is necessary.

The President in case of dissolution of National Assembly shall within fifteen days of the dissolution refer the matter to the Supreme Court and the Supreme Court shall decide the reference within thirty days whose decision shall be final. However, the Senate is not subject to dissolution. In case the office of the President becomes vacant for any reason, the Chairman, or if he is unable to perform the functions of the office of the President, the Speaker, acts as President till such time that a President is elected. Same is the case when the President by reason of absence from Pakistan or any other cause is unable to perform his functions.

The bicameral federal legislature is the Majlis-i-Shoora (Council of Advisers), consisting of the Senate (upper house) and National Assembly (lower house). Members of the National Assembly are elected by universal adult suffrage (over eighteen years of age in Pakistan). Seats are allocated to each of the four provinces, the Federally Administered Tribal Areas, and Islamabad Capital Territory on the basis of population. National Assembly members serve for the parliamentary term, which is five years, unless they die or resign sooner, or unless the National Assembly is dissolved.

Although the vast majority of the members are Muslim, about 5 percent of the seats are reserved for minorities, including Christians, Hindus, and Sikhs. Elections for minority seats are held on the basis of joint electorates at the same time as the polls for Muslim seats during the general elections. The prime minister is appointed by the president from among the members of the National Assembly. The prime minister is assisted by the Federal Cabinet, a council of ministers whose members are appointed by the president on the advice of the prime minister.

The Federal Cabinet comprises the ministers, ministers of state, and advisers. The Senate is a permanent legislative body with equal representation from each of the four provinces, elected by the members of their respective provincial assemblies. There are representatives from the Federally Administered Tribal Areas and from Islamabad Capital Territory. The chairman of the Senate, under the constitution, is next in line to act as president should the office become vacant and until such time as a new president can be formally elected. Both the Senate and the National Assembly can initiate and pass legislation except for finance bills.

Only the National Assembly can approve the federal budget and all finance bills. In the case of other bills, the president may prevent passage unless the legislature in joint sitting overrules the president by a majority of members of both houses present and voting. Other offices and bodies having important roles in the federal structure include the attorney general, the auditor general, the Federal Land Commission, the Federal Public Service Commission, Election Commission of Pakistan, and the Wafaqi Mohtasib (Ombudsman).

Pakistan’s four provinces enjoy considerable autonomy. Each province has a governor, a Council of Ministers headed by a chief minister appointed by the governor, and a provincial assembly. Members of the provincial assemblies are elected by universal adult suffrage. Provincial assemblies also have reserved seats for minorities. Although there is a well-defined division of responsibilities between federal and provincial governments, there are some functions on which both can make laws and establish departments for their execution. Most of the services in areas such as health, education, agriculture, and roads, for example, are provided by the provincial governments. Although the federal government can also legislate in these areas, it only makes national policy and handles international aspects of those services.

At the national level, Pakistan elects a bicameral legislature, the Parliament of Pakistan, which consists of a directly elected National Assembly of Pakistan and a Senate, whose members are chosen by elected provincial legislators. The Prime Minister of Pakistan is elected by the National Assembly. The President is elected by the Electoral college, which consists of both houses of Parliament together with the provincial assemblies. In addition to the national parliament and the provincial assemblies, Pakistan also has more than five thousand elected local governments. Elections in Pakistan are conducted under the supervision of Election Commission of Pakistan. The country offers a multi-party system, with numerous parties. 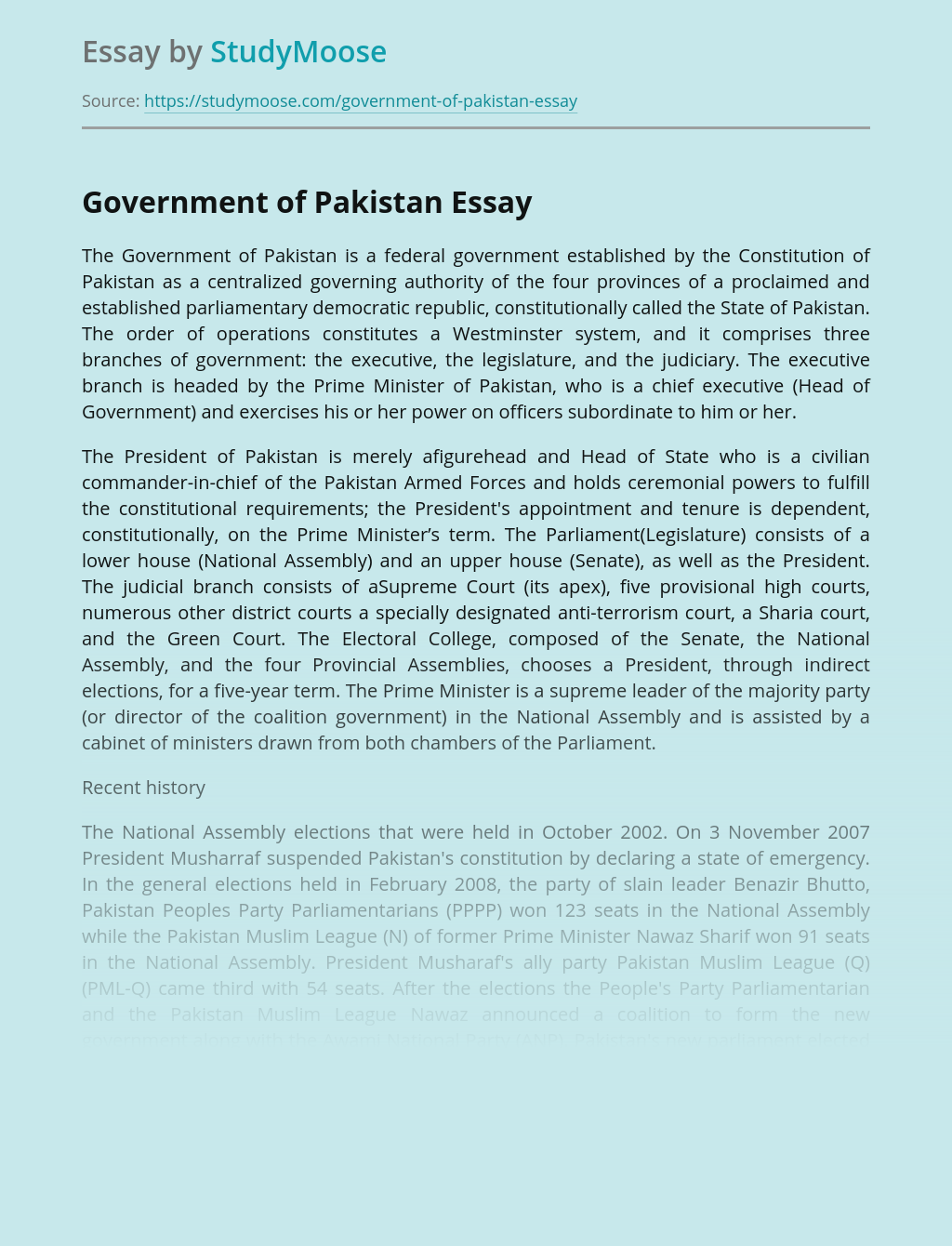 Kashmir has been fighting for freedom for more than 65 years now and on the other hand pakistan has been desperate to bring it under its administration and control since the independence ! Not only pakistan but there have been border disputes with china also that from too pre-independence times . People of kashmir want...

Holy Shrines in Khairpur Posted on January 11, 2012 [pic] Khairpur is the twelfth largest city in the province of Sindh in southeast Pakistan. It was founded in 1783 by Mir Sohrab Khan, who established the Khairpur branch of the Talpur clan. Khairpur Sindh is known as the Gateway of Islam, Baab ul Islam,  Muhammad...

View sample
Get Essay
How Does Changez Change in the Reluctant Fundamentalist?

“I had actually changed; I was looking about me with the eyes of an immigrant.” How does Changez alter throughout the novel? The Unwilling Fundamentalist discovers two stopped working love affairs, one with a person and the other with a country. Changez – the dazzling kid from Lahore, who was raised in a utopian background...

View sample
What Can I Do to Improve My Country

Pakistan came into being 14 august 1947.we think that we are independent. but the reality is not like that how we think because our politician come in the government and say that we are relevant with the problems of Pakistani people but in such they are just making money and transfer it in Swiss banks....