It is widely acknowledge that the public service since the country independence has failed to realize the purpose for which it established. While its size, role, and consumption of the national budget, and activities have grown over to make the public sector the largest employer in the formal sector. It has failed to executive government policies effectively and delivers goods and services to the nation.

Its productivity/ output has inimal inspite of the caliber of people (i. e. the competence, skill, ability, work or qualification of the people) manning/ managing the public sector services (either in government directly (politicians) or indirectly (that is, reading/ managing government ministries and department).

Turn in your highest-quality paper
Get a qualified writer to help you with
“ Government Issues in Nigeria Public Administration ”
Get high-quality paper
NEW! AI matching with writer

Over the years, the public sector has been criticized by successive governments, the private sector and the Nigerian people from all works of life for its failure to perform.

Even international or agencies institutions such as the word bank and the international monetary fund (IMF), have expressed concern that this important and indispensable government institutions, which is established to play a pivotal role in the task of nation building, modernization, economic development, and extension of social services, has failed miserably to justify it’s existence despite the high amount of the nation’s total budget consumed by the public sector yearly.

The Nigerian public officials have excelled and rooted in all of the above stated abused among others, that abuse is assumed or norm for instance, former governor Joshua Dariya of Plateau State, a professional accountant, was being investigated by both the British and the Nigerian authorities for 13 offences, which include money laundering and looting and other official crimes summed up to ? 2,680,000. (This day news, January24, 2005). And according to (The Nigerian guardian, Nov. 23, 2003) the former Nigeria petroleum minister, Dan Danzia Etete, had used his position to obtain a secret commission running to about us$4 million.

There had been cases of accountants, auditor, lawyers etc. In connection with financial crimes and looting (see Nigerian guardian, Jan. 25, 2004, the punch, Nov. 23, ’05). The above cases, were that of competent and qualified professionals who on merit were appointed or selected to service the public but who abuse that merit and office for selfish interest (special – meritocracy). And many in the various public services today are abusing merit, even, the so-called meritocrats consider the power sector public hearing, the formal minister of finance indicted Imoke and Obasanjo for not following the process in awarding and paying for contract. 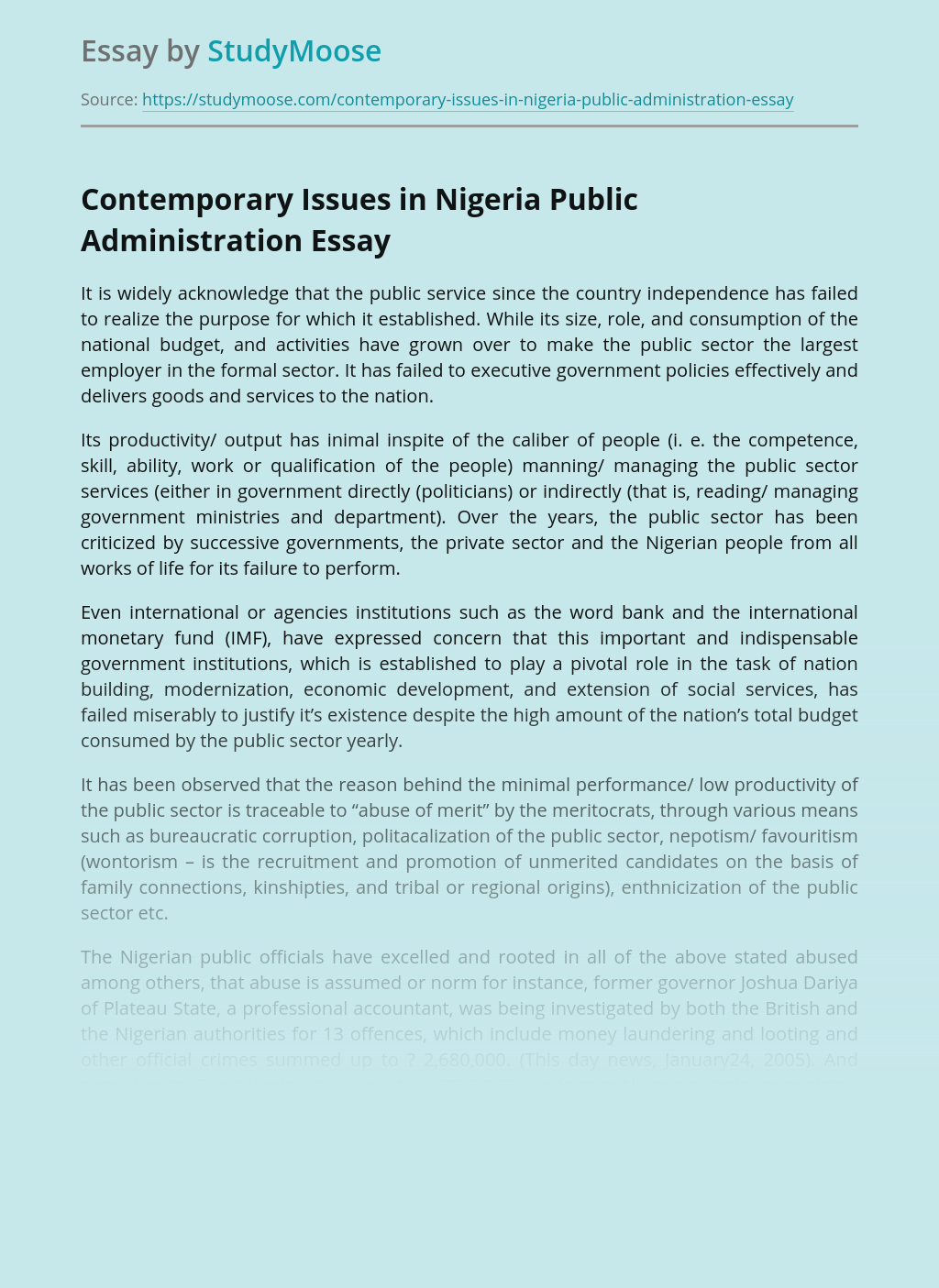 Turn in your highest-quality paper
Get a qualified writer to help you with
“ Government Issues in Nigeria Public Administration ”
Get high-quality paper
Helping students since 2015
Stay Safe, Stay Original