This term “Gothic and Lolita” is used by the Japanese to describe a sub-culture of teenagers who wear a wide range of fashions. It is used by English language sources mainly to describe a specific subset of Lolita fashion. However, the term Gothloli (gosurori) is used by some foreigners to describe anyone in gothic or lolita style. It is quite difficult to exactly describe Gothic Lolita style, because most of the Lolita fashion styles are very often combined into very fascinating design.

Don't use plagiarized sources. Get your custom essay on
“ Gothic Lolita Fashion and Style ”
Get custom paper
NEW! smart matching with writer

But in basic description we can say, that Gothic Lolita style is the most expanded style and it features in basics of Goth fashion, from western countries, and combines Lolita fashion from Rococo and Victorian Ages of 19. century. These factors are not only ones, which gave Gothic Lolita style its own look. With taht is based fact, that Gothic design was spreaded together with Visual Kei. Together with that, there was big influence from various manga books, which contained specific drawing styles and inspired several lolita styles.

The most influecne was just from around 1999 year, when Mana formed his own design of Gothic styles and designated way of Gothic Lolita style. He coined his own clothing line Moi-meme-Moitie and style called Elegant Gothic Lolita. It can be considered a more mature version of Gothic Lolita, often worn by older teens and young women. The male ‘counter-part’ to EGL is EGA (Elegant Gothic Aristocrat); it is very tailored and stream-lined, both being mostly black and white.

However, Gothic Lolita style was popularized in the fall of 2nd millenium, the Lolita fashoin had tradition from 70’s (Milk and Pink House) and later brand Baby the Stars Shine Bright (1979 – Sweet Lolita style).

After Mana, there are others influential figures in the scene: the singer Kana, who often modeled for Lolita related fashion magazines, and Mitsukazu Mihara, who drew the first eight covers of the Gothic & Lolita Bible.

Gothic Lolita is the best-known of the various “Lolita” looks. Other categories include “Classic Lolita”, which is often more mature-looking and contains more muted colors and floral prints and “Sweet Lolita” which is identified by childish pastel colors and cute prints. Gothic Lolita applies the aesthetics of Gothic fashion to the childlike, pretty Lolita fashion. The word Gothloli comes, quite naturally, from a combination of Lolita and Gothic fashion. Gothic Lolita style is usually a combination of black and white, often black with white lace and typically decorated with ribbons and lace trims.

Skirts are knee length and may have a crinoline or petticoat to add volume. As in mainstream Japanese fashion, over-knee socks or stockings are popular. White or black tights are also common. Boots are often with platform and their tops are rounded. Some additions may include mini top hats, parasols, and lace headdresses, which resemble wide, elegantly decorated headbands. Other popular Lolita headgear are ribbons, lace or bows, an alice band with a bow or sometimes even a bonnet.

The next magazine with very similar orientation is Gosurori. In this magazine there are not only a sewing tips and methods but even patterns (as you can see). In all this publications there are various brands of clothes and well-known companies that making Lolita fashion. Major brands are not only focusing on one Lolita style, but they have very large offer from several styles. For example: Metamorphose temps de fille, Angelic Pretty, h. Naoto, Baby The Stars Shine Bright, Moi-meme-Moitie.

Gothic Lolita style is also reflected in various manga and anime works, for example Paradise Kiss, Rozen Maiden, Princess Princess, Tsukiyomi – Moon Phase, xxxHolic, and many others works of Kaori Yuki, who is very talented mangaka. In this manga works characters are very often drawn in very beautiful dresses and this has an influence on real fans. They are making their own clothes similar to famous manga and anime works and they’re going to the contests and other conventions. This making of clothes is called cosplay. And even Gothic Lolita style is very popular on this conventions and cosplay contests. However, the Gothic Lolita style should not be considered a cosplay; it is an alternative fashion. 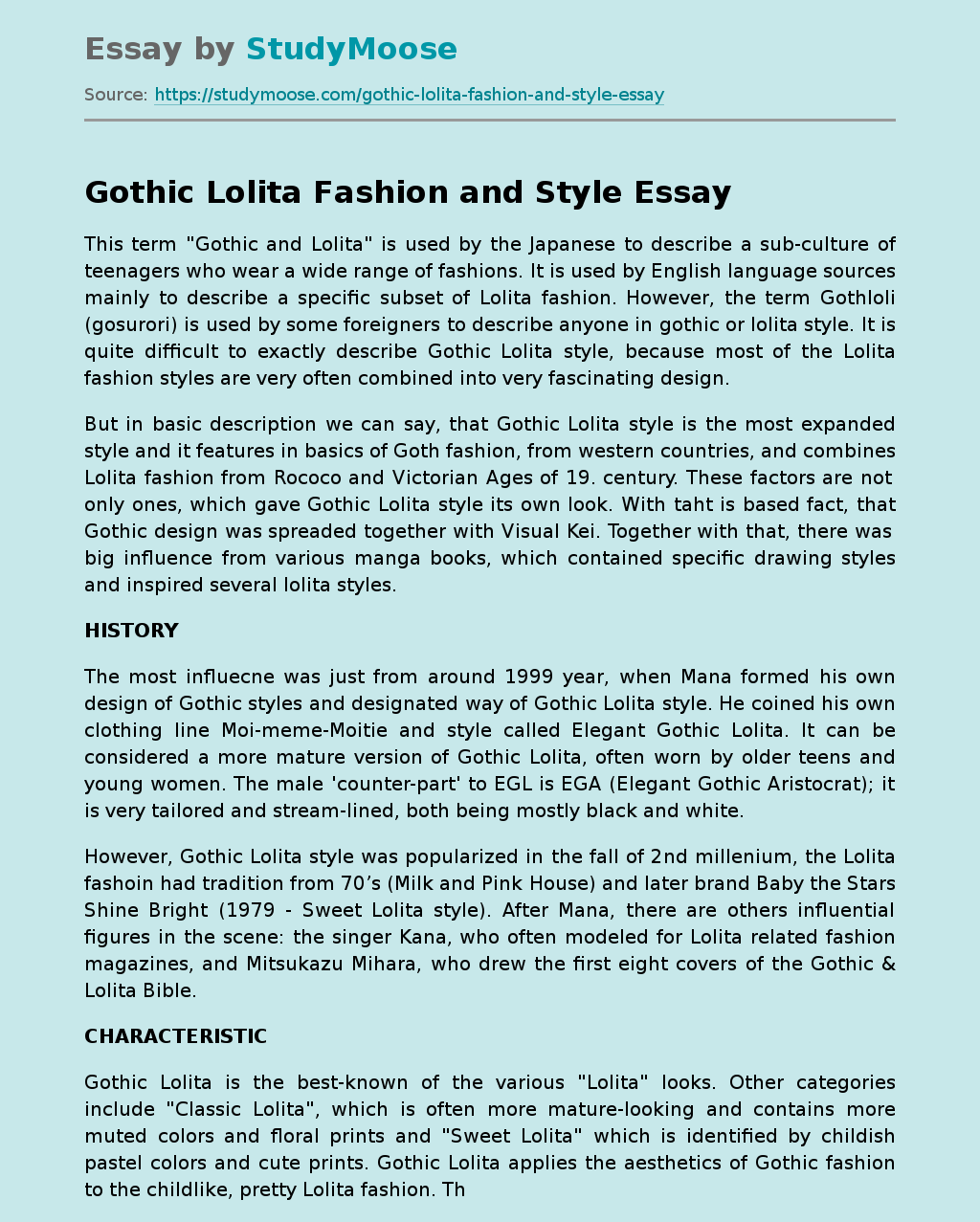