Mary Shelley’s gothic horror novel ‘Frankenstein’, tells the story of an ambitious university student named Victor Frankenstein, who discovers the secret of giving life to inanimate objects, and subsequently creates a monster by using parts of various dead bodies. Throughout the course of the novel, Frankenstein’s monster commits a number of criminal acts, supposedly making it difficult for readers to sympathise with him.

However, some of the monster’s actions, the language that he uses, and the way in which the novel is structured, actually encourage the reader to sympathise with him.

My intention is to explore how and why Mary Shelley creates sympathy for Frankenstein’s monster. The first obvious instance of Shelley attempting to create sympathy for the monster comes at the moment of his “animation” or “birth”. Appalled and unnerved by the living appearance of the monster, Frankenstein instantly rejects him: ‘Unable to endure the aspect of the being I had created, I rushed out of the room’.

This instant repudiation by Victor of his own ‘being’, could evoke pity from the readers as they know that the fact the monster has a repulsive appearance is no fault of his own.

Following the initial shock of seeing the monster in an animated state, Victor retires to bed, but is woken by the monster holding up the curtain of his bed and supposedly reaching out to ‘detain’ him. However, due to the fact that this event is recounted during Victor’s narrative, one gets the impression that Shelley has purposefully made it appear that Victor is recounting this event slightly differently, and in fact the monster’s gesture was not a menacing one, but instead somewhat similar to that of a child reaching out for its parent.

Again, this helps readers to feel sympathy for the monster and also creates a more negative opinion of Frankenstein. The second instance of Mary Shelley creating sympathy for the monster occurs during Victor’s second encounter with him. This meeting comes at a much later point in the novel. After months of suffering from a fever, Victor learns of his brother William’s murder; and the execution of a young girl named Justine Moritz who had been adopted by the Frankenstein household.

Whilst passing through the woods in which his brother was murdered, Frankenstein catches sight of what he becomes convinced is the monster, and instantly concludes that the murder of his brother was the monster’s doing. To ease the grief brought on by the murder of William, Victor embarks on a holiday to the mountains, and it is whilst he is crossing a glacier that he next comes face-to-face with his monster. The setting in which this meeting takes place show Shelley juxtaposing the beauty of “God’s creation” – ‘wonderful and stupendous scene’ – with the hideousness of Frankenstein’s monster – almost too horrible for human eyes’.

Rather than evoke pity, this is perhaps evidence of Shelley’s own thoughts and feelings, with the creation of God being beautiful and awe-inspiring, and Frankenstein’s creation being hideous and wretched. The meeting on the glacier is the first point in the novel where the monster actually speaks. It is here that readers expecting the monster’s dialect to be similar to that of a crude Neanderthal, are shocked by the fact that the monster’s speech is incredibly delicate and eloquent: ‘I expected this reception… all men hate the wretched…

thy creature, to whom thou art bound by ties only dissoluble by the annihilation of once of us. ‘ The fact that Shelley gives the monster such calm, articulate speech, presents Victor to be more of a monster, as he expresses his feelings with hurtful and cruel language – ‘Devil… vile insect… You reproach me with your creation’. Thus Shelley helps the monster to gain more reader sympathy by making him appear more human. It as at this point in the novel that the monster’s narrative begins; this narrative is perhaps the most significant aspect of the novel in helping to gain reader sympathy.

Throughout his narrative, the monster speaks with the same sophisticated articulation, allowing him to express his feelings perfectly, helping the reader to easily empathise with him as they understand him fully. As the monster describes his first moments as a living creature, the reader gains a sense of the monster feeling similar to that of a helpless newborn child, with no knowledge of his surroundings: ‘I knew, and could distinguish nothing. ‘ By presenting the monster as this, unknowing, child-like creature, Shelley again creates sympathy for him, as the reader pities his helplessness and naivety.

Indeed, it is the monster’s naivety that leads him to his first proper encounter with humans. Prior to his encounter, the monster tells of how he ‘often spent the whole day, searching for a few acorns to assuage the pangs of hunger’. I feel that Shelley opted for the monster to mention this, so that when he does stumble across a small hut, longing for ‘food and shelter’, the fact that the hut’s inhabitant runs away with ‘a speed of which his debilitated form hardly seemed capable’, seems slightly harsh to a reader who believes the monster to be close in mindset to that of a newborn baby.

Also, the fact that the reader knows that the monster meant the man no harm, gains their sympathy for him, in the same way that sympathy is gained for a person punished for something that they have not done, and never intended to do. As the monster continues on in search of food, he comes across a village. However he is unfairly greeted by ‘stones’ and ‘many other kinds of missile weapons’. Again this gains sympathy from the reader as they know that the monster’s intentions are purely motivated by his hunger and he has no knowledge of how his appearance makes people perceive him.

Following this experience with humans, the monster flees into the open country and takes’ ‘refuge in a low hovel’, that is adjacent to a ‘cottage of a neat and pleasant appearance’. At this point, the monster’s feelings towards mankind are decidedly negative: ‘miserable… from the barbarity of man’. Here Shelley has created reader sympathy for the monster as they disagree with the treatment he received from the villagers, and they pity the fact he has a negative outlook on mankind.

Yet they also understand why, and therefore empathise with him, possibly for the first time in the novel, as it at this point that the monster, although still with the innocence of a child, has become aware of his own emotions, and possibly begins to understand that he is viewed differently. However, he does not yet understand why. The cottage of which the monster speaks is inhabited by a blind man named DeLacy, and his two children, Felix and Agatha. 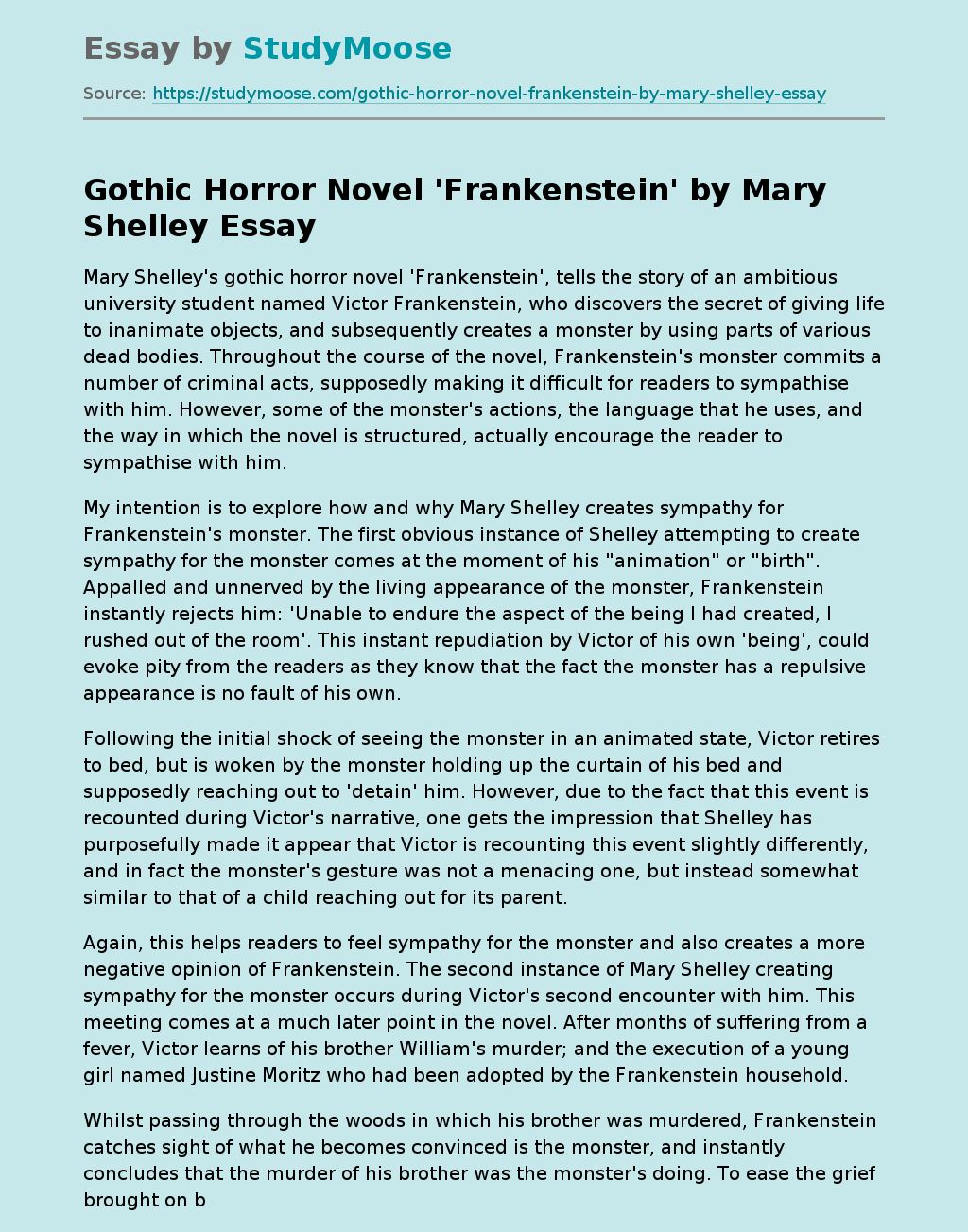