Gothic Style is the most fascinating and mysterious architectural era the world has seen. These large structures of the 11th through the 16th centuries, that are considered to be of Gothic Style, are simply glorious. Throughout the centuries, beautiful medieval cathedrals have been towering above every building and till this day, still survive with their astonishing appearance. The edifices built during the so-called Gothic period were not built with simple identifying Gothic features. Gothic architecture was born of Romanesque architecture altered by the influence of medieval society.

Don't use plagiarized sources. Get your custom essay on
“ Gothic architecture and romanesque architecture ”
Get custom paper
NEW! smart matching with writer

Romanesque and Gothic architecture, although having many similarities, also have many differences. There are some who would regard the first Gothic churches in France as late extensions of the Romanesque building ‘boom.”The Romanesque contributed greatly to the development of highly articulated, expressive exterior and interior design.'(K Conant p. 6) French Romanesque architecture was the antecedent to Early Gothic in France. ‘What remained to be done in creating the Gothic style as we know it was to take the proportion and sophistication of Cluny III, its relatively thin vaulting, its flying buttresses, joining them to the rib vaulting of Durham, and developing the effective features of each.

’ (K Conant p. 291) Romanesque architecture was designed to be more for protective purposes than for any aesthetic quality.

So as not to be destroyed by invaders, the walls of the Romanesque cathedrals were built very thickly. Gothic, on the other hand, had thinner walls and worked towards a more artistic approach. Gothic cathedrals were also designed with statues and sculptures on them such as the gargoyle, which also served as a rainspout.

Romanesque cathedrals had few windows, as the walls of the cathedrals were very thick and made placement of windows extremely difficult. Contrary to Romanesque architecture, Gothic had many stained glass windows, which spread colored light, giving a feeling of peace. Gothic style used many flying buttresses and pointed arches, while Romanesque used rounded arches for added support to the heavy construction of the walls and ceilings.

Gothic architecture was achieved intentionally by the plan of Abbot Suger to rebuild St-Denis. ‘During the thirteenth century other French contributions influenced cathedrals and partially erased the twelfth century forms.’ (Grodecki, p. 73) The great models of the thirteenth century gave rise to formal continuity that can be seen more clearly throughout France than in other countries. France contains more structures that are easier read of successive stylistic phases. Champagne was the most readily influenced by the creation of Gothic architecture. The edifices of Champagne and Saint-Remis represent the final technical and formal improvements of Early Gothic architecture. The sixteenth century Parisian church of Saint-Eustache was modeled after the twelfth century Notre-Dame of Paris.

Though Notre-Dame of Paris is considered to be a negative influence by Grodecki, it was a model for many edifices of lesser dimension and importance in the diocese of Paris during the last third of the twelfth century. ‘The edifice being four stories tall lacks a triforium: in its place are rose shaped roundels that emit light up to the roof. The very large, well lit gallery opens to the central nave through triple arched openings.’ (Grodecki p. 62) Given the height of this structure, the builders turned to flying buttresses as a final solution. However, flying buttresses were not added to the choir. ‘The cathedral was built according to the “thin-wall” principle; the shallowness of the window recesses and of the gallery arcade make this thinness noticeable at every level.’ (Grodecki p.62)

A positive influence on Gothic architecture is Chartres Cathedral. ‘The Chartres type is believed not only to have served as a model for the great cathedrals both in and out of France, but also its formal and structural success is believed to have made it a kind of masterpiece sui generis whose historical value surely matches that of the most celebrated creations of world architecture. Gothic style is not to be found in the Chartres type, but instead in mid-thirteenth century art: namely Rayonnant style. The choirs of Paris cathedrals all share certain features that make the real culmination of the Gothic principles of space and construction.’ (Grodecki p. 107) The immensity and magnificence of Chartres is due to the facts that it was the seat of a very wealthy bishopric and the site of a well-known Marian pilgrimage. Chartres includes a double ambulatory with chapels, due to the combining of the plans of Notre-Dame at Paris and of Saint-Denis.

The transept is borrowed from the Cathedral of Laon. ‘Chartres architect’s genius and originality is shown in the interior elevation and general structure of the building. Chartres is three stories and resembles Sens with one difference: the arcade and clerestory are of equal height, separated by a triforium much like that of Laons. The design of the interior volumes, the delineations of bays by piers and colonettes, the rigor of the side aisles and ambulatory – these features comprise one of the most logical spatial arrangements known to Gothic architecture. (Grodecki, p. 110) The Cathedral of Chartres must be considered one of the monuments that states most explicitly the Scholastic or mystic purpose of medieval art. The influence of this extraordinary structure was immediate and widespread. Chartres prompted the elimination of the gallery during construction and the rejection of certain characteristic Champagne features. The twelfth century design of Notre-Dame had been superceded.

There are some discrepancies about when Gothic first came to England. According to L Grodecki, ‘the Gothic style was first introduced to England in 1174 by Guillaume de Sens in the choir of Canterbury Cathedral.’ (Grodecki, p. 195) While C Wilson believes that Gothic was introduced to England by way of ‘a series of more or less disconnected episodes, only some of which had important consequences.’ (Wilson, p. 72) Wilson also believes that ‘some of the churches which the Cistercians built in the north of England from about 1155 were Gothic.’ (Wilson, p. 73) So he is saying that these churches are the earliest examples of Gothic in the region, which counter claims Grodecki’s theory.

‘Unfortunately it is not at all clear which of the mid-12th-century Cistercian churches in the north of England served as the channel through which Gothic influences reached the region. What can be affirmed is that at least one northern Cistercian church must have been built in the Gothic style by the late 1150’s. The presence of the Burgundian elements at York virtually proves that the northern English Cistercians were the medium by which both the architect and the Gothic elements of his design were transmitted.’ (Wilson, p. 74) Avila, which is a parallel to York, is a mixture of Burgundian Cistercian Romanesque and French Gothic.

The society of the medieval time played an important role in the creation of these Gothic Cathedrals. ‘Every walk of life in medieval society can be seen
portrayed in the art and decoration of a medieval cathedral.’ (Brooke’s essay in Swaan’s GC, p. 13) The materials used in constructing these edifices were often gifts or offerings from the King, founders, patrons and craftsmen. Swaan seems to think that the peasants felt that the cathedrals were not meant for their presence except during construction when they offered their carts or labor for building. This would suffice to say that the contractors were of low class peasants. Cranes and pulleys powered by men and animals were used to haul stones. Cathedrals were expensive to build; the money came from gifts of land, farms, houses, and jewels. Many people believed that donating money would forgive their sins. The workers such as the architects, sculptors, blacksmiths, and many others, believed that being a part of the construction would bring them fame and fortune.

Cathedrals and the people inside implored that God is the most important part of a person’s life and should be thanked for everything. People offered prayers and offerings to God at the great Cathedrals thinking it would bring a prosperous and healthy life. At anytime were the townspeople feeling downhearted or prosperous for any reason, their first priority was to go to the center of town and thank God at the cathedral. Praising the Lord became a ritual of everyday life.

As one of the largest buildings of its time, the cathedrals represented the heavens in which people believed was peaceful and serene. France was the birthplace of the Gothic Style. French cathedrals began the Gothic era that spread throughout Europe in a rage that has never been seen since. English cathedrals combine the art of Romanesque and Gothic architecture. The cathedrals represented faith, dedication and cooperation. And showed the people that even if they had a miserable life, they could always turn to the comforting church for salvation. Cathedrals across the world come in many shapes and sizes but all have the same purpose, to serve as a place to praise Jesus. They will always be around to show the roots of Christianity and portray the architectural skills served by the people of the middle ages. 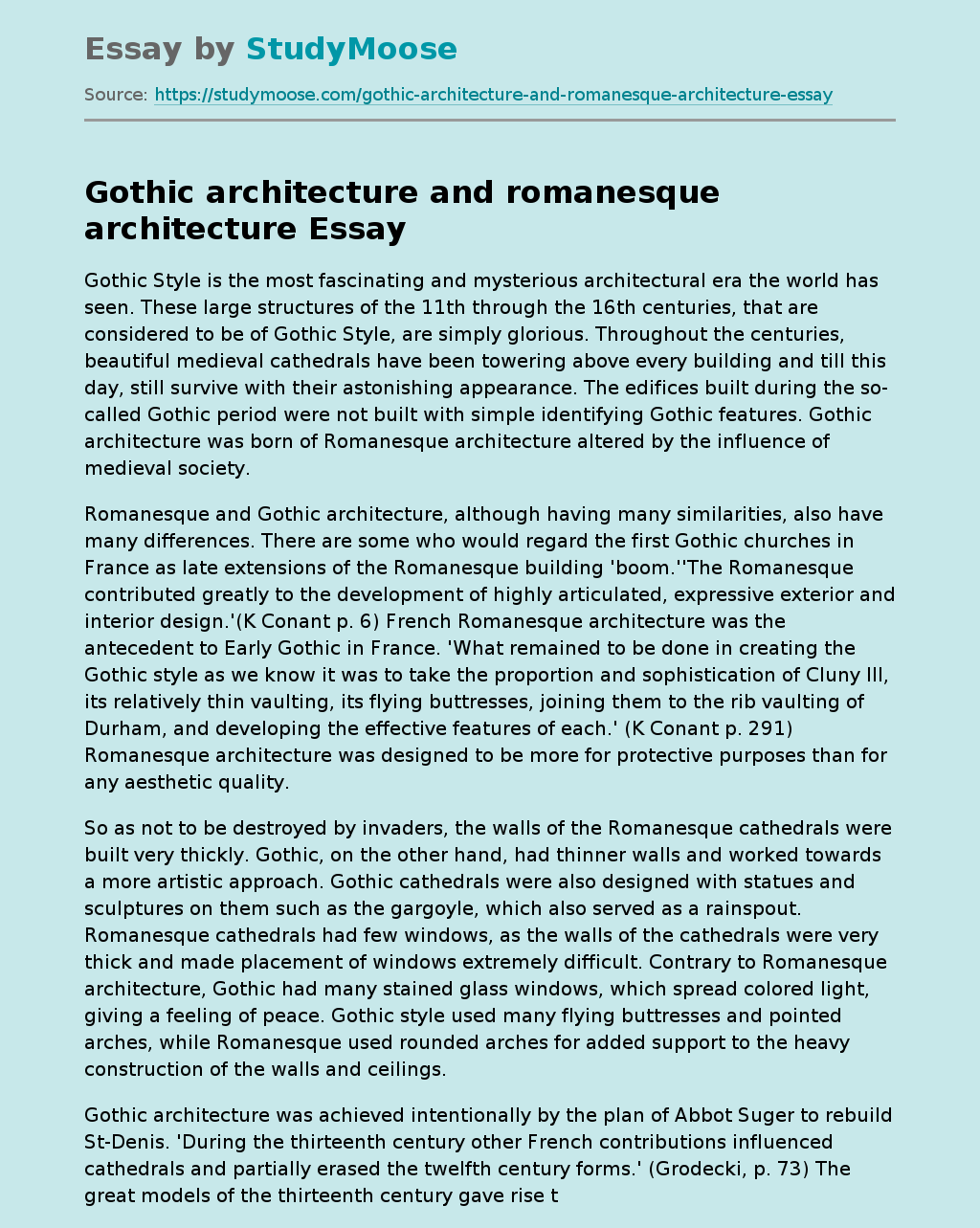