“‘Good health implies the achievement of a dynamic balance between individuals or groups and their environment.'” (Better Health Commission 1986, cited in Carey, D., Perraton, G.; Weston, K. 2000: 3). According to the World Health Organisation (WHO), ‘health’ can be defined as the absence of illnesses and a state of mental and social well-being (Carey et al. 2000:3). In other words, in order to maintain optimal health, it is imperative to have a well-balanced lifestyle which would include a nutritious diet as well as mental and social well-being.

Don't use plagiarized sources.
Get Your Custom Essay on Good Health Just from $13,9/Page

This essay shows that food is one of the many important factors amongst others when striving to maintain good health. This will be demonstrated by examining the three main aspects affecting an individual’s health, in the following order: diet, lifestyle and social fabric of family and society.

Diet is considered as one of the most crucial factors contributing to an individual’s health. However, being aware of what constitutes a good diet as opposed to a poor diet is significant in maintaining optimal health in an individual.

A diet that is well-balanced includes more fruit, vegetables, wholegrains and less fatty, salty or sugary foods. This would mean avoiding processed meals from takeaways and eating less refined foods. Several main reasons are commonly given for this. The first of this is a poor diet which has been noted to be a major cause of obesity. Obesity appears to be a major risk factor in many diseases such as colorectal cancer and coronary heart disease.

In addition, in recent years the number of diet-related diseases has increased proportionately, and is now one of the major causes of death in most western countries including Australia. According to the Australian Bureau of Statistics (1987 cited in Australian Consumers’ Association 1991: 6), the most significant causes of mortality in 1986 were cancer and heart disease. An explanation for this could be the steady rise in obesity levels within Australia, with many people eating highly processed foods which are laden with calories (Australian Consumers’ Association 1991: 13). It is therefore critical to eat a nutritively healthy diet, in order to successfully maintain good health and weight.

Furthermore, an example supporting the above contention is a study conducted by the Willcox team (2004: 2), which reveals that the Okinawans have one of the highest rates of longevity and have considerably lower risk towards most diet-related diseases which tend to be more prevalent in the ‘affluent countries’ of the West. The most notable difference in the lifestyle of the Okinawans and the Australians is their food consumption, which is low in calories and rich in fibrous foods such as grains, vegetables and soy. The study also states that such a diet has allowed the Okinawans to refrain from extensive free-radical damage to their body, allowing them to live longer and healthier. This reinforces the idea that nutriment consisting of a variety of wholesome meals rather than processed foods is extremely essential in maintaining health that has a lower predisposition to diseases associated with diet.

Another vital factor for maintaining optimal health is lifestyle. Grundy (n.d. cited in Cadzow 1996: 32) states that the continuing trend of deteriorating physical conditions is due to the sedentary lifestyles people tend to keep nowadays. It seems that in several modern cities like Australia, people often succumb to a physically inactive way of life because of the presence of numerous technological devices such as television for entertainment and elevators for convenience. For instance, it is quite common to find staff members in many workplaces choosing to send an e-mail to another office that could be just next door, then actually going down personally (Cadzow 1996:32). As a consequence, many people are not able to burn the amount of kilojoules they consume and are therefore rapidly gaining weight and becoming vulnerable to diet-related diseases, which can radically hinder their health.

Comparatively, the centenarians of Okinawa have been noted to keep a particularly active lifestyle, even as they grow older, frequently taking part in strenuous activities such as fishing and farming as evidenced by research conducted by the Willcox team (n.d. cited in King Murdoch 2005: 24). As a result of their late retirements and continuous physical activities, the Okinawans seem to enjoy high rates of longevity and good health as compared to the populations of other countries (Mc Devitt 1999: 59). A further critical element characteristic of a healthy lifestyle is to refrain from smoking and limiting alcohol intake to a minimum to enhance physical well-being (Melton 2001: 32). Hence, it is evident that staying healthy means keeping active. Various simple activities such as dancing, gardening, or brisk walking help to burn kilojoules whilst at the same time providing enjoyment. Such activities can easily be done by everyone to keep healthy.

Finally, social development also plays a fundamental role in promoting and maintaining good health. Perry (1997: 26) notes that the elderly that live with their children and grandchildren gain several positive impacts on their social and mental well-being. These benefits include emotional and physical support from their children along with a close-knit social network, both of which are significant to maintaining good social condition as evidenced by World Health Organisation’s definition of ‘health’. Conversely, the elderly are able to give emotional support to their family members, as well as recommend healthy dietary choices in order to encourage better health which provides mutual benefits to all members of the family, and allows for a dynamic state of wellbeing.

Another example highlighting the importance of culture in the maintenance of health is the Okinawan approach to life, which is full or enthusiasm and positive outlooks, which enables strong ‘social integration’. Further evidence in support of this contention includes studies conducted by several researchers in the West, which have revealed that easy going people with optimistic attitudes generally tend to outlive the pessimistic (Melton 2001: 32). In addition to keeping a positive outlook, coping with stress effectively is another important aspect in relation to mental condition. Meditation and spirituality, helps to reinforce the mental as well as social aspect of healthiness, thus increasing the ‘psychospiritual health’. It can therefore be summarised that being cheerful and engaging in social activities promotes better health.

In conclusion, it is evident that maintaining optimal health requires consideration of a variety of factors including the type of food consumed, the sort of lifestyle maintained and the existence of an interactive environment. Since all these factors affect the balance of an individual’s health, it is very difficult to say which particular one is more essential than another. Rather, it is the combination of all three dynamic features that enables the sustainment of a healthy life, without the incidence of diseases because health is a continual journey and the successful blend of physical, mental and social equilibrium is of utmost importance. As summarised by the Wilcox team, “[T]he issue is not how long we live, it is how well we live. 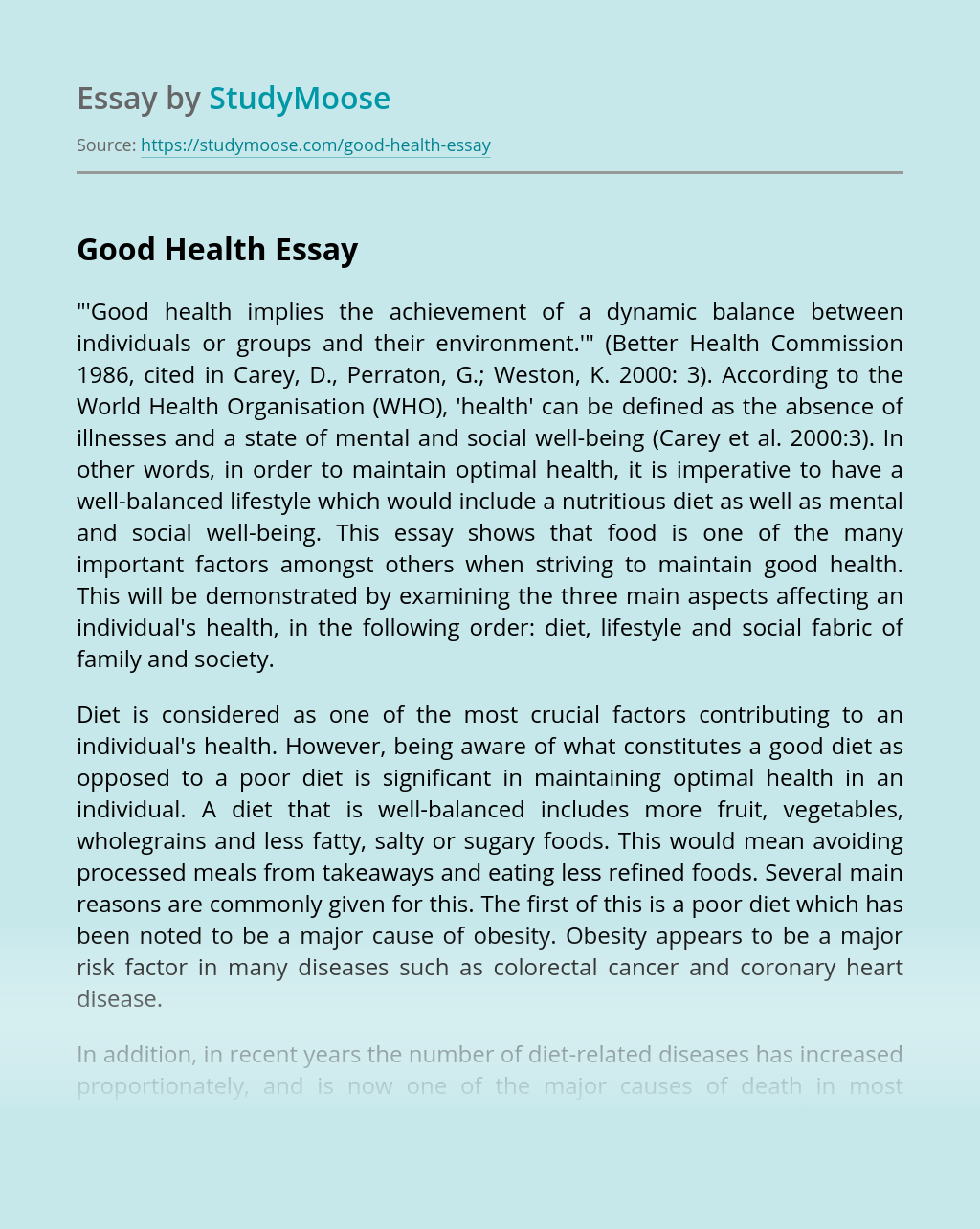 Rate this post “‘Good health implies the achievement of a dynamic balance between individuals or groups and their environment.'” (Better Health Commission 1986, cited in Carey, D., Perraton, G.; Weston, K. 2000: 3). According to the World Health Organisation (WHO), ‘health’ can be defined as the absence of illnesses and a state of mental and...

Get Essay
What is good health?

Rate this post The definition of health is ‘the state of being free from illness or injury’ (Definition of health, 2013). There are five main components of health including physical, mental, social, environmental and spiritual health. All of these five components have inter-relationships in one way or another and can both positively and negatively impact...

Rate this post Heath and wellness are key components in my life. To me, health is having no health issues such as, illness, sickness or injury. Wellness is a synonym of health, however I would define it as living a happy, healthy lifestyle with little or no health issues. I feel the importance of health...

Rate this post Smoking is an addiction that effects fourteen of every one hundred adults aged eighteen and older in the United States. This means that 40 million people are smoking everyday of their lives according to the center for disease control (CDC, 2017).Millions of Americans will live with a smoke related disease which can...