I want to talk about her relationship with Chris Brown, her album ‘A Girl Like Me’ and her album ‘Good Girl Gone Bad’.

Rihanna started to date Chris Brown, an American entertainer. On February 8, 2009, Rihanna and her boyfriend Chris Brown had an argument that twisted into physical abuse. Rihanna was injured severely with facial injuries. Chris Brown turned himself in to the Los Angeles Police Department in Wilshire.

On March 5, 2009, Chris Brown was charged with felony assault and because of making criminal threats. On June 22, 2009, he pleaded guilty and accepted to do community labor, five years probation and domestic violence counselling. He released a video online to apologize for what he had caused and is deeply saddened by it. He repeatedly apologized to Rihanna and accepts full responsibility for his actions.

Right after this commotion, Rihanna had her fourth album, Rated R, which was released in November 2009 and was expressed as a very dark and mature impression due to earlier events.

Her debut single, Russian Roulette, was a success. It is a mid-tempo pop song that contains famous R&B ballad characteristics. According to the lyrics, the song is about a violent romantic relationship that ended unexpectedly. That song received positive reviews about her vocal performance and the song lyrics. Her third global single, Rude Boy, was released and recognized as the biggest worldwide success from the whole album. The song is about a girl who is getting attention from the guys, and they want her. They are probably just teasing her and cat-calling her, but Rihanna is much more like ‘show me what you got’. It’s about a woman’s sexual freedom.

Rihanna’s second album, A Girl Like Me, which was released in April 2006. It sold 115,000 copies in its first week and was certified Platinum. It alternates between the sunny dancehall/pop, hip-hop, club, adult music. The songs in this album were hardly about getting back at a guy or having an intercourse. Her songs were simply songs just to dance to, about someone losing her trust, love and compassion. Her lead single in that album, SOS, was number one on the Billboard Hot 100. It was her first single to top the charts of United States. Her second single, Unfaithful, was a major worldwide hit. Songs like these were what everyone used to listen to, and not only people who have had an abusive relationship, or had their heart broken.

Rihanna’s third studio album Good Girl Gone Bad was released in 2007. She wanted to start in a fresh track with the help of some music producers. She changed her image then to a more rebellious image. She dyed her hair black and cut it short. “We figured Good Girl Gone Bad was the perfect title because it showed people I’m my own person now. Not doing what anyone wants me to do. I’m not the innocent Rihanna anymore. I’m taking a lot more risks and chances. I felt when I cut my hair, it shows people Im not trying to look or be anybody else”, Rihanna tells MTV News. During an interview on UK radio station, Capital FM, Rihanna explained the meaning and reasoning behind the album title: “Bad is not sleazy. Bad has its own term to every individual and in my case it just means I’ve gotten a little rebellious on the album, broken out of my shell and I’m taking risks… Michael Jackson Bad kind of way”. 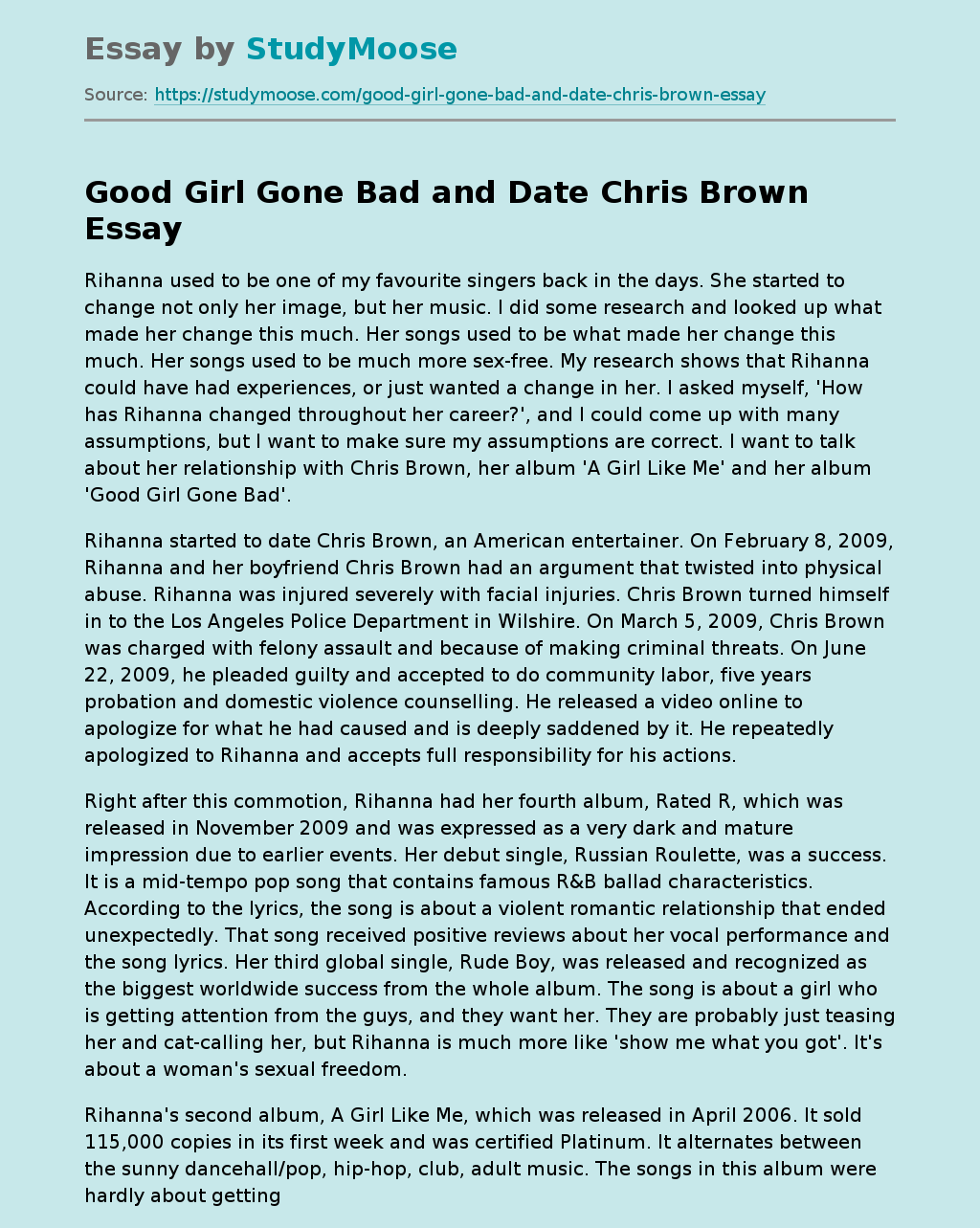