The 13th century Golconda Fort was built by the Kakatiya kings. In the 16th century, Golkonda was the capital and fortress city of the Qutb Shahi kingdom, near Hyderabad. The city was home to one of the most powerful Muslim sultanates in the region and was the center of a flourishing diamond trade.

Golkonda was located 11 km west of the city of Hyderabad. According to a legend, the fort derives its name from Golla Konda, which is a Telugu word for Shepherd’s Hill.

It is believed that a shepherdboy came across an idol on the hill. This led to the construction of a mud fort by the then Kakatiya dynasty ruler of the kingdom around the site.

The city and fortress are built on a granite hill that is 120 meters (400 ft) high and is surrounded by massive crenelated ramparts. The beginnings of the fort date to 1143, when the Hindu Kakatiya dynasty ruled the area. The Kakatiya dynasty were followed by the state ofWarangal, which was later conquered by the Islamic Bahmani Sultanat.

The fort became the capital of a major province in the Sultanate and after its collapse the capital of the Qutb Shahi kings. The fort finally fell into ruins after a siege and its fall to Mughal emperor Aurangazeb.

After the collapse of the Bahmani Sultanat, Golkonda rose to prominence as the seat of the Qutb Shahi dynasty around 1507. Over a period of 62 years the mud fort was expanded by the first three Qutb Shahi kings into a massive fort of granite, extending around 5 km incircumference.

It remained the capital of the Qutb Shahi dynasty until 1590 when the capital was shifted to Hyderabad. The Qutb Shahis expanded the fort, whose 7 km outer wall enclosed the city. The state became a focal point for Shia Islam in India, for instance in the 17th century Bahraini clerics, Sheikh Ja`far bin Kamal al-Din and Sheikh Salih Al-Karzakani both emigrated to Golkonda.[4]

The Qutb Shahi sultanate lasted until its conquest by Mughal emperor Aurangzeb in 1687. The fortress held out against Aurangzeb for nine months, falling to the Mughals through treachery.

Kancharla Gopanna, popularly known as Bhaktha Ramadaasu, a devout Hindu who constructed Bhadrachalm temple without informing the sultan at that time Tana Shah, was kept in a jail located inside the fort.

Golkonda consists of four distinct forts with a 10 km long outer wall with 87 semicircular bastions (some still mounted with cannons), eight gateways, and four drawbridges, with a number of royal apartments & halls, temples, mosques, magazines, stables, etc. inside. The lowest of these is the outermost enclosure into which we enter by the “Fateh Darwaza” studded with giant iron spikes near the south-eastern corner. At Fateh Darwaza can be experienced a fantastic acoustic effect, characteristic of he engineering marvels at Golkonda.

A hand clap at a certain point below the dome at the entrance reverberates and can be heard clearly at the ‘Bala Hisar’ pavilion, the highest point almost a kilometre away. This worked as a warning note to the royals in case of an attack. The whole of the Golconda Fort complex and its surrounding spreads across 11 km of total area, and discovering its every nook is an arduous task. A visit to the fort reveals the architectural beauty in many of the pavilions, gates, entrances and domes.

Divided into four district forts, the architectural valour still gleams in each of the apartments, halls, temples, mosques, and even stables. The graceful gardens of the fort may have lost their fragrance, for which they were known 400 years ago Bala Hissar Gate is the main entrance to the fort located on the eastern side. It has a pointed arch bordered by rows of scroll work. The spandrels have yalis and decorated roundels. The area above the door has peacocks with ornate tails flanking an ornamental arched niche. The granite block lintel below has sculpted yalis flanking a disc.

The design of peacocks and lions is a blend of Hindu – Muslim architecture. Toli Masjid, situated at Karwan, about 2 km from the Golkonda fort, was built in 1671 by Mir Musa Khan Mahaldar, royal architect of Abdullah Qutb Shah. The facade consists of five arches, each with lotus medallions in the spandrels. The central arch is slightly wider and more ornate. The mosque inside is divided into two halls, a transverse outer hall and an inner hall entered through triple arches. Much thought went in to building this gate. A few feet in front of the gate is a large wall.

This prevented elephants and soldiers (during enemy attacks) from having a proper ramp to run and break the gate. The fort of Golconda is known for its magical acoustic system. The highest point of the fort is the “Bala Hissar”, which is located a kilometer away. The palaces, factories, water supply system and the famous “Rahban” cannon, within the fort are some of the major attractions. It is believed that there is a secret underground tunnel that leads from the “Durbar Hall” and ends in one of the palaces at the foot of the hill.

The fort also contains the tombs of the Qutub Shahi kings. These tombs have Islamic architecture and are located about 1 km north of the outer wall of Golconda. They are encircled by beautiful gardens and numerous exquisitely carved stones. It is also believed that there was a secret tunnel to Charminar. The two individual pavilions on the outer side of Golconda are also major attractions of the fort. It is built on a point which is quite rocky. The “Kala Mandir” is also located in the fort.

It can be seen from the king’s durbar (king’s court) which was on top of the Golconda Fort. The wonderful acoustic system of Golconda fort speaks volumes about the architecture of the fort. This majestic structure has beautiful palaces and an ingenious water supply system. Sadly, the unique architecture of the fort is now losing its charm. The ventilation of the fort is absolutely fabulous having exotic designs. They were so intricately designed that cool breeze could reach the interiors of the fort, providing a respite from the heat of summer. 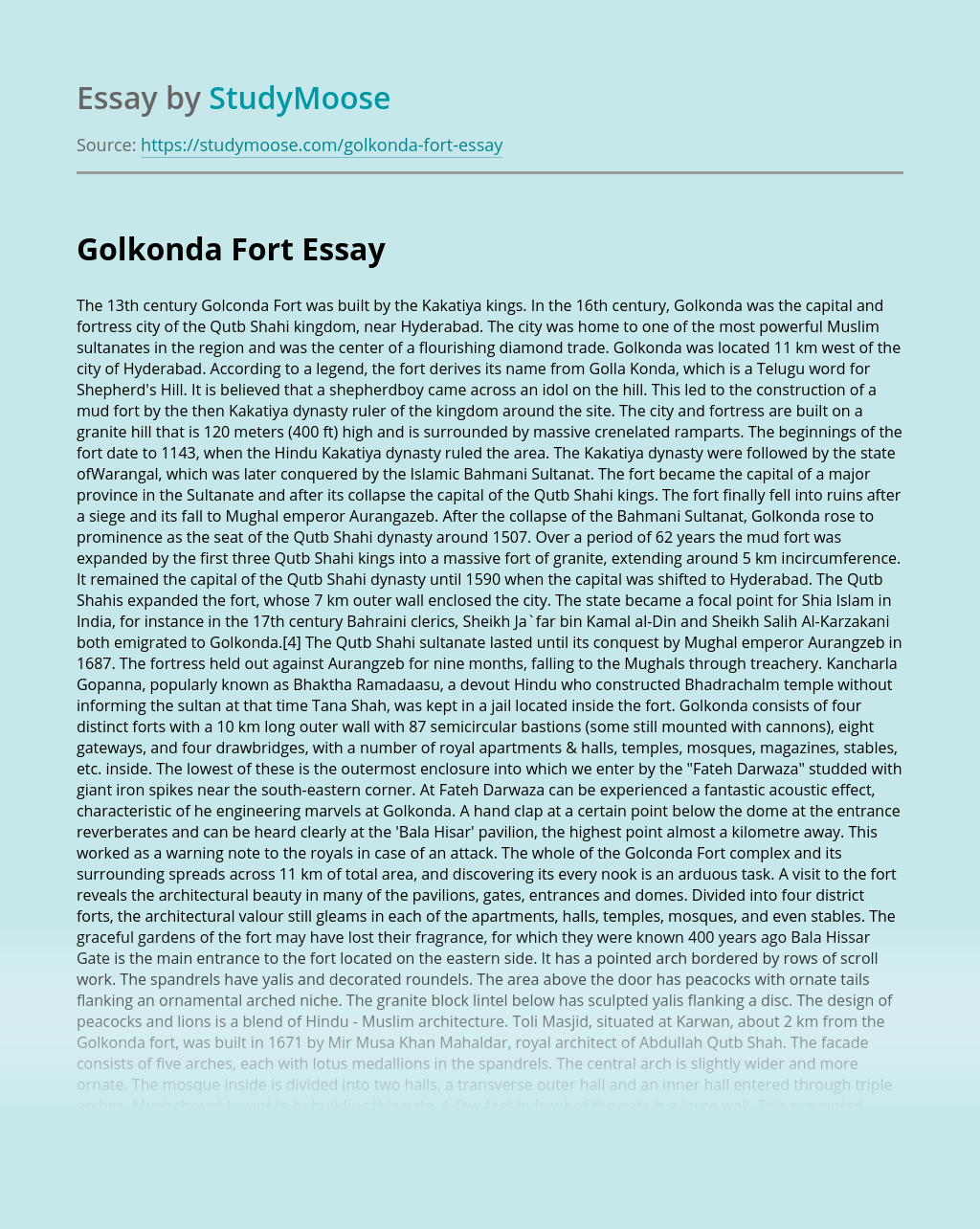