God gives life and only God can take it away

I neither agree nor disagree with this statement, for I believe that it has relevance in only certain circumstances.

I can understand why many Christians would think this statement as true as many biblical passages show this. I also think that it is a fundamental belief of Christianity to believe that, “God gave life”. There are many passages in the Bible that say this, like in Genesis 1: 27, 28 and Genesis 2: 7:

“So god created man in his own image, in the image of god he created him; male and female he created them.

Don't use plagiarized sources. Get your custom essay on
“ God gives life and only God can take it away ”
Get custom paper
NEW! smart matching with writer

And God said to them, “”have dominion over every living thing that moves upon the earth.””

“Then the Lord God formed man from the dust of the ground, and breathed into his nostrils the breath of life; and the man became a living being”

Some Christian churches do believe that only, God has the right to take life away. They may think that under very special circumstances it is allowed to take away life, to permit abortion.

All Christians believe that life is sacred and every attempt should be made to try and protect it. However some Christian denominations (except The Roman Catholic Church) agree that within certain circumstances it is all right to abort (or terminate) the foetus.

I agree with abortion being carried out, but only within certain, very serious circumstances. I think that the worst possible way in which abortion can be used is when it is used as a form of contraception. If this is done repeatedly it can destroy the possibility of ever having children in the future and moreover would be risking the life of the woman.

I also disagree with the concept of abortion, because even though I am not Christian I regard life as a very important, probably the most important gift that God can give to human beings.

I believe that abortions should only be carried out only before the first 25 weeks. Unless there is severe deformity that is detected or that the mother’s life is in danger. Beyond this time the foetus is said to feel pain and certain other emotions. An abortion beyond this time, I believe is immoral and should be avoided. The argument against the set amount of time allowed for an abortion would be “when does life begin?” This is because we define life as “the period between birth and death”. Some people see birth as beginning at the actual birth (when the baby is born), and take the literal approach but other people (especially the Roman Catholic Church) see birth, as beginning from the very moment of conception.

I agree with the law that states that an abortion can be offered to the pregnant woman at any stage if the pregnant woman’s life is at risk because I believe that the child would be deprived of a mother’s love and affection and the mother would not be able to care for her baby.

If for whatever reason the parents of the foetus refuse to have an abortion and do not want their child, then another option left would be adoption. Adoption gives other people who cannot have children a chance to be parents. This way no one is hurt and the baby still get a chance at life and to make a contribution to the human race. However this may not always be the answer because many of the children who are put up for adoption may have to live, with foster parents or in orphanages.

Another reason where I think abortion is acceptable is when it is known beforehand that the foetus is seriously deformed and will be born severely handicapped. When the Roman Catholic Church puts forward the argument that everyone should be appreciated and respected no matter what their deformity, the quality of life becomes a strong counter argument. I think that in this case the quality of life has priority over life itself. I think that it would be a lesser sin to abort the foetus than to let it live with terrible disability for the rest of its life. Other Christian churches, like the Methodists and the Baptists take this view.

I think that abortion is a very thought provoking and controversial issue where there is no right or wrong, and where both sides raise significant arguments. It is an issue that concerns not only Christians but also all people worldwide. I personally, think that the person who should have the greatest say in such a situation is the pregnant woman. She is the person that would be affected the most either way and should have the choice of an abortion, should she want one. She should also not be forced to have an abortion against her will and should not be refused an abortion if she asks for it. I think that abortion should not be misused or used for the wrong reasons as this shows complete disregard for human life and could be interpreted by some, as equivalent to murder.

God gives life and only God can take it away. (2020, Jun 02). Retrieved from https://studymoose.com/god-gives-life-god-can-take-away-new-essay 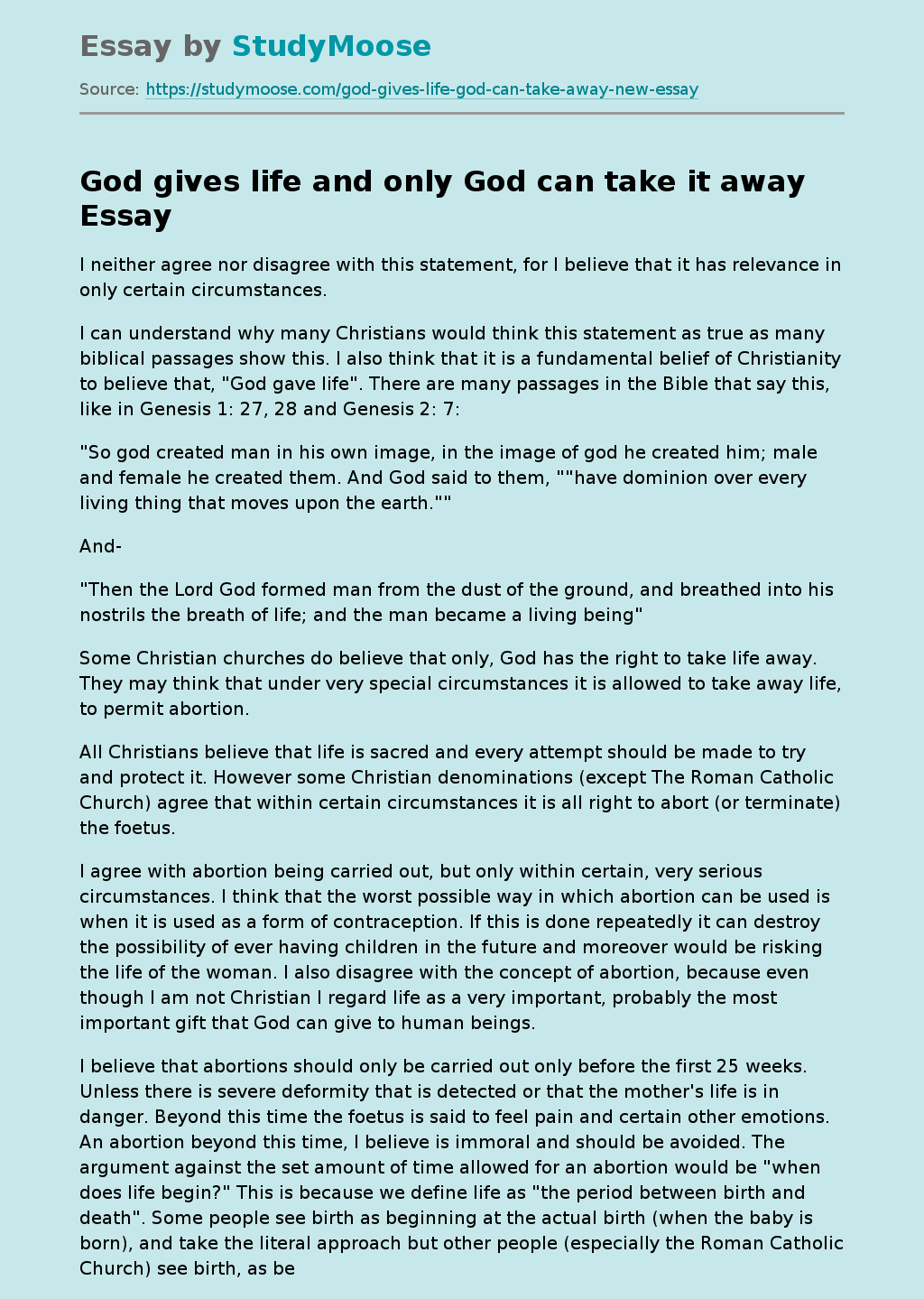