GMO Food is not Dangerous to People

The huge question that modern civilization now faces is if we even have the ability to sustain our rapidly growing population. If my peers think the United States may be crowded, I would tell them to spend a day in Delhi on the Indian subcontinent, or perhaps in the city Jakarta, located in Indonesia, with a population of just over 13 million people. Here is the problem: we need food, and not crop failures. Crops susceptible to even the weakest pests and diseases pose a risk to the ever flowing fields of crop which sustain the world’s population.

Don't use plagiarized sources. Get your custom essay on
“ GMO Food is not Dangerous to People ”
Get custom paper
NEW! smart matching with writer

If farmers stopped producing for a year, or just had a bad harvest, food prices would skyrocket, and people, ultimately, would have to sacrifice necessities in order to feed their families. People may see genetically modified crops as freaky and plain-out weird, but it is the future, despite what disadvantages it could provide. While modern biotechnology may come across to civilization as risky and unnatural, the benefits it brings to people far outweigh any of the risks it presents.

Genetically Modified Organisms (GMOs) are mainly meat and edible plants that have been modified genetically through genetic engineering. The truth is, is that since civilization has faced the test of time, people have found a new way to survive other than by constantly hunting and gathering: it is through farming that massive communities (and eventually, organized nations) have been built, and the Neolithic Age is when it all started. People farmed basic crops, such as barley and beans, and naturally, farmers would choose to breed together the biggest crop that they produced out of a harvest.

In a similar fashion, those humans that domesticated animals would breed together the cows that produced the most milk, or the sheep that produced the most wool, or perhaps pigs that were larger and produced more meat. This proves to us that in farming, humans have utilized their minds to fulfill their obligations to their family (to produce enough for them to eat) as well as personal motivations (to perhaps sell that very crop and provide) for profit. While GMOs is the result of an emerging biotechnology (one that we are still developing today), the process that I have described above is called “selective breeding,” and it is what humans have used to breed their animals or crops for thousands of years. The ancient process of selective breeding is what led to the more direct, contemporary technology of GMOs – and it is life-changing, because this technology is one of the main reasons why humankind has been able to sustain the population explosion of the 21st century.

The purpose of the modern biotechnology is to genetically modify conventional crop with certain traits that would normally take generations upon generations of breeding to induce. It is, essentially, a quickened process of evolution, because scientists are able to take, put in, and suppress certain genes within crops to, for example, make them less susceptible to disease. With a certain genetically modified crop being less susceptible to disease (and therefore crop failure), it has more of a chance to flourish. While this would not mean much to the continent of Europe (a continent that has farmers that already provide their market with a steady source of crop), the continent of Africa would be drastically changed, because many of its inhabitants are farmers that lack the technology and perfect climate for the most efficient crop growth – in other words, genetically modified crops could effectively change the way how they live, as more people are free to explore other occupations instead of farming their entire lives. (Paarlberg) This alters the country’s host economy, the varied occupations of its citizens, and more importantly, if the host country has a shortage of food. In short, the invention of Genetically Modified Crops are a subtle but world-altering technology.

While GMOs might affect mankind in a positive way, what about the planet that we live on? While people might want to decide for themselves if there is an environmental impact caused by this technology, committees from the scientific realm typically say there is “no cause-and-effect evidence of environmental problems” from GMOs. (Kiplinger) Like what was stated earlier: genetically modifying a crop to have a specific trait is simply a quickened process of evolution – for example, if a farmer was breeding two large corn stalks to produce an even larger stalk through selective breeding, taking away the gene that limits the stalk’s height in the first place would save generations upon generations of time for the farmer. After reviewing 900 research publications about GMOs, scientists had to come to the eventual conclusion that “genetically modified crops are just crops”. (Kiplinger) Many believe this concludes the myth that genetically engineered crops are not as safe as crops grown conventionally, and furthermore, takes away the fear out of the argument of food safety, both for humankind and the environment.

In terms of GMOs relating to sustainable chemistry, there are organizations such as ‘Green America’ that discourage the usage of modern biotechnology such as the implementation of GMOs in the world’s crops. They argue that the agroecology is the answer to sustainably produce the food civilization will need to survive. Agroecology is essentially the study, design and management of sustainable agroecosystems – for example, finding more efficient ways to rebuild soil health and biodiversity, etc. While there are very few government regulations for GMOs, there are positive scientific contributions that agroecology has made in Latin America as well as the Caribbean, maximising their economical gains while promoting sustainability and increasing food production in their agroecosystems. (Agrarias)

Overall, while modern biotechnology may come across to civilization as risky and unnatural, the benefits it brings to people far outweigh any of the risks it presents. Within these scientific studies, I discovered that GMOs aren’t any different from conventional crops, it’s just that they are evolutionarily sped-up. GMOs seem to prepare civilization for the problems it will face with the exponential growth of humankind on planet Earth, and as far as scientific study can grasp, it does not pose a cause and effect danger to the environment, which cause many to believe it will not harm, but help the future of humanity.

GMO Food is not Dangerous to People. (2021, Feb 03). Retrieved from https://studymoose.com/gmo-food-is-not-dangerous-to-people-essay 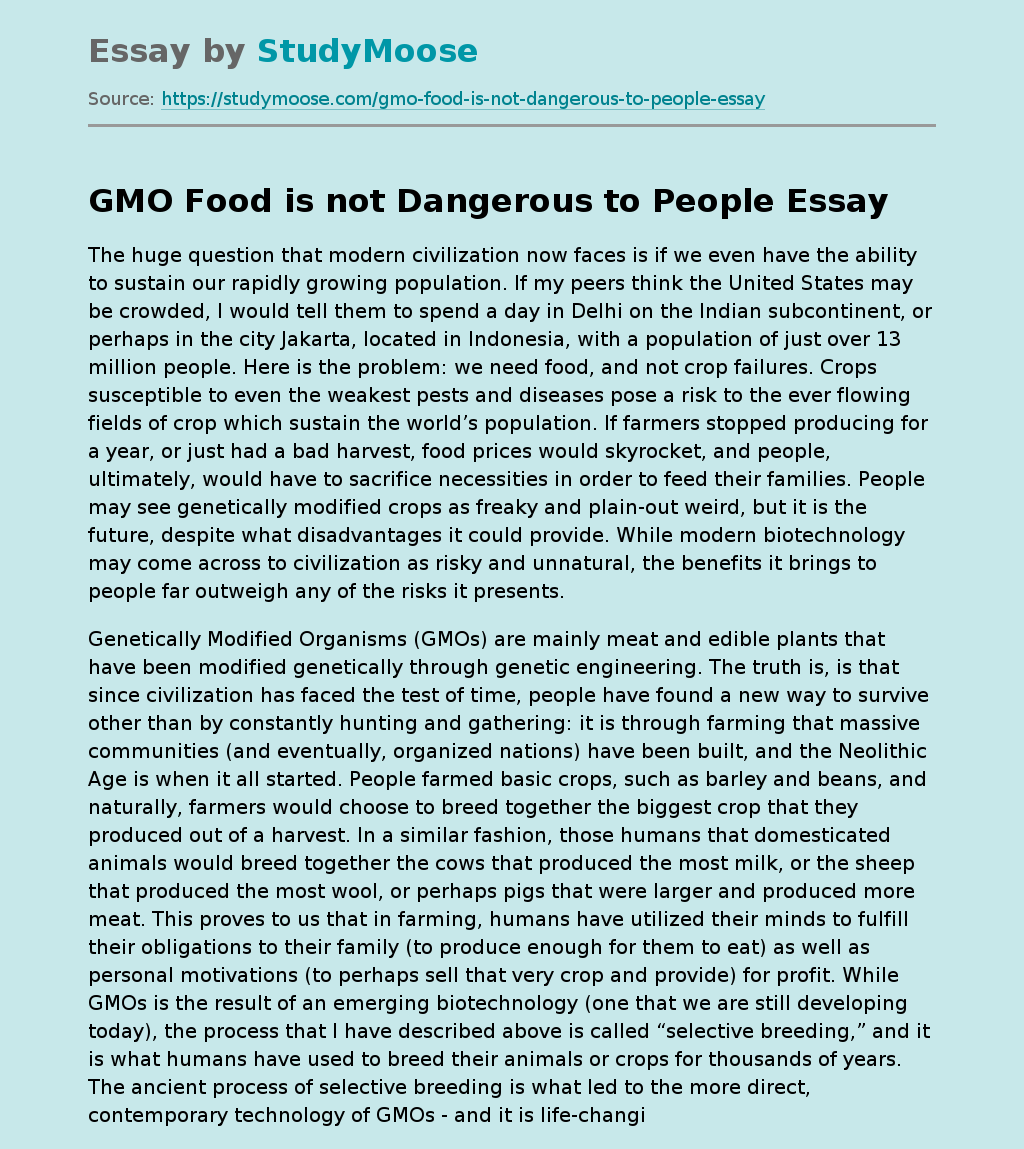