The main debates goes in a sense that if something is part of a basic need then why is it not free? We all need maize and wheat in our diets.

What is genetic engineering? It is any direct manipulation of an organism’s genes.

Advantages and Disadvantages of Genetic Engineered Grains in Terms of

The environment: Pesticides have been through countless studies and all resulted with negative effects on the environment. Before this whole idea was implanted, pesticides which includes insecticides and herbicides were used to control weeds, insect infestation and diseases.

This might seem like a great chemical to use but reality is, it caused more damages to the environment than good. They pollute air, water and soil. They can also be carried by wind and contaminate other areas as well, contribute to the disappearance of pollinators, threaten fish, and destroy bird and animal habitats. Now with the technology of genetic engineering this can be reduced significantly, it allows pesticides to be reduced as the grains are produced in a manner where they are resilient to pest.

With that less harm is done to the environment. GMO’s have also helped reduced greenhouse gas emissions.

Human health: Genetically engineered grains have a larger vitamin and mineral than non-genetically engineered grains which have many functions in our bodies, a few being they help support bones, heal wounds, and boost your immune system. They also convert food into energy, and repair cellular damage. This technology has also decreased the million cases of pesticide poisoning.

The economy: Genetic engineering has resulted into larger yields being produced by farmers. Larger yields equal to higher incomes and more products/foods that can be exported which positively affects the country.

Environment: The whole first aim of these genetically engineered crops was to reduce the use of pesticides which were said to be harmful to the environment. Now think about this, living organisms are created in such a way that they adapt to situations. It’s the same thing as when doctors prescribe you with medication they told you not to exceed several days consuming them. Otherwise your body gets used to them and instead of fighting with your immune system they do nothing. Same goes with these genetic grains yes for the few months or even years but as time goes by, the weeds for example will become used to these chemicals and the use of herbicides will increase which is very much harmful to the environment.

Human health: Research has been conducted and there is a possibility that these GMO foods can trigger allergic reactions to certain people due to the chemicals in these products. There is worry that genetic modification, which can boost a crop’s resistance to disease or make it more tolerant to herbicides, could affect the ability of people to defend against illness, things such as antibiotics. This is because antibiotic-resistant marker genes are inserted with GM material.

Economy: Nothing is for free. There are always costs involved in everything. South Africa is a currently financially struggling country. These genetic engineering foods are costly and the labour they come with is not free. It costs thousands and thousands.

We do not know where this is leading or how it might affect the world in the next 20 years. Firstly, genetic engineering interferes with nature, it interferes with how things should be. Things are the way they are for a reason. Why interfere with it, Yes, we might see the benefits now but what if they are temporary benefits? These products can affect us health wise. As well as genetically modifying an organism is manipulating its genes which can change the whole crop. If for instance you as a person are inserted with your brothers’ genes, you change as whole, you are just not the same. Same goes with these modified organisms. But another aspect is that if something that can help with the production of food and as a country we can benefit through exportations.

After conducting this research and understanding the basis of this whole research. I have come to these following conclusions.

We are living in an improving world and it is okay to move with time. Genetic engineering, I believe stated ages ago. When our forefathers were still alive. It was not as advanced as it is now.

Before conducting this research, I never thought of the roots of this whole process. All I knew was what I saw in stores, waiting to be bought. As time progressed I realized this may be deeper than it seems. I realized there are as much benefits as they are detriments, even if they appear to be undercover or low key. Thinking back to 10 years from now the mealie meal we had at home does not taste the same as the one we have now. Due to the progress in agriculture.

There are many ethical issues in relation to this topic and the one main one that stands out is that when something is genetically modified or genetically engineered it can almost be equivalent to the change of the organism.

My grandmother personally is a ‘’farmer’’ at home. Well she has her own garden at home and I used to see her disappointed when all her corn became infected which resulted to a loss of corn. This technology helps with such scenarios when the crop has been infected with a disease.

The first time at the beginning of my research when I searched articles and websites looking for meaning of this whole thing I realized my point of view was wrong. The first thing I thought was why this would be legalized but from my sources I started gaining knowledge and understanding why something like this is being done.

We were informed about the project quite a while ago but immediately when I touched my hands on the papers the first thing I did was ask my father about how he feels about genetic engineering since he is in agriculture, surely he deals with such things. (bear in mind I did not even know what genetic engineering is) He then told me how it works, and the way things operate. My knowledge then increased a little bit. I then went to our community library to see if perhaps it can help me with anything turns out it did not help me with anything. I finally decided to put the internet into use. I googled what genetic engineering was, what it is used for and how it is used. I went into the action bioscience webpage, they usually base their page on such things. It was quite helpful as I actually understand what is going on. I decided to search up other webpages as well.

I then started my project, the start of writing the actual project. I looked up related articles. Where I was looking for the benefits of genetic engineering, how it was and how it is now. I watched YouTube videos where scientists were interviewed, as to how they think this whole thing works. The advantages and disadvantages as well. How it impacts us as humans as well as our environment and finally economy. I watched several videos as well as how the actual process is conducted, of which I gained a lot of knowledge. The majority help that I received were from the different webpages as they contained a variety of information which gave me the advantage of looking at things from both perspectives. The advantages and disadvantages around the whole idea. I then interviewed my school class mates, the ones who do life science. Asking them how they feel about the whole thing and whether they view it ethical or not. Majority found it ethical of which I asked them more follow up questions. I also asked my grandmother who has a garden at home, I asked her how she feels about the whole process and how she has been affected by pests. And if she’s okay with the whole idea of everything. 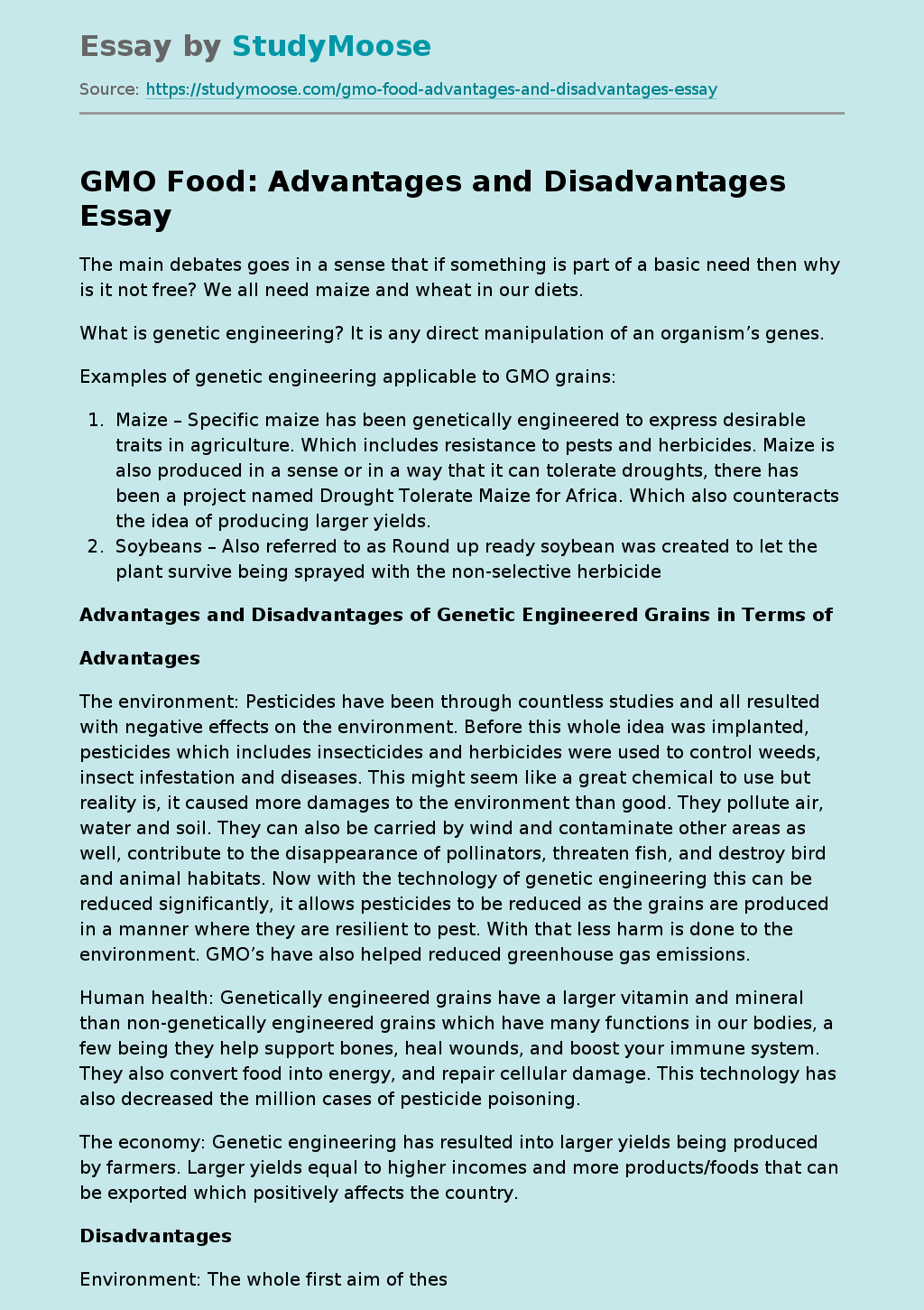