Glory is both an awe inspiring and heart wrenching movie about the first all black volunteer company to fight in the civil war. The movie starts off with Col. Robert Gould Shaw leading a company of soldiers in Antietam which suffers heavy losses. Soon he is promoted to Colonel and given command to the 54th Massachusetts volunteer infantry; the first all black regiment. The first volunteer to sign up is an educated black man named Thomas Searles who is also Shaws friend.

Don't use plagiarized sources. Get your custom essay on
“ Glory Movie ”
Get custom paper
NEW! smart matching with writer

Many more men join the regiment including an escaped slave named Trip, a free black man named Jupiter Sharts, as well as the gravedigger Rawlins. After realizing the regiment in never going to be more than anything but manual labor, Colonel Shaw confronts his superiors and demands to be transferred to somewhere where they will see some fighting or else he will report him to the War Department for suspicious business. Shaws request is granted and is transferred to South Carolina where they successfully fight off a group of confederates.

This movie was a huge hit. Released in 1989, it won a total of 16 awards including 3 Oscars and god nominated for 12 more awards. The Director Edward is well-known for his heroic movies that include Glory (1989), and the breathtaking works of art that include Legends of the Fall (1994) as well as modern hits such as Love and other Drugs (2010) and Defiance (20080. Zwick has also been known for his thoughtfulness as a director, and for his record of working with television series and other films as a producer.

The movie itself was destined for greatness with huge Hollywood names such as Denzel Washington who played Trip and Morgan Freeman who played John Rawlins also great supporting actors like Matthew Broderick who played Colonel Shaw and Andre Braugher to play Thomas Searles. The movie budget was 18,000,000 and grossed a total of 26,830,000.

In my own rating system 5 being the best and 1 being the lowest the movie got a 4. The movie deserved every award it got. There were amazing battle scenes as well as some very emotional scenes as well. Denzel Washington was an amazing actor, the scene where he was getting whipped for deserting (which we later find out was to find shoes) while the colonel was watching was one of the most heart wrenching scenes in the movie. As well as great acting the story never skips a beat. There’s never a dull moment. The movie had a clear plot and you could easily understand why something was happening. The movie gave a realistic view of how hard things were for African Americans were and their hunger to fight for what they believe is right.

The historical accuracy of Glory is pretty questionable. It does a good job addressing the hardships and discrimination the 54th did go through. However like all Hollywood history movies it does have its rights and wrongs. Most of the volunteers in the movie were depicted as fugitive slaves when in reality they were free men in Massachusetts. Of the major characters in the movie’s version of the regiment, only Robert Gould Shaw was a real person. The rest are made up characters. The name of Shaw’s executive officer (Cabot Forbes) is a combination of the first name from one of the real Shaw’s friends and the last name of another. Colonel Shaw was a married man yet in the movie it wasn’t shown.

Though it may not have been a big point in history it was a big part of Colonel Shaw’s personal life. At the end of the movie it states that “over half” of the regiment was lost during the assault on Fort Wagner. However, official records state that the 54th sustained 272 casualties, which is closer to 40%. Of these casualties, only 116 were fatalities, just under one fifth of the men to storm the fort, however if you include the 156 that were captured it would bring your total to over half. Most aspects of the movie however are true. When the black soldiers refused pay due to discrimination Colonel Shaw did refuse his pay as well.

Against all expectations the 54th rose above that and proved them wrong. They proved their valor and honor throughout several battles during the war. There was a memorial made to Colonel Shaw and his 54th and thus solidifying their regiment as one of the most influential and memorable of all time. 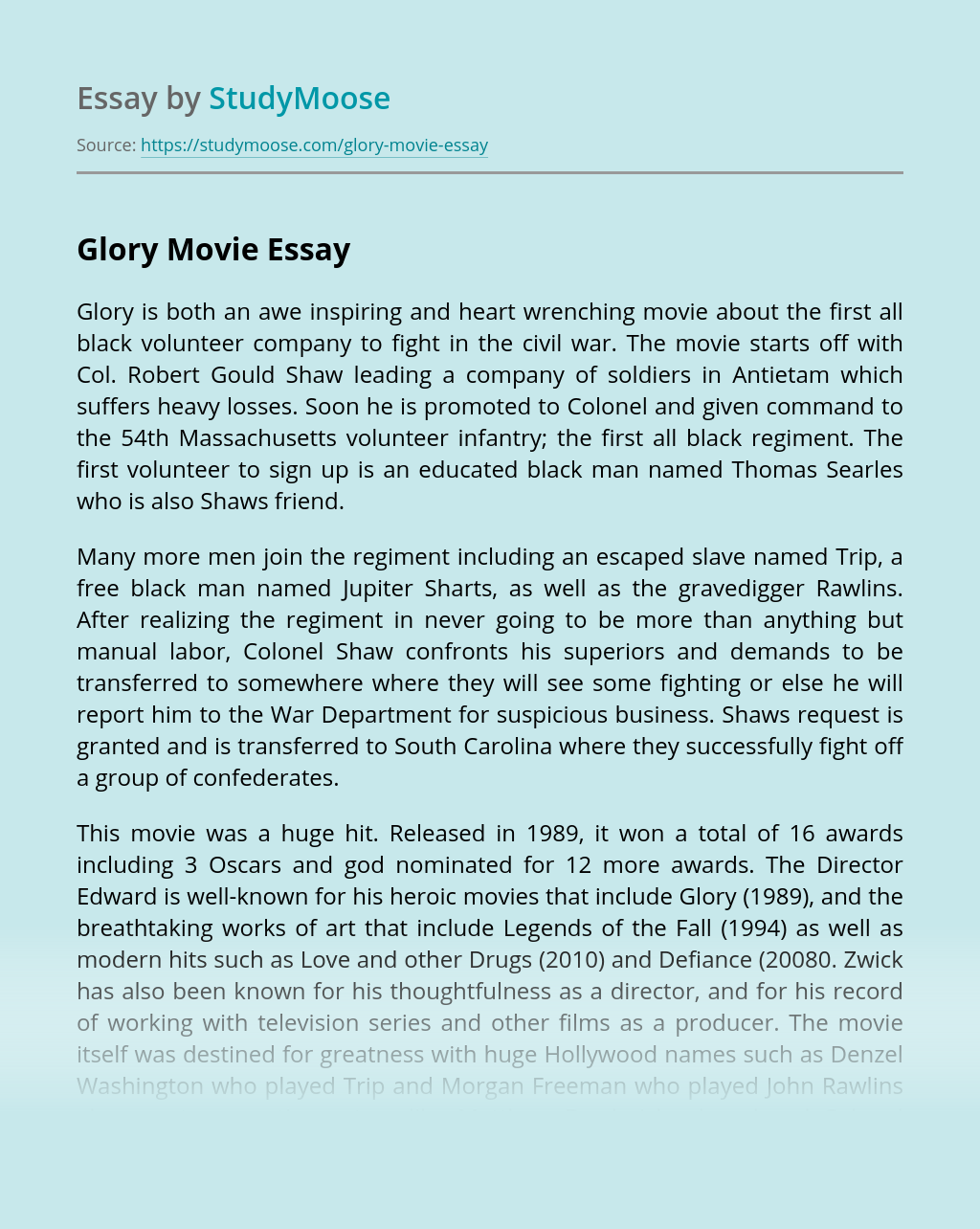