“Globalisation is a good thing” to what extent do you agree with this statement?

Globalisation is the growth to a global or worldwide scale. It is the increase of trade around the world, especially by large companies producing and trading goods in many different countries. When available goods and services, or social and cultural influences, gradually become similar in all parts of the world.

Examples of globalisation are Companies such as Toyota, a Japanese company that has become globalised and is now a worldwide company.

Don't use plagiarized sources. Get your custom essay on
“ “Globalisation is a good thing” to what extent do you agree with this statement? ”
Get custom paper
NEW! smart matching with writer

Another example is Nike which was originated in Beaverton, Oregon, United States and is now a worldwide company.

MEDC’s and LEDC’s are linked through trade. The poorer countries produce and import products and merchandise to MEDC’s at a very low salary. Primark is an example of trading with other countries for unfair prices. From the clothes being made and brought many different countries have been involved Many other clothes companies to this as well. This is known as world trade system and can often be described as unfair for some.

China is located in Eastern Asia, bordering the East China Sea, Korea Bay, Yellow Sea, and South China Sea, between North Korea and Vietnam, in the Northern hemisphere. China’s climate is Humid, sticky, dry and hot. Some major crops that are grown in China are rice, wheat, corn, soybeans and tuber crops. China has an extremely high population, just over 1.3 billion people with a birth rate of 12.17 births/1000. Its capital city is Beijing. One of it’s most famous landmarks is the great wall of chine, which is one of the seven wonders of the world. In recent years China has changed and developed rapidly especially economically.

It is now the fourth largest economy in the world. A lot of Asian countries are now known as “newly industrialising countries”. This means that a country whose level of economic development ranks it somewhere between the developing and first-world classifications. These countries have moved away from an agriculture-based economy and into a more industrialized, urban economy, with higher and more technology.

Globalisation is a good thing for china as it helps bring in higher profits as the products are kept extremely low as they do not need to pay people a high salary to make them. TNC’s have chosen to locate in china because employers are able to pay a lot less for a job than in the UK or a lot of other countries.  Consumers in the UK and the rest of the developed world benefit from Chinese goods as to produce them in China rather than in the UK and then import them is a lot cheaper than to produce them in the UK as the minimum wage is a lot lower. Workers in China think globalisation is a good thing as it means employment and jobs for them, otherwise they would unemployed and couldn’t earn anything at all. This is why today most products have labelled on them “Made in China”.

Globalisation is a bad thing for China as most of the time all globalization really does is make the rich richer and the poor poorer. In most LEDC’s standards of living are dropping further behind the richest countries. The gap in incomes between the 20% of the richest and the poorest countries has grown from 30 to 1 in 1960 to 82 to 1 in 1995. The increasing interdependence of countries in a globalised world makes them more vulnerable to economic problems like the Asian financial crisis of the late 1990’s.

Many environmentalists are against globalisation because it causes a lot of transporting of exporting and importing products which cause pollution. Another reason why globalisation is a bad thing for china is that the national culture and languages can be eroded and destroyed by the modern globalised culture. China is helped a lot by globalisation as it provides many jobs which brings in money, but it is also a bad thing as it is making the difference between rich and poor a lot greater. Personally I think that globalisation is a good thing for China and helps them a lot as without it China would not make as much money as it does currently and China would not be the same country and would not be as developed either.

“Globalisation is a good thing” to what extent do you agree with this statement?. (2016, Apr 27). Retrieved from https://studymoose.com/globalisation-is-a-good-thing-to-what-extent-do-you-agree-with-this-statement-essay 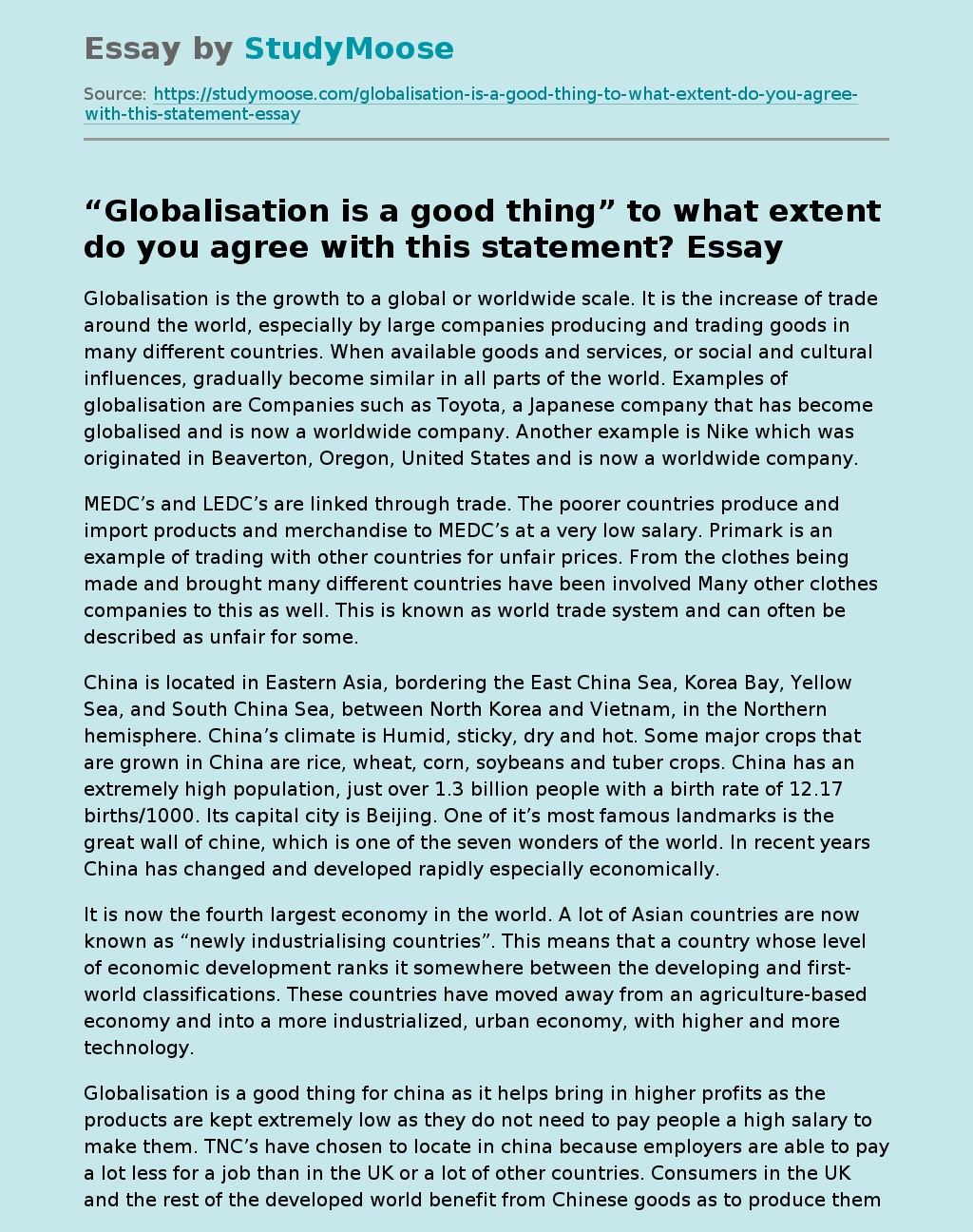