How were the French able to dominate the worldwide wine trade for centuries ? What sources of competitive advantage did they develop to support their exports ? France and the Mediterranean region is closely tied to the Wine History. It has started since the Roman Empire, and has been fully integrated to the European culture with the Christian era : Monasteries planted vines and built wineries.

The nobility started also planting vineyards as a mark of prestige. In this early market, France has been dominant thanks to key advantages : 1.

Factors Conditions : First, their geographic and climatic features played significant role. As France is in the middle of Europe culture with suitable climate and soil condition for harvesting grape, had accrued first-mover advantage and established its place as the dominant competitor in the global wine industry. 2. Demand Conditions : The Distribution and Marketing made the fame of French wine.

The négociants traded wine between France and other countries and this worked as word-of-mouth effect, increasing the reputation and dominance of French wine. 3. Innovation. In the late 18th century, French producers had experienced a massive innovation in the market. Mass production of glass bottles, the use of cork stoppers and the development of pasteurization revolutionized the industry.

Those innovation got the distribution and Marketing easier. These innovations increased the stability and longevity of wine which allowed the transportation of wine to distant places, and birth of global wine market. 4. Government : Protection from the government. As the industry developed, the French government controlled the wine production and quality, regulations like AOC and VDQS, set detailed and quite rigid standards for vineyards and wine makers.

Doing so, the local producers were protected with labels. This classification contributed to make the fame of many wine producers (Bordeaux,…)

Given the longstanding dominance of Old World wine producers, how were the New World producers, such as the Australians, able to expand their market share so rapidly in the 1990’s ? The wine production has turned global. Nowadays, the wine production is no longer the preserved domain of France and other Old World countries. Some countries such as Australia have seen many strong producers challenging the French dominance. The expansion of their market share has been made possible thanks to key advantages : 1 – Factors Conditions :

Geographical and climate factors : suitable lands was widely available and less expensive than in France. This fact, matched with a cheaper labor force, contributed to get the price per bottle lower. Innovation have permitted to get the production cost lower. Controlled drip irrigation allowed expansion into marginal land and reduced vintage variability. The harvesting has been mechanized

2 – Demand conditions :
The intern demand has kept growing since the post war period. In Australia, the annual consumption per capita grew from 2 liters in 1960 to 24 liters in 2006. This demand enable producers to built their marketing expertise in their home market during the 1970’s, then they export it.

3 – Firm strategy, structure and rivalries
Reinventing the Marketing Model : innovative in packaging and marketing. The Australian developed : the “wine in a box” package which is more suitable for the current market. screw caps Australia took advantages of a differentiation strategy. They made their bottle more appealing for unaccustomed wine consumers. In addition, new-world producers learned the value of product differentiation and consumer focused attitudes to create mass appeal. The New World companies controlled the full value chain, extracting margins at every level. new-world producers moved away from multilevel value chains that caused operating inefficiencies. Instead, the new-world producers typically controlled the full-value chain, extracting margins at each level and retaining bargaining power.

On a contrary, The main vulnerable aspects of French wine industry were highly fragmented vineyard and wine production, increasing vineyard prices per acre, complex distribution and sales system, long multilevel value chain, risk of bad weather and disease; and poor roads and complex toll and tax system. Those aspects contributed to the decline of French wine on the market.

What advice would you offer today to the head of the French wine industry association ?

The extent of differentiation was a governmental classification system of quality based on rules and controls. => The wine market was complex and highly fragmented. The classifications helped customers understand purchase Focus was on large volume production, not quality => Wine became culturally and economically significant. In 1750’s, France was the 2nd largest exporter after Italy. As the Global Wine Wars article mentions, marketing style, freedom and willingness to innovate, wine style, and business models of the New World are good starting points for the Old World to copy. In order to compete effectively with the “New World” markets, the “old world” wine producers need to cooperate on various levels. Deregulation of many of the existing laws that appear to be competitive barriers would be a starting point. Getting the European Union to review the AOC, DOC, and WDQS classifications to create a vastly simpler system would make it easier for them to penetrate the mass market.

Allying with some of the “new world” markets such as Argentina and Chile would help offset some of the advantages the U.S. and Australia have with regards to land, mechanization of labor, and low cost labor. Taking these markets under their umbrella would lend credence and value to Chilean and Argentinean wines and also open doors to penetrate the growing South American wine market which is not nearly as saturated as other markets. Trading industry know how for access to cheap land and labor is becoming more and more of a necessity with the growth of globalization. Taking advantage of established new world innovations would also be seen as an easy way to increase productivity of small lots.

The relatively small lot size which divides the old world into many distinct regions is a crippling handicap. If the smaller wine lots were able to coalesce into cooperatives, they would be able to market more efficiently due to increased resources. Also, despite the originality of the Old World wines, perhaps a break with traditional methods could increase the marketability with the fresh generation Y market.

Focusing these revamped marketing efforts in the Asian market with a keen eye towards ensuring the “distance” problems are resolved as they arise would also give an edge to the old world.

By attempting to pull out of the “red ocean strategy” and moving more towards the “blue ocean strategy” the old world could feasibly remove many of the aspects of competition that are harming it currently. Besides the Far Eastern market, there are possibilities in Canada (who shares many old world ties), the Middle East, Africa, and perhaps Latin America. Reanalyzing the “government solution” for flaws that hurt the old world wine countries would also be a viable means of making the old world more competitive. If all else fails, old world growers could band together to fund and support the CAV on an international level and see if positive results could be had from the CAV’s worldwide efforts. 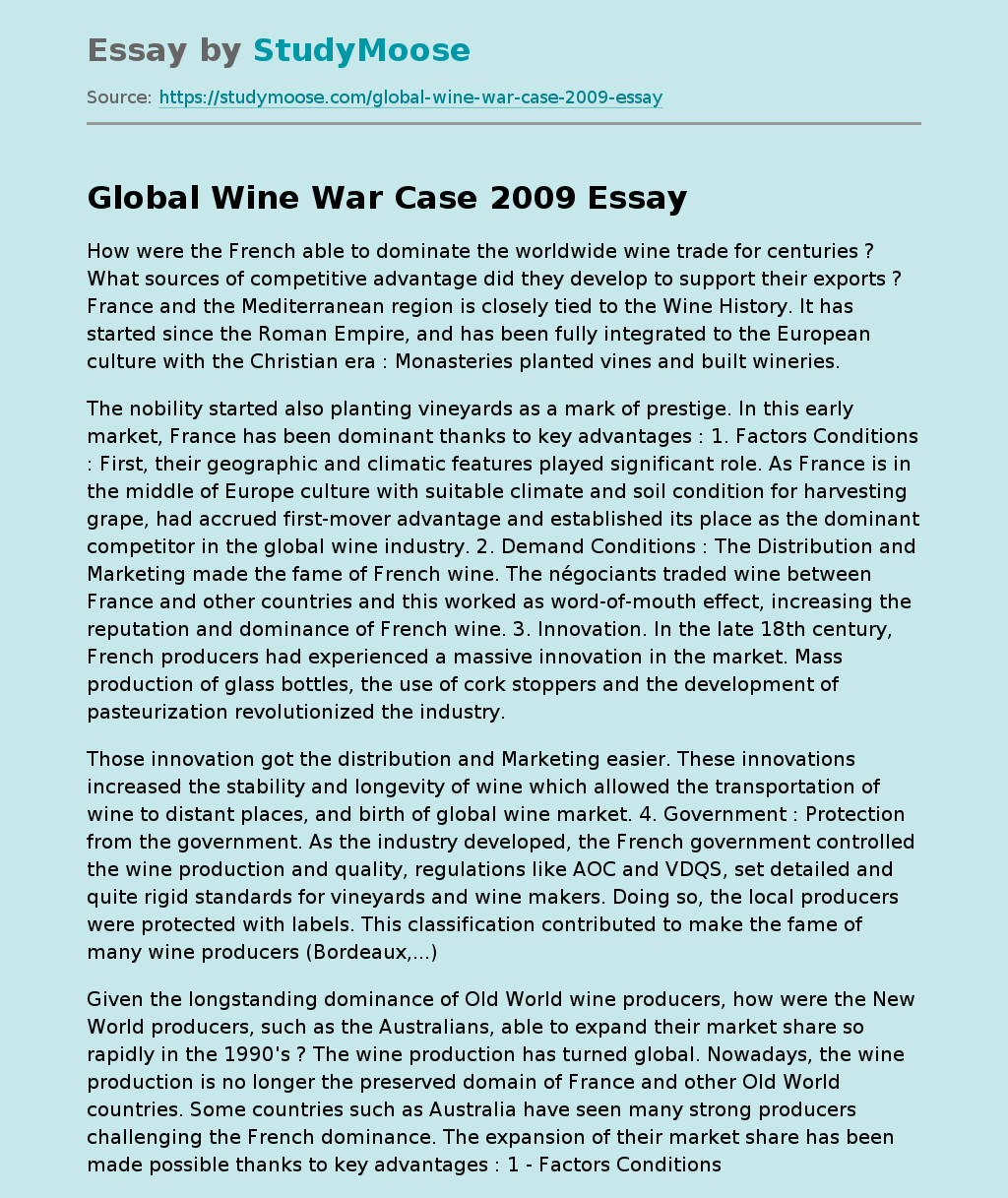