The process in green plants and certain other organisms by which carbohydrates are synthesized from carbon dioxide and water using light as an energy source.

Most forms of photosynthesis release oxygen as a byproduct.

Easily, we can explain the reaction like 6 molecules of water plus, 12 molecules of Carbon Dioxide plus Sun energy, cross with chlorophillian pigment, in the product we have glucose, plus oxygen, plus water. We can put so briefly the process saying that the organisms use the energy from sunlight to produce sugar, which cellular respiration converts into ATP, The conversion of no usuable sunlight energy into usable chemical energy, is associated with the actions of the green pigment chlorophyll.

Most of the time, the photosynthetic process uses water and release the oxygen that we absolutely must have to stay alive

Importance of the photosynthesis:

Animals and plants both synthesize fats and proteins from carbohydrates; thus glucose is a basic energy source for all living organisms. The oxygen released (with water vapor, in transpiration) as a photosynthetic byproduct, principally of phytoplankton, provides most of the atmospheric oxygen vital to respiration in plants and animals, and animals in turn produce carbon dioxide necessary to plants.

is when the earth heats up (the temperature rises). It happens when carbon dioxide, water vapor, nitrous oxide, and methane trap heat and light from the sun in the earth’s atmosphere, which increases the temperature.

Some gases in the air are called “greenhouse gases”. These are gases, like water vapor and carbon dioxide, that are transparent to visible light (from the Sun), but absorb infrared light (from the Earth).

When visible light from the Sun hits the earth, it zips through the atmosphere, hits the earth, and warms the earth. The earth emits some of this energy back out into space, keeping the planet cool. But the energy we emit is in the infrared, and some of that is absorbed by greenhouse gases in the air instead of going back out into space. When that happens, the air gets warmer — and the planet as a whole gets warmer too.

We humans used to burn wood for fuel. When we burned wood, the carbon dioxide we were releasing was the same carbon dioxide that the tree extracted from the air when it was growing; so the net effect was zero: as long was we planted a new tree to take the place of the old one, no “extra” carbon dioxide got into the air.

How does photosynthesis affect global warming?

When I was doing my research I saw that now the scientist wants to contrarest the global warming with artificial photosynthesis, that this is a new study that they opened to make possible the artificial plants for future time, when the photosynthesis that we have here it will not eough.Global warming is the increase in the average temperature of 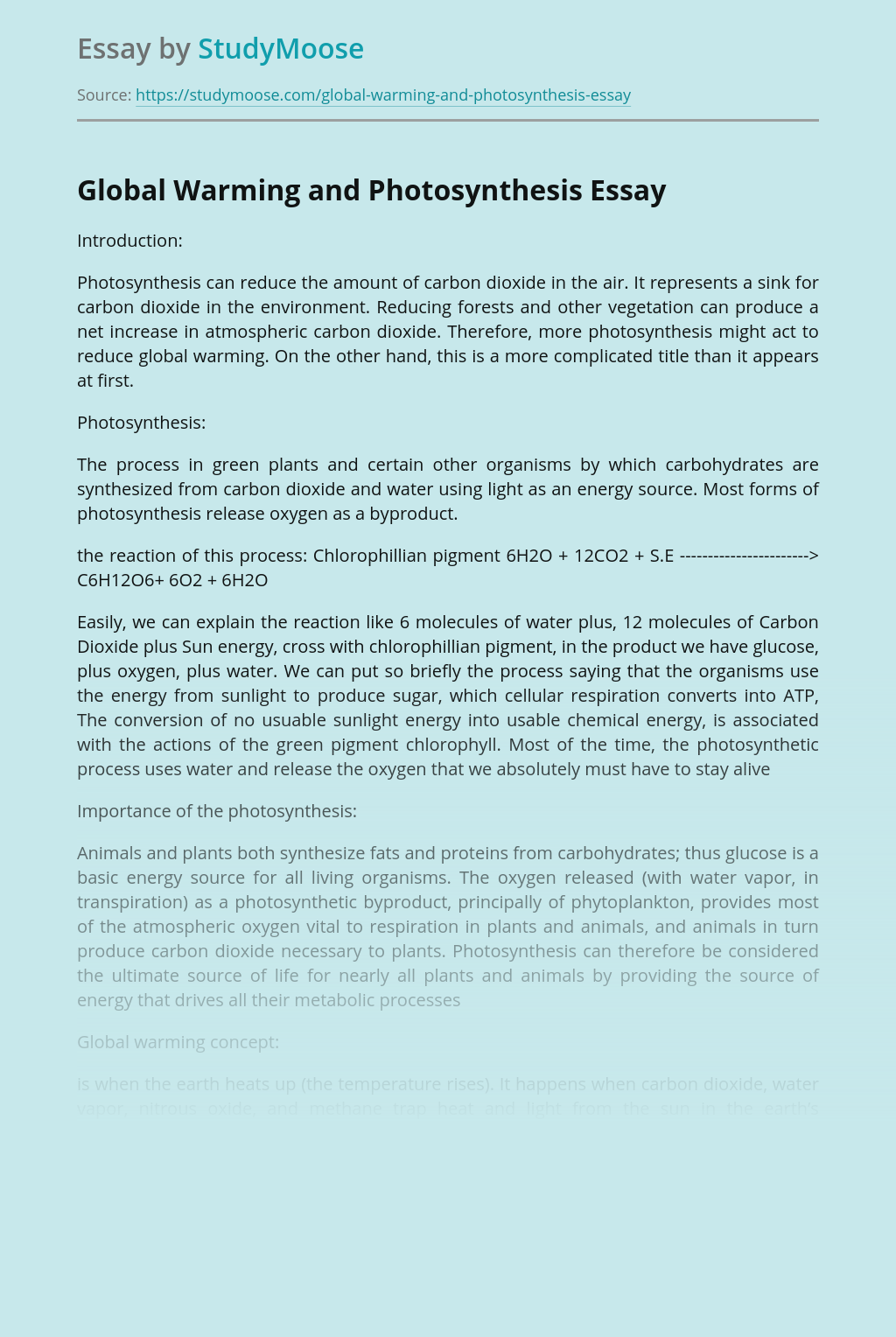 Don’t waste time
Get a verified writer to help you with Global Warming and Photosynthesis
Hire verified writer
$35.80 for a 2-page paper
Stay Safe, Stay Original