With its global headquarters in Detroit, GM employs 235,000 people in every major region of the world and does business in some 140 countries.

Don't use plagiarized sources. Get your custom essay on
“ Global Strategy at General Motors Company ”
Get custom paper
NEW! smart matching with writer

General Motors Company acquired operations from General Motors Corporation on July 10, 2009, and references to prior periods in this and other press materials refer operations of the old General Motors Corporation. Though GM had a long presence in developing countries, until recently sales there accounted for only a little fraction of the company’s total international business. Traditionally GM used the developing countries as a dumping ground for the obsolete technology and outdated models and earned huge money from this aging investment.

This strategy has seen as lack of commitment from top management and GM offered very low quality, made of old product.

All decision, plan and marketing decision were centralized by Detroit headquarter and they acted as a market context. GM kept in its mind about the poverty, crime, geographical situation and politics and communism in the developing countries. On the other hand, GM Detroit headquarters kept away GM European operation from other part of the world. And because of this arm’s-length-basis, company had failure to share all the valuable technology, skill and practice among the subsidiaries.

But it had appealing market, and high profit opportunities in the Europe. So, GM did tailor the specific market needs because it had worried about blowing off from market if it didn’t tailor the specific market. So, while the GM tight controlled over its operation in the developing country but in the some time GM was too lax in Europe and felt lack of overall strategic coherence. Since 1997, GM has been trying to switch a philosophy that centre of excellence may reside any where in the global operation. An embodiment of this is to set up new four plants in the developing countries with investing $2. billion. And the four plants are identical and they can able to imitate Toyota. At the Eisenach plant, GM leant lean production from Toyota and implemented this. So the plant which productivity rate is at least twice that of most North American assembly operations is most efficient in Europe operation and the best in GM. Although they reach the more scale economics, more efficiency, more synergy, and ability to match local preference, but this strategy are not working because GM still suffers from high costs, low perceive quality.

Finally, GM thinks that the push toward global cars is misconceived. At the Opel’s Russelsheim design facility, the German based engineering has uttered concerns that distinctively European engineering features may be left by the wayside in the drive to devise what they see as blander “global” cars. Question-1: How would you characterize the strategy pursued by GM in the (a) developing world and (b) Europe before 1997? Answer: The question asked to characterize the strategy pursued by GM in the developing world and in Europe before 1997.

So, first of all it is very important to notice that in this question we have two important information for discussion: First information: there are two main market areas for GM’s international operations: Europe and the developing world which is made up of Latin America, Asia and eastern Europe and the strategy pursued in these two markets are totally different. Second information is that there’s a key date in GM’s history which is 1997. This date is an important turnaround for GM. Strategy in developing countries before 1997

All the strategic decision, marketing and manufacturing plans were centralized by Detroit headquarter

Low commitment policy was there since GM select developing countries as a dumping ground for obsolete technology and outdated models The context:

This means that the product offer was very low quality, made of old products that would have not been sellable in a competitive, developed market like the US or western Europe. From the case we also noticed that all the strategic, planning and marketing decisions were centralized in the Detroit headquarter. So, this means that the top management didn’t consider important to have a direct contact with those markets and didn’t want “trust” local subsidiaries to manage on their own. They thought they could manage the developing market from their desks in Detroit.

Lack of initiative or just plain Yankee arrogance weren’t the main reasons. We think the GM management acted accordingly to the market context. In fact to understand their strategy, we must keep in mind that the geopolitical situation before the nineties in South America had instability both in politics and economy, poverty, crime and sometimes civil wars. In Eastern Europe and Asia: communism was also known as not favorable to American capitalists. The choice of a low profile strategy was the only chance at these conditions and there were low risk, low investment, low commitment but also low return.

The market share of GM’s vehicles in these markets was very little but, considering the amount of resources invested, it’s not bad at all. After all, this low-cost strategy allowed GM to extend the life of obsolete products without risking to loose valuable resources in risky states. And most important, generating some cash to be invested in more appealing markets like Europe. Strategy in Europe before 1997

And here we go with the second part of the question: strategy in Europe before 1997. Here everything is different. We have an appealing market, high profit opportunities, demanding customers and strong competitors. In Europe you can’t even imagine to sell the same cars you sell in America. First of all because there’s not enough space: streets are smaller, plain and simple. Second, because people have very different preferences compared to US and third because if you don’t tailor the cars to the specific market needs, local competitors will blow you off in a minute.

And you’ll be out of the game. So here’s how GM managed the European operations. They gave local subsidiaries freedom to design, produce and sell new models. Impact of pre 1997 strategy In developing countries:

In Europe, compared to developing countries, customers have a high expenditure capability so if a pressure for cost reduction exists, it’s due to competition but still it’s not comparable to that in the developing world. That’s why we’ve put it in the lower end of the axis. Question-3: How would you characterize the strategy that GM has been pursuing since 1997? How should this strategy affect GM’s ability to create value in the global automobile market? 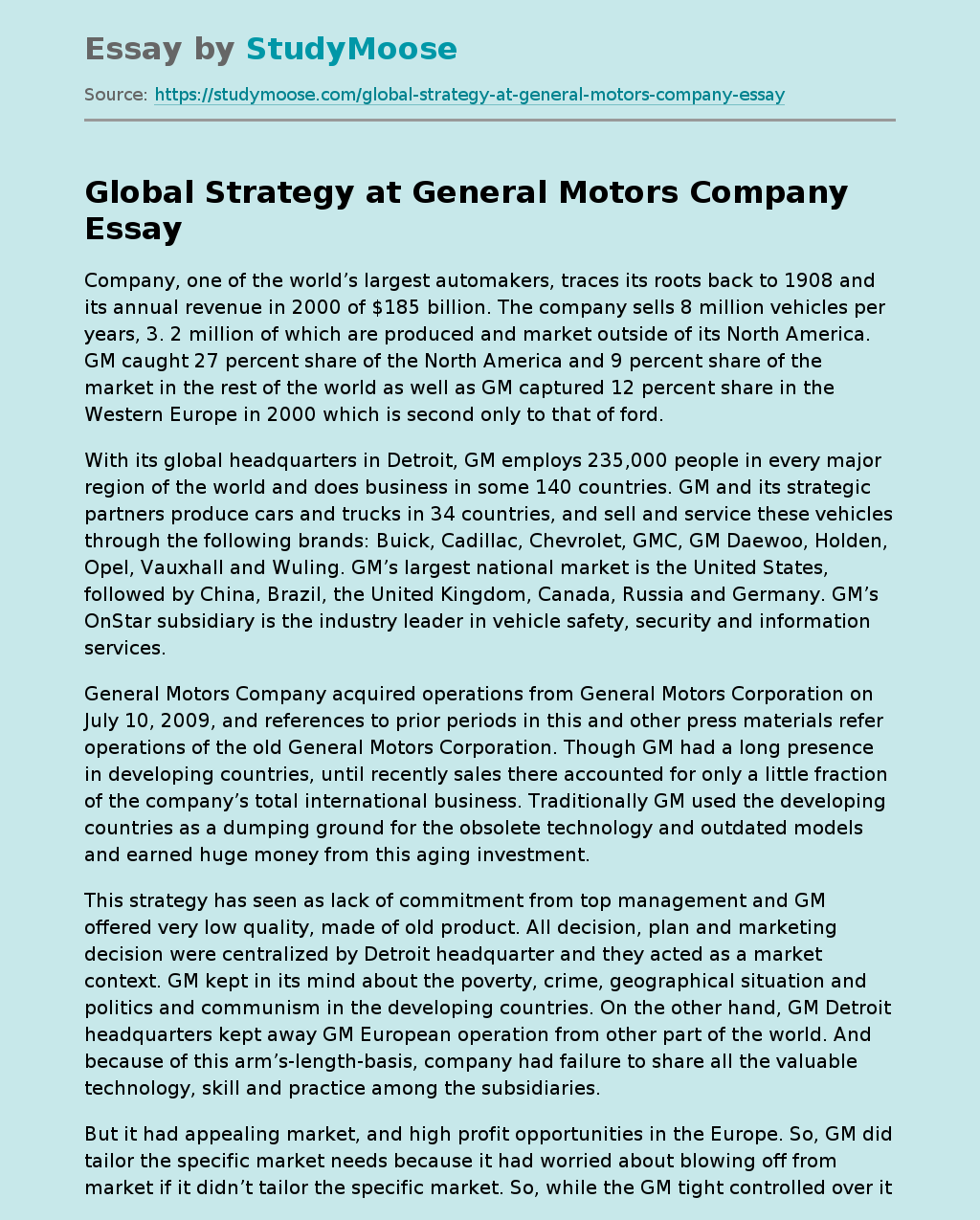