The Global Problem of Counterfeit Medicine

Medicines are chemicals or compounds made to cure, prevent or stop disease and relief symptoms or diagnose certain illnesses.

Medicines are ultimately used to save lives, not just in humans but also in other life forms.

Different types of medicines and how their made?

Medicines come from a range of sources; they come from our biosphere in nature in places such as the Amazon rainforest. For example, the Curare plant is a large poisonous vine rich in alkaloids. The alkaloids relax muscles and are used as an arrow poison.

Don't use plagiarized sources. Get your custom essay on
“ The Global Problem of Counterfeit Medicine ”
Get custom paper
NEW! smart matching with writer

In South America, it is used to treat bruises, fever, edema, and kidney stones.

Other medicines are produced in laboratories by incorporating together a number of chemicals. In other cases such as penicillin; they are a derivative of organisms such as fungus.

A few medicines are even biologically engineered by inserting genes into bacteria that make them produce the desired substance.

Ways on how to take medicine

* Drops that are put into ears or eyes

* Creams, gels, or ointments that are rubbed onto the skin

* Patches that are stuck to skin (called transdermal patches)

* Tablets that are placed under the tongue (called sublingual medicines; the medication is absorbed into blood vessels and enters the bloodstream)

* Injections (shots) or intravenous (inserted into a vein) medications

What is a counterfeit drug?

The term “counterfeit drug” has many meanings because of many countries have varying definitions on it, for example; The Pakistan Manual of Drug Laws is different to the Philippines Republic Act No.

82036. To counter this, the World Health Organization made a universal definition:

In the majority of cases counterfeit drugs are not safe or effective compared to genuine medicine. Regardless of whether they may contain the certain amounts of ingredients needed, their manufacturing and delivery are not controlled by the drug authorities of that certain country. In turn this means, defects and undesirable reactions will not be documented and a product recall can’t be carried out. Overall counterfeit drugs are dire and should be avoided.

What types of drugs are counterfeited?

The extent of the problem of counterfeit drugs

There are many various factors which make medicines worth counterfeiting. Medicines are always needed and supplied; therefore they have a high value in terms of money with relation to their demand. In addition to this, counterfeit ingredients are very cheap if alternatives are used or if these are absent altogether. Creating counterfeit drugs do not need big factories or regular checks and can be made at the back of people’s home to shady alleyways. There are no quality assurances or meeting Good Manufacturing Practices (GMP) standards as the costs of this would not make it profitable enough. Counterfeit drugs can easily mislead people to look like a genuine product and fake labels can be made to deceive buyers that it is coming from a legitimate source.

Additionally patients receive drugs from doctors or health professionals and when they are buying it they do not have the ability to detect whether the product is counterfeit.

Lack of political will and commitment

Trying to control drugs is a vigorous process, they need to be monitored and assed in their development, manufacture, import, distribution chain (where their sold) and require particular knowledge and expertise, which takes many years to acquire. To achieve this would require a strict governmental will, backed by its people to institute a sturdy national drug regulatory squad.

Regulations and legislations form the main pillars of drug regulation. Legislation means; the law which has been circulated by a legislature or other governing body (or the process of making it). If there is no legislation and regulations there are no direct rules that monitor medicines, therefore if a crime is committed in terms of counterfeiting drugs it is not recognised. The World Health Organisation or the WHO have members who follow their drug rules and regulations however only a few member have enacted special national legislation addressing the issue of counterfeit drugs. In addition to this, the punishments and sanctions to counterfeiters are so weak that in most cases this is no deterrent.

Absence of or weak drug regulation

Drugs have to be effective and of fine quality whilst being safe to produce the correct effects. To ensure these effects, requires the creation of ? knowledgeable national drug regulatory authority with the required workers and other resources to organise the manufacture, importation, distribution and sale of medicines. Currently there are 191 WHO members around 20% which are well reputable in terms of its drug regulation; however of, in relation to the outstanding member states 50% are implementing drug regulations at altering levels of development and functioning capability.

The remaining 30% either have no drug guideline in position or ? extremely limited facility that hardly functions. Unsatisfactory, ineffective or weak drug regulatory control could promote unfettered importation, production and distribution of drugs, leading to the increase of counterfeit drugs in the national market.

Performing prevention on anti-counterfeiting legislation unaccompanied will not resolve the problem. It must be obligatory. Where current laws are not put into effect, crime is continued as criminals are not fearful of being arrested and prosecuted. Easy-going punishments, for crime tends to give confidence to criminal activities such as medicines’ counterfeiting, for the most part when the consequences for counterfeiting non-medicinal products are more severe. Furthermore, taking no notice of trademark rights possibly will support great levels of counterfeiting of drugs.

Corruption and conflict of interest

The competence of recruits is unfavourably affected by corruption and conflict of interest ensuing in laws not being enforced and criminals not being in prison, put on trial and convicted for their offence. This can be done by making governments have the need to construct up schemes to decrease corruption. One approach by the WHO is to “empower public interest and consumer groups to participate in drug regulation and to make regulatory authorities accountable and their decisions transparent”.

In circumstances where the need for medicines goes further than supply, unlawfully minded people and companies are likely to profit out of crime by manufacturing and distributing counterfeit medicines as ? substitute for genuine medicines. Also, customers who use medicines incorrectly make orders for such medicines, of which the starting place may be counterfeit. For instance, the misuse of creams encased with steroids for skin bleaching and of body building medicines has created ? marketplace for counterfeit steroids containing medicines. These medicines are time and again frequently distributed through unofficial channels or illegitimate markets.

Lack of regulation by exporting countries and within free trade zones

Medicines made to sell overseas are not looked out for by numerous exporting countries to the identical criterion as those formed for household use. To add to that, pharmaceuticals (also referred to as medicine, medication or medicament) are from time to time exported through free trade zones where drug management is negligent and where repackaging and re-labelling occurs. Trade understanding like the above can provide better chances for counterfeiters to introduce illegal substances into the allocating chains even when the system is highly regulated.

Trade in medicines hardly ever takes place among the manufacturing country and the importing country. At this moment time, it takes place from one side to another side via more intermediate countries or operating or also known as trading houses. In trading houses they may sometimes engage repackaging and re-labelling which may be carried out without any controls under conditions that do not act in accordance with with good manufacturing practices’ requirements.

What to do, if you have purchased a counterfeit drug?

If you believe you have counterfeited drugs keep the drug, packaging and receipt then contact a company called the; Food and Drugs Administration or the FDA which can be contacted by calling 1-800-FDA-1088 (1-800-332-1088) or online at www.fda.gov/medwatch.

The Global Problem of Counterfeit Medicine. (2020, Jun 02). Retrieved from https://studymoose.com/global-problem-counterfeit-medicine-new-essay 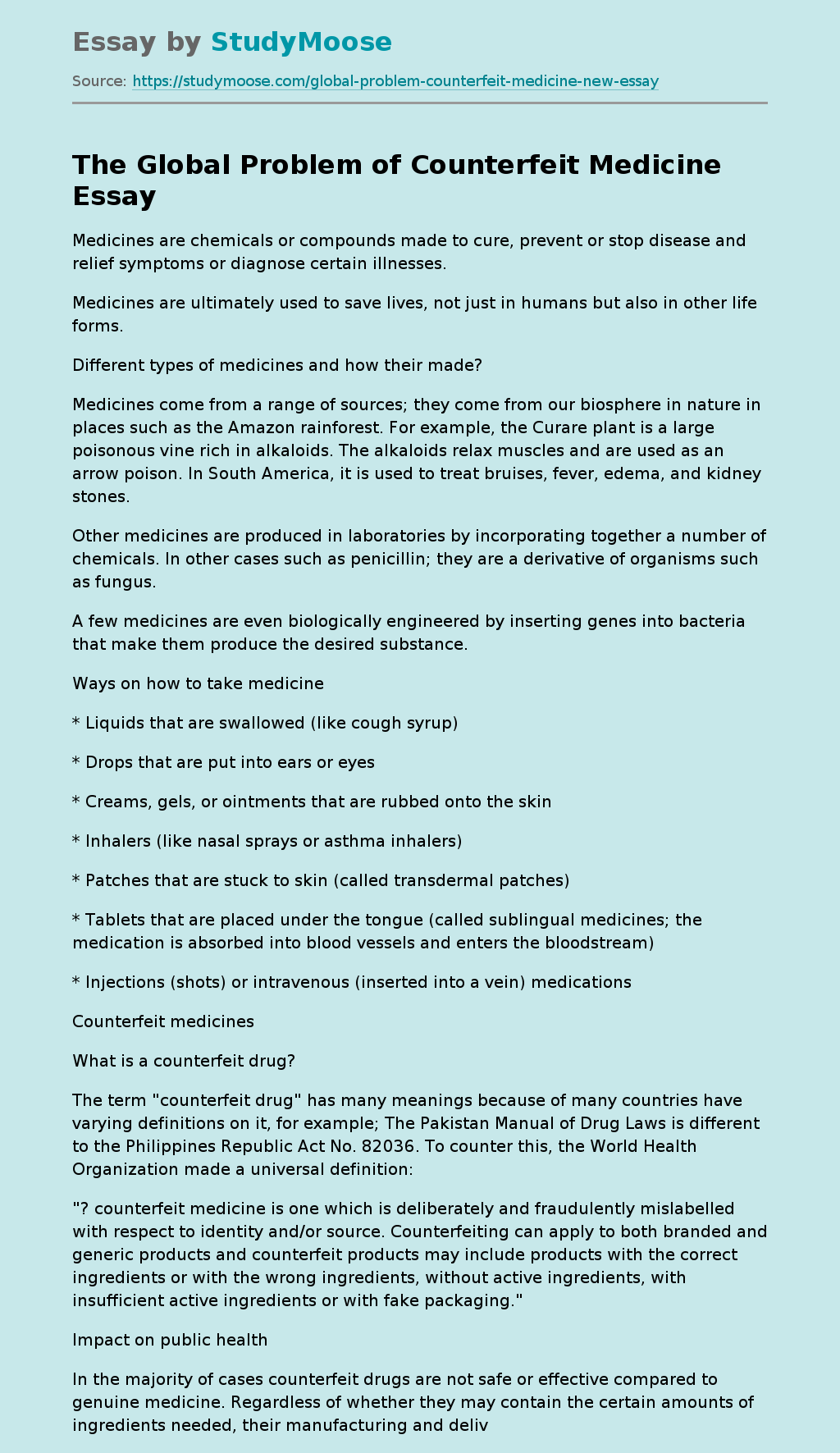