Whenever we talk about world energy source issues, everyone shows concern because the oil prices are increasing all the time. In addition, energy sources are depleting and will be exhausted one day. This phenomenon is called “the global oil crisis”. According to a theory by King (1956), all nations around the world will face an oil production crisis following a bell shaped curve based on the limits of exploitability and market pressure. Of course, not every nation will be faced with “Peak Oil”, it is based on the individual nation’s perspective and calculation of understanding peak oil.

Don't use plagiarized sources. Get your custom essay on
“ Global Oil Crisis ”
Get custom paper
NEW! smart matching with writer

There are three main contributing factors that have caused this current global oil crisis: political instability, market pressure and the depletion of natural resources. Crude oil is one of the fundamental energy sources used by man. Oil is the main energy source to run the daily transportation, factories and make electricity. In view of this, energy sources have a worldwide demand in the global market.

Every nation’s lifestyle and economy is still dependent on exports as a source of revenue.

To influence the price of crude oil and get rid of unnecessary fluctuations in the international market, one of the international organizations was form which is calling OPEC (Organization of Petroleum Exporting Countries). OPEC is alliance of thirteen nations that control over fifty percent of the world oil and natural gas export. OPEC members are Iran, Iraq, Kuwait, Saudi Arabia, Venezuela, Algeria, Indonesia, Qatar, Nigeria, Libya, United Arab Emirates, Angola and Ecuador.

Therefore, OPEC has a strong influence on the international market, especially when it makes a decision either to reduce or increase its oil production in the oil market.

Political instability is one of the causes of the oil prices increasing in the global market. Political in nations producing oil country play an important role to influence the global oil market, success or failure in the relationship between the nations will give big impact on the international oil market. A series of evidence event has proved that political instability has cause the oil prices increasing.

For example, in 1974, the political conflict between Arab nations and Israel resulted in several Arab exporting oil nations imposed an embargo on the countries who supporting Israel. Oil prices went from $3. 00 per barrel to $12. 00 which meant the price of oil had been quadrupled and it was caused by political instability in the Middle East. A series of political conflicts such as crisis in Iran in 1979, the Iraq-Iran war 1979, the Gulf War 1990, and the Iraq-Kuwait war 1990 contributed to the level of prices in the international market. Market pressure is another cause of the global oil crisis.

Oil has a strong worldwide demand within the world’s population continues to grow. Billion of prosperous people especially in China and India will continue to push pressure on the oil market even though the price of oil is expensive. This is because they need energy sources to run their industrial sectors and transportation sectors. To meet with the market pressure, many oil producing nations have met with the limitation of oil supply due to the limitation of oil producing. To control the market pressure, the price of oil has to become expensive in the global oil market.

Thus, it will give less demand on crude oil in the global market Apart from that, other external cause also result market pressure on the global oil crisis. For example, the shortage supply problems resulting from the Hurricane Gustav on 26 August 2008 have tore up Gulf Coast oil production and refining. As a result, the price of crude oil rises slightly in the oil market (Goldman 2008). The depletion of a natural source is another of the causes of the global oil crisis. Now, many of the nations around the world are faced with the “peak oil” crisis.

Peak oil means the oil production has met its limitation and therefore the rate of oil production will decline in the future. Sample nations of oil producing country experience with peak oil crisis, US peaked in 1971 followed by the North Sea in 1999 and Mexico in 2006. Oil production in the Middle East and the Russia has not experienced it yet, but it will come eventually. Because supplies of oil and gas can increase the income of a country and also, a fall in global oil supplies could cause spiking in commodity prices and slow down a nation economy. Transition…..

These three causes not just only will give long term impact on all nations’ economy and lifestyle of citizen. Global Oil Crisis Effect on Social Increasing oil prices will make a lot of people suffer due to the high living cost. Increasing in oil prices in the global market meant increasing other commodities prices, especially food and the cost of transportation. People need food to continue to survive, but at the same time people need transportation to deliver food into the market. In addition, people also need transportation to run their business and earn profits to overcome with the high living cost in modern nowadays.

Global oil crisis will affect on the world business. All nations around the world need petroleum products to run their business trading: export and import. This is one of the tradition ways to gain revenue of a nation country. However, oil crisis can make some of the nation’s economy slow down, whereas, at the moment, it can make some of the nations boost up their economy financial. Based on the research, OPEC countries members will get benefit while the oil crisis happens around the world. The reason is that those countries member hold large of oil producing in the world and also it holds 80% of world reserves (The future of oil and gas n. ). According to the Conclusion of Hanson: “By 2010, Muslim nations could control 60 percent of the world’s oil production and, more importantly, 95 percent of the world’s oil exports. In short, the Muslim exporting nations have Western economies by the throat”. Apart from that, the currency around the world will be fluctuated due to the limitation of oil supply to the oil market. A nation’s currency will drop if the prices of petroleum products increase in the global market. This is because expensive crude oil has force consumer use more of their income and afford to purchase the petroleum products.

And, at the same time they will spend less with other goods and services such as convenient goods and shopping goods. Decrease consumer expenditures meant decrease a nation’s revenue. Global Oil Crisis Effect On Political The effect of global oil crisis not just effect on economy and social, but it is considered give a huge impact on political in the world business. There have a lot of evidence prove that the oil crisis had made conflict between those who have oil producing and those who do not have but are wiling to pay and buy it. Crude oil is nonrenewable resource and also it is one of the finite products in the international market.

In addition, global oil producer country now had faced with the limitation of oil producing due to the coming oil depletion. Therefore, this kind of energy sources has a worldwide demand from all nations around the world and it can make some of nations conflict. From the research of history, the First Gulf War in 1990 is one of the examples that crude oil had made the political conflict between Iran and Iraq. The reason for Iraq invaded Kuwait is because Iraq accused Kuwait of stealing their oil (Weinberg 2005). Followed by the Second Gulf War in 2003, the US invaded Iraq with the same objective. 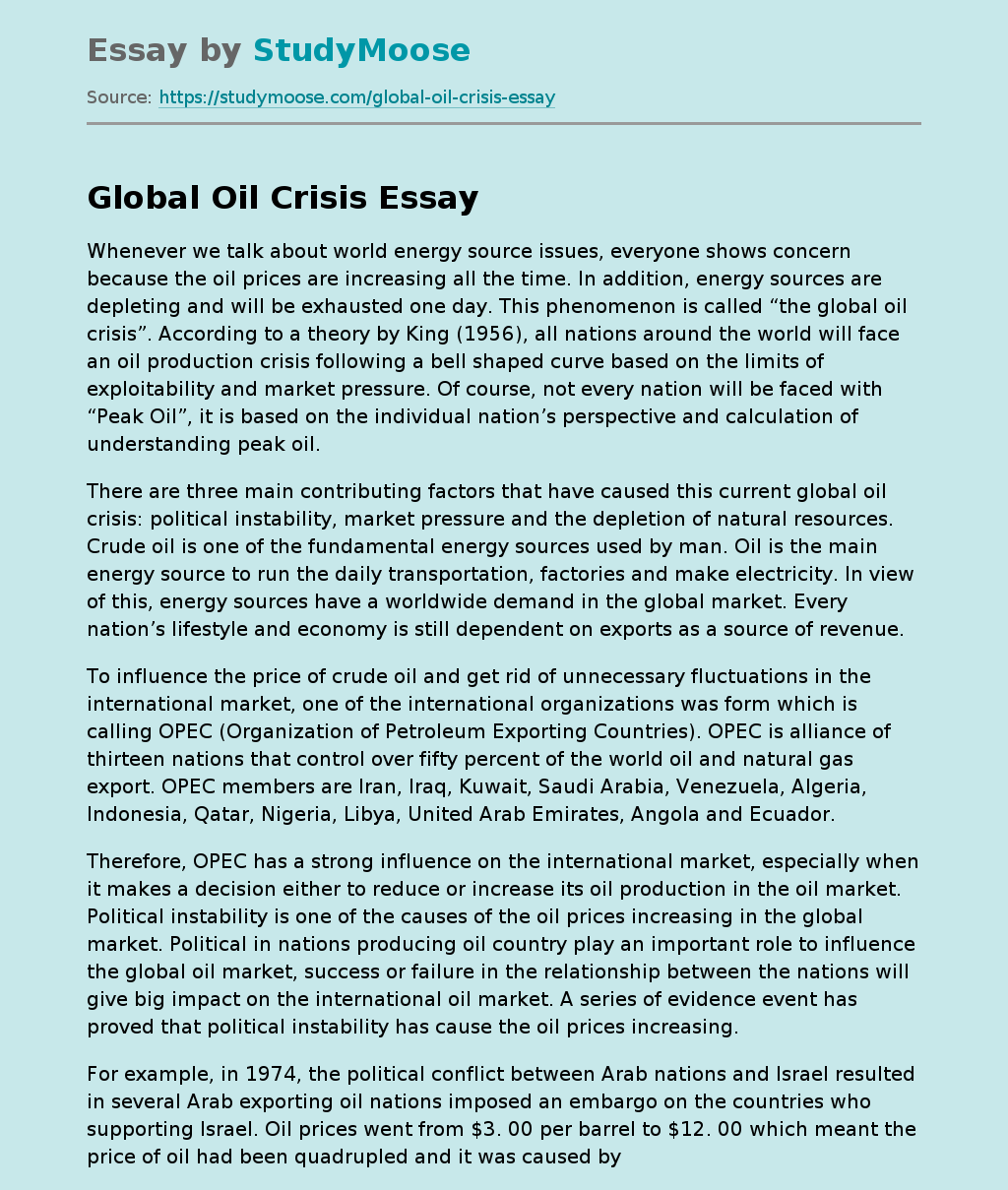