The main pillars of globalization can be termed economic ,political and cultural globalization. Migration has helped to formation of global cities. Global cities has been considered as pillars of political centers, commerce centers, trade centers, finance centers. Rome has been considered as the worlds first global city. Global cities will be centers of innovation and the worlds most popular cities are London and New York. Washington, Melbourne, Paris has been also attracting many migrants.

Don't use plagiarized sources.
Get Your Custom Essay on Global Migration Just from $13,9/Page

Dubai from Middle East region has been attracting many migrants.

The approximate number of international migrants in the year 2002 was 175 million (Sassen, 2001) . Migrants has been representing some 2. 9 % in the year 2000 (Sassen, 2001) . The percentage has been on the rise. It has been estimated that if international migrants stay in a place. they will become the worlds fifth largest country. Historic and Contemporary migration flows There has been a historic perception to the process of globalization and a contemporary form of globalization. For example in America ,the earlier forms of global migration in the 1930s has been mainly from European areas.

That had changed in recent years with the global migration coming mainly from Asian and Hispanic region. Historic forces has been responsible for the contemporary flow of migration in form of economic migration and political migration. The first historic migration can be traced back to the slavery era when large number of slaves were transported to different parts of the world (Mcewan, & Henry 2005) . The invention of ships has accelerated the process. That was followed by period of colonization in which there was forced labor and migration to different parts of colonial ruled countries.

There has been improved communication channels and travel options that has helped varied cultures to migrate to other parts of the world. Now a day it is a common sight to see a Indian Punjabi Sikh wearing a turban and driving a car in America. The same can be said with American heading a Information Technology company in India. Undocumented immigration has been increasing recently. Feminization of migration as labor migration has been increasing contemporary. More females has been migrating as primary bread winner for the family. The key demand has been for the nursing professional.

There is migration of females as family members or as spouses. Contemporary capitalist globalization has been creating condition for labor transfer. The challenges that global migration poses for cities The primary challenge that the cities face will be the absorption of the large population that will be migrating to the city. There has to be adequate building to accommodate the influx of new comers and there has to be overall development in areas like transport, education, health, food, water and mainly waste disposal (Castles, 2003; 12,24).

The main challenge that the city has to overcome will be that their voice has to be heard globally. Cities will be losing their unique historic value due to globalization. There has been an invasion of cultural values with certain areas crossing over to new culture. For example Easter culture like Dubai has been embracing Western culture lately with sales of colas increasing. Cities are getting more industrialized there by attracting global talent. That has led to a situation in which the people flocking towards cities in search of good job.

That has led to globalization of poverty also as majority of people live in cities with meager income. poor people has been facing increased pressure of less sanitation . That has led to severe health problems in the cities. The streams and other water supply has been getting polluted daily. The migrant people will be facing problems to get access to good health system due to problems in language. Spreading of infectious disease has been on the rise due to migration and there has been alerts against spreading of dangerous viral fevers.

Severe acute respiratory syndrome or SARS and H1N1 has been the recent examples for spread of disease. There has been strains on urban infrastructure due to explosion of migrants to cities. There has been pressure on cities to improve their public services so people will be given an option of environment friendly travel option. There has to be increased local taxation to find the financial resources for this and cities like New York has been enjoying much needed financial independence for this. There has to be efforts to accommodate the busting traffic problems in global cities.

Population density and urban centric people has led to more problems in city. That has also led to the increased land prices, and housing situation that has been deteriorating day by day . The quality of air and water has been deteriorating in global cities. The increase of carbon emission has been leading to increased problems like ozone depletion. There will be more energy consumption in the cities leading to depletion of natural resources. There has been only limited migration opportunities in some countries for females and they have resorted to illegal methods of migration.

Criminal global migrants has been taking advantage of the visit visa system to certain countries and doing crimes in cities and going back to their point of origin. That has made the life of cities less secure. Drug trafficking has been also increasing. Money laundering has been on the rise along with gambling and other illegal activities like prostitution (Bertell, & Hollifeld 2000). Money laundering has been effecting global economics. Important sports events like Olympics has been attracting migrants for short times and that will includes sex workers leading to increase in organized crime.

There has been increased disparity in the income and wealth generation inside a city that has led to increased tension in the cities. Migrants having a problem in speaking the language of the city will be having problem in getting a good job and the pressure of living in the city will be leading to more organized crimes. Conclusion Globalization will be leading to more international migration. There has been changes as migration with earlier form of migration being forced. The contemporary form of migration has led to increased pressure on cities .

There has been climatic problems, health problems smuggling issues, drug issues ,clean water issues and clean air issues ,that has been associated with international global migration. The other associated problems that has been identified has been the human trafficking and terror links. There has been increase in feminist international migration and that had been happening because of increased employment opportunities. Money laundering has been effecting the economics of countries. List Of References Bertell, Caroline & Hollifeld . (2000) Migration Theory. 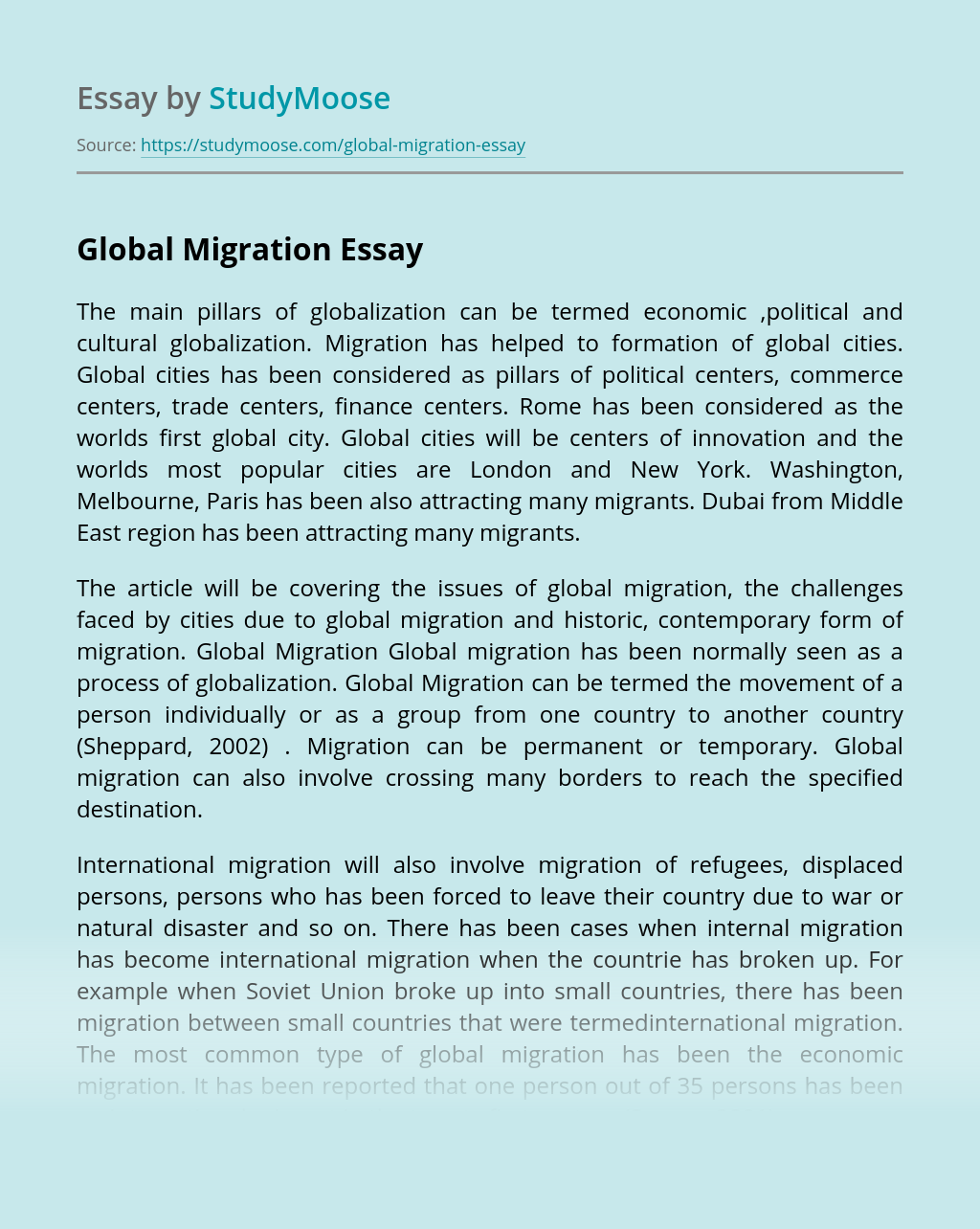 Marquis vs. Thomson on Abortion

Kidulthood is a realist drama set in West London, made in 2006. It shows stereotype with teenagers and gender. Stand By Me is a film about four young teens going on a adventure to find a dead body. This film was made in 1986 but was based in 1959. The four boys lice in a... VIEW ESSAY

Communication is the activity of conveying information through the exchange of thoughts, messages or information; as by speech, visuals, signals, written work or behaviour. It is the meaningful exchange of information between two or more living creatures. Communication requires a sender, a message and a recipient although the receiver does not have to be present... VIEW ESSAY

View sample
Everyone Struggles with Their Identity

Identity is an intrinsic idea of one’s life. Whilst there are no certainties, the struggle of identity often happens, and the conflicts may depend on the individual himself. The conflict may occur due to various factors in one’s identities including their sexual orientations, skin colour and religious background. These variables may cause noticeable damages to... VIEW ESSAY