Give Me Liberty: Chapter 17 Outline

Populists or people’s party members were part of this era’s greatest political insurgency. It evolved from the Farmers’ Alliance, where farmers across forty-three states banded together to remedy their condition. The people’s party not only attracted farmers but also included all the “producing classes.” Their lasting legacy comes from the populist platform of 1892 and also from the fact that populism came close to replacing the two already existing parties.

Explain how a system of racial segregation was established in the South: Since populism failed in the south, it was open to the induction of a new racial order.

Don't use plagiarized sources.
Get Your Custom Essay on Give Me Liberty: Chapter 17 Outline Just from $13,9/Page

As much of Reconstruction was undone as possible by the Redeemers, so called because they believed they saved the region from alleged misgovernment and impending “black rule.” New laws were created that jailed anyone without a job, and the punishment for petty crimes was increased tenfold. Of course, the black population suffered the greatest after this. Then, convict laboring became popular which basically put blacks right back into slavery.

Blacks continued to be denied high paying jobs, but a black middle class began to arise in the urban communities consisting of people with professions such as teachers and professors. Blacks in politics declined also, though not abruptly. They eventually lost their right to vote. In Plessy v. Ferguson it was made legal to segregate public places. Lynching also rose in popularity again.

Describe what ways the boundaries of American freedom grew narrower in this period: At the end of the 19th century, the thought process of Americans changed quite a bit, towards the idea that freedom should not be offered equally, only to the right and supposed deserving people. An Ohio newspaper stated that the influx of immigrants was overrunning cities, and that they “have no appreciation of the true meaning of liberty.” Most of the immigrants in this period came from Italy, Russia, Austro-Hungarian empires, and other countries in Southern and eastern Europe. Immigrants were looked down upon as horrible excuses for people who are inclined to steal and commit crime from birth. People started to look for a way to limit the rights of these people, and also prevent more from entering. In Boston, the immigration restriction league was formed and proposed that literacy would be required to enter the country. This was adopted by many states. Blacks also continued to see less and less rights in the South, as well as disenfranchisement. Suffrage was becoming more of a privilege in America, instead of a right.

Explain how the United States emerged as an imperial power in the 1890’s: America started out slow as government officials and business owners decided the land and resources they had weren’t enough. At first, proposals to annex other countries were vetoed and over-sea focus remained mostly on trade. Then, a group of late nineteenth century thinkers proposed an idea of updated manifest destiny, and that the most beneficial thing to do for the world was to impose the Anglo-Saxon traditions on uncivilized societies and turn them into consumers of American goods.

This was outlined in the book Our Country by Josiah Strong. Alfred T. Mahan took advantage of the time at which western expansion ended, as all land was finally claimed by a state. He published a book that urged American expansion to move outward because we could no longer capitalize on our own land. This book influenced James Blaine, secretary of state during the presidency of Harrison. Harrison requested the construction of four new battleships, while Blaine encouraged the president to push for Hawaii, Puerto Rico, and Cuba to be set up as naval bases. The depression further exacerbated these ideas and plunged the country into a period of aggressive nationalism, where newspapers containing sentiments of nationalism views sold like hotcakes.

The Farmer’s Alliance – Farmer’s in the early 1890’s felt disenfranchised, so they banded together to aid each other. Spread across 43 states. The Populist Party – Evolved from the farmer’s alliance, except it included all working classes. Their platform still remains a classic American document. They sought to redefine the idea of freedom in the contemporary government. It attracted many followers, including a large number of women who wanted suffrage, and a small number of blacks. Populist Platform – Consisted of six main items:

William J. Bryan –Second candidate chosen by populists for president. He was supported by democrats as well and ran as democrat even. He condemned the gold standard, and advocated free silver and unrestricted minting of silver money. He hoped it would help relieve farmer debts. He was also devoutly religious.

Coxey’s Army – A band of several hundred unemployed men led by Ohio businessman Jacob Coxey demanding economic relief. They marched to D.C. where they were forced to disperse by soldiers.

Pullman Strike – Workers in a company owned town called Pullman called a strike due to low wages. The idea spread and the boycott called by the American Railway Union crippled national rail service, government injunctions were imposed to force laborers to work.

Eugene V. Debs – Charismatic leader of the rail-worker’s union and the Pullman strike, was jailed for contempt of court. On his release, 100,000 people greeted him, and he called them lovers of liberty. He said that state and national government was going to take from the weak their birthright of freedom.

Free Silver – Unrestricted minting of silver money, Supported by Bryan because he hoped to circulate more money to aid farmers.

Election of 1896 – Won by William McKinley, the republican candidate. Bryan who represented the democrats lost by about 6 million votes. Bryan is noted to have driven many republicans to McKinley because of Bryan’s call for inflation and speeches against corporate arrogance. Northeast and Midwest industrial states voted republican, while less populous states voted for Bryan which is why he lost.

William McKinley – Former Ohio governor and republican, won the election of 1896. His campaign manager Hanna created a political machine that flooded the states with pamphlets and other propaganda.

The Redeemers – Claimed to have redeemed the southern region of misgovernment and black rule. They were able to impose their racial order due to the failure of populism in the south. When they gained power they quickly undid as much as they were able of Reconstruction. New laws incarcerated people for the simplest of crimes, and then convicts were bought and sold and used as a cheap form of labor, much like slavery.

The Kansas Exodus – 50,000 blacks migrated to Kansas in the belief they would find political equality, freedom from violence, access to education and economic opportunity. Pap singleton handed out flyers portraying Kansas as a utopia. However, most blacks didn’t have the capital to farm so they ended up getting stuck there with low paying jobs. Decline of Black Politics and voting – Black people gave up their interest in politics after reconstruction, and they sought more fulfilling careers in business, law, or the church. This turned out to be their worst mistake because then their voting was taken away in the south as soon as it was possible. Poll taxes and other voter restrictions were enacted that were aimed at blacks but still lawful.

Plessy V. Ferguson – Upheld the constitutionality of state laws requiring racial segregation in public facilities under the doctrine of “separate but equal.”

Lynching – The murder of a person, usually black, and then hanging them on a tree to ridicule them. Authorities seldom involved themselves in the conflicts even though they knew about them.

American Federation of Labor – Alliance of skilled workers in craft unions; focus was bread-and butter issues such as higher wages, shorter hours, and better working conditions. It was led by Samuel Gompers.

Alfred Mahan – Author who argued in 1890 that the economic future of the United States rested on new overseas markets protected by a larger navy; wrote “The Influence of Sea Power Upon History.”

Josiah Strong – Author of Our Country: Its Possible Future and Its Present Crisis, in which he urged Anglo-Saxons to “civilize and Christianize” the American West. Annexation of Hawaii – American sugar plantation owners began the annexation by overthrowing the country’s queen successfully, which was followed by American military action. McKinley requested a joint resolution of annexation because it was popular amongst Americans although not among Hawaiians.

Spanish – American War – Caused by suspicions of the Maine, support of Cuban independence, economic depression, and Yellow Press Journalism. The effect it had on America was that it pushed it into imperialism, after the war was won by the U.S., they received three new territories.

Teller Amendment – Promised that America would not annex Cuba after winning the war.

Yellow Journalism – Journalism that exploits, distorts, or exaggerates the news to create sensations and attract readers.

The Philippine War – Began after Filipinos incorrectly thought that they would self govern after independence from Spain. McKinley decided he still wanted the islands though, so they revolted and lost.

“White Man’s Burden” – Poem by Rudyard Kipling outlining the contemporary thoughts of the government, which is it is our duty to civilize the lesser races.

Give Me Liberty: Chapter 17 Outline. (2016, Dec 10). Retrieved from https://studymoose.com/give-me-liberty-chapter-17-outline-essay 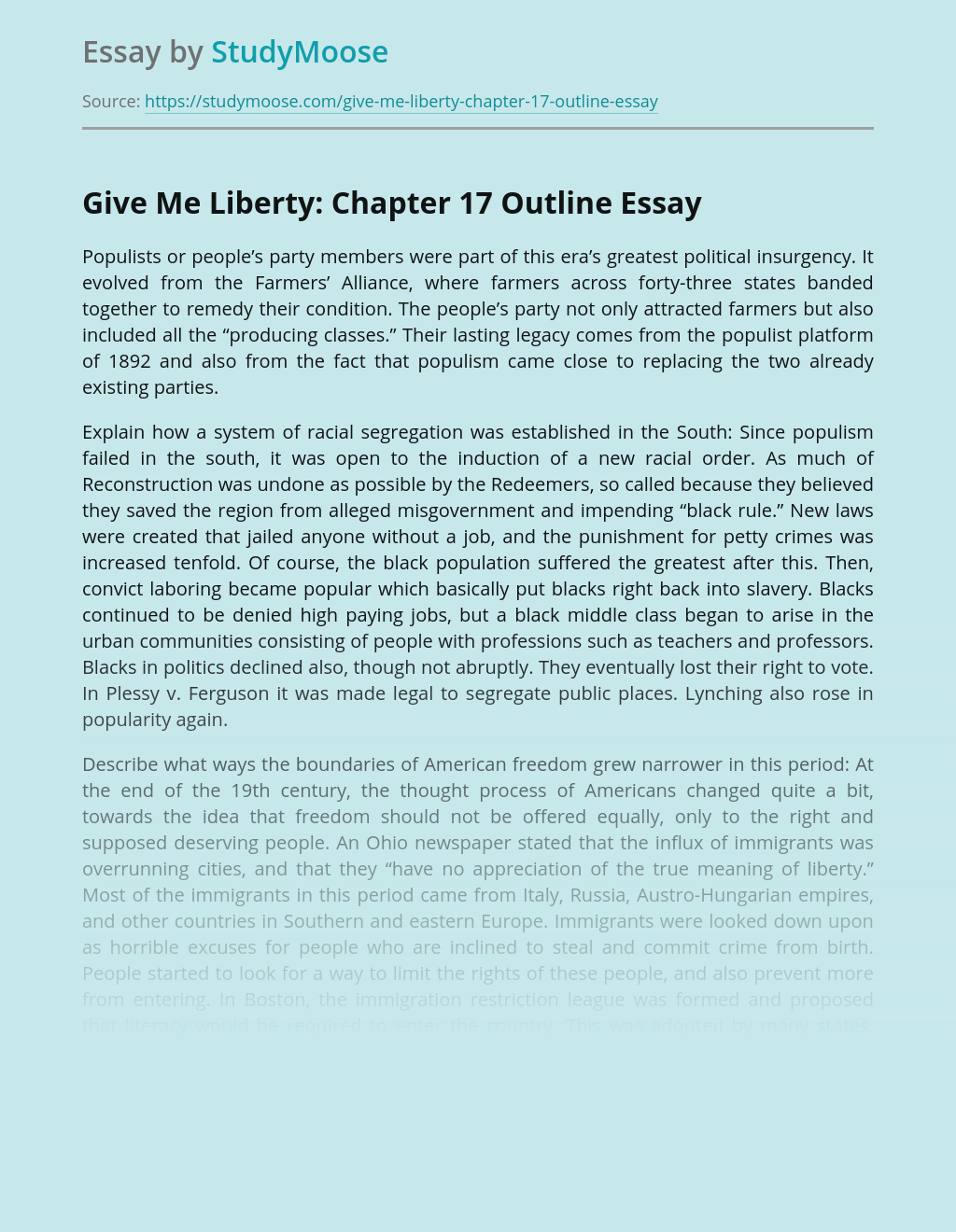 The working environment in the United States is still not free of gender discrimination. There are still many cases of arbitrary discrimination that come to the attention of the public, such as Chrapliwy v. Uniroyal. The court case challenged the system of Uniroyal Inc. (a rubber company), which employed mostly female workers in their footwear...

Political – In class the major political topic that we focused on was possible affects on the industry if immigration laws became stricter. This industry is highly dependent on cheap labor. If all of a sudden there were not enough workers in the industry there would not be enough chicken available to meet the demand....

The Miner’s Wives by Ben Shahn takes a bitter look at one of the lifestyles of the early 20th century – that of the down-trodden coal miner. In the foreground of the picture, we see the miner’s wife referenced in the title. She carries a bleak expression, her back turned to an older woman and...

Human beings put so much value on other people’s interests. They find that if they satisfy their hunger for helping others, they (in turn) will have satisfaction for themselves. This was shown in Mother Teresa’s giving to others without taking anything back. However, as with everything else, there are exceptions. I know many people (i.e....

The Seven Sacraments of the Catholic Church

Sacraments are conserving graces from heaven. They are the symbolic acts or visible indications, arising from the ministry of Jesus Christ and continued in, by and for the Church Jesus Christ established. When gotten in faith, the sacraments style the faithful into the image and likeness of Jesus Christ, the Boy of one of the...