Girls And Boys Playing Sport Together

Girls and boys should not be in co-ed teams due to the injuries, fighting, social issues and the difference in both sexes performance. Another issue is the misunderstandings during physical contact sports, like football, rugby, lacrosse and hockey. Therefore girls and boys should not play sports together because it complicates and presents an unsafe environment. Usually when boys and girls play sports together major injuries occur, especially when the sport has a lot of contact. Studies show that females tend to receive concussions more often when playing sports that allow contact with males.

Don't use plagiarized sources. Get your custom essay on
“ Girls And Boys Playing Sport Together ”
Get custom paper
NEW! smart matching with writer

Doctor Fin from Sunny Brook hospital reports “77% of females who play co-ed sports end up with concussions”. (Linkn17) Between interviewing school sports teams, girls have mentioned a lot that size does matter. Jenny, A rugby player from J.Clarke Richardson explains “It’s scary when you have a huge 6 foot tall, jacked boy running at you and then tackles you to the ground. It tends to hurt you way more when it’s a boy then when it’s a girl, due to the size and strength difference”.

When boys and girls start to grow up strength become an issue. Michael health teacher from Donald A Wilson describes why. ”The difference between girls and boys strength is, when boys hit puberty they get stronger and girls do not.” (micheal30) Therefore teens and adult girls should be prohibited to play sports together because the injuries that follows with it. Co-ed sport teams can cause social issues, as well as bullying, along with physical issues.

Girls are made fun of and called ‘butch’ due to playing on a boys sports team. Alyssa from O’Neil Secondary Explains, “I feel playing with boys is more of a challenge than it is when playing with just girls, but I’m always made fun of by the boys on my team and the girls at my school.”(Alyssa23) Girls can not be in a change room with boys, due to their different body parts. Coach Jim says, “Now that these kids are older boys are thinking more sexual even so the girls are not naked, also they have different body parts so they cannot be using the same change room. This is an issue for gossip, about the girls, or reverse.” (jim43)

Sometimes girls are grabbed or touched by boys unexpectedly and freak out, although the boy wasn’t intentionally doing it. Matt from co-ed rugby reveals, “Onetime I picked up this girl and accidentally put my hand in her shirt and she freaked out, and made a huge scene, I was mad because I wasn’t doing it on purpose and I only touched her stomach.” (matt12) So With all of this information, it is proven that it has caused social issues , physical issues and bullying that still continues due to co-ed sports teams. Girls and playing with boys causes many misunderstandings and a very big change and the ability to perform well during games. Boys sometimes may be scared to perform as usual with girls due to the most common factor, hurting them. Jack from Dolphins foot ball team says, “I was running towards this girl who had the ball but, I got scared because I felt I was going to hurt her, so I slowed down and she got away”. (jack19) Misunderstandings constantly occur in co-ed sports teams like, when a guy touches a girl, but the boy not realizing what he has done because he is trying to treat the girl like any other player, but the girl is taking it into a sexual situation.”He picked me up, with his hand grabbing my butt.

I started kicking him and hit him in the face, I felt extremely violated”. Alexis said from Durham College football team. (Alexis25) Sometimes females back down when a guy 10 times the size of your size approaches you during a contact sport, like football or rugby and hockey, even soccer in some cases.”I had the ball and a guy 30 times the size of me came running towards me and I dropped the ball and ran another direction I got scared I Guess playing with the opposite sexes does have some cons”. Megan from N.D expresses. (Megan18) Co-ed sports have been proven to show a difference and lack in their ability to perform during games. Also the amount of misunderstandings that have lead to fighting is not appropriate and safe environment for boys or girls. Co-ed sports teams should not be permitted due to the consequences along the way.

Males and females playing sports together cause a lot of misunderstandings. Boys have a lot of sexual thoughts when they are teens and like to joke around, but when it comes down to playing their sport their intention is not what, females seem to think. Males have shown that the ability to perform well playing with girls isn’t as strong. Women have shown that the size and strength have stopped them from playing their best due to the fear of injuries. Along with these consequences, social issues have become a problem with co-ed teams. The biggest thing proven is the amount of injuries women get, due to strength and size, well playing on co-ed teams. Girls and boys should not be allowed to play in any physical sports teams together, due to the points above. It should be prohibited.

Girls And Boys Playing Sport Together. (2016, Jun 19). Retrieved from https://studymoose.com/girls-and-boys-playing-sport-together-essay 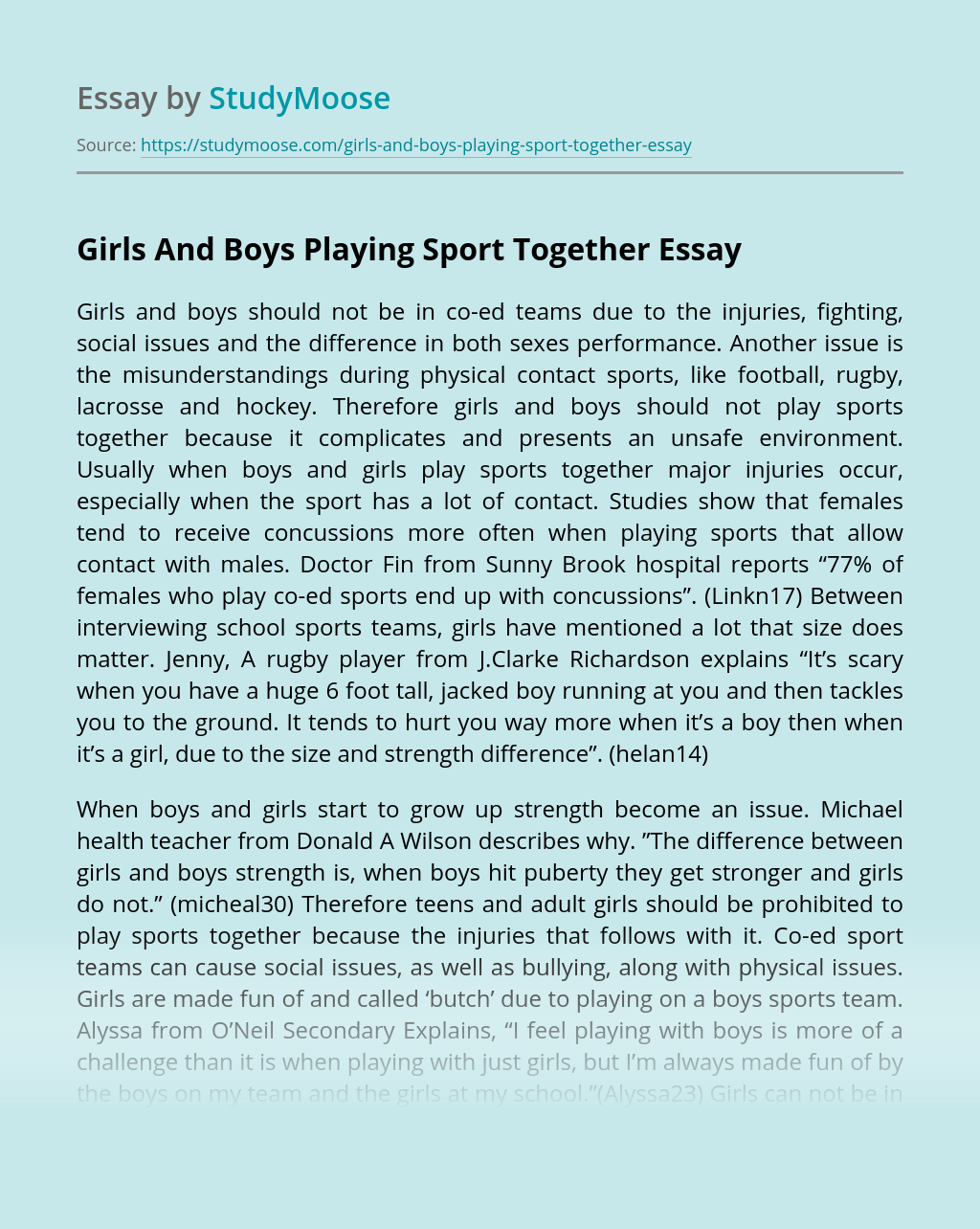