For my movie review I watched Girl Interrupted filmed in 1999 and directed by James Mangold. This is a movie that tells a story about a woman’s stay in the 1960’s on a psychiatric floor in Claymore hospital, after being suspected of suicide. The main character is a 19 year old female named Susana Kaysen who ate an entire bottle of aspirin and then drank a bottle of vodka. The doctor believes that Susana is suffering from Borderline Personality Disorder. Susan quickly finds herself making friends with everyone on the floor.

Turn in your highest-quality paper
Get a qualified writer to help you with
“ “Girl Interrupted” Movie Paper ”
Get high-quality paper
NEW! AI matching with writer

There are several characters with several different psychological diagnosis. Lisa is a sociopath who is very open sexually and very unfiltered. Polly may suffer from schizophrenia and is a burn victim. Georgiana is Susana’s roommate and also a compulsive liar. Daisy is suspected of having an incestuous relationship with her father and also suffers from a compulsive eating disorder. The ultimate goal for all these woman is to be treated and released from the facility.

Others however such as Lisa believe they are lifers or never going to get out. Cognition is how people remember, think, speak and solve problems. The cognitive process is that of obtaining and using new knowledge.

Everyone handles this every day mental process differently. As I watched Girl Interrupted I noticed how Susana spoke about what makes a successful suicide. Susana is very detailed in her suicidal thoughts and has attempted suicide in the past. Borderline Personality Disorder is a disorder that affects the cognitive areas of development.

Also Susana attaches to another patient by the name of Lisa with whom she has a love/hate relationship with.

Both the stages of cognitive and personality development follow closely as the same. Cognition is a person’s thoughts that are determined by emotions and behaviors, therefore making a personality. In Girl Interrupted, Susana cannot regulate her thoughts, emotions or behaviors. This is where the Borderline Personality Disorder diagnosis comes from. According to Psych Central (2014) “(BPD) is a pervasive pattern of instability in interpersonal relationships, self-image and emotion.” Those with Borderline Personality Disorder are often very impulsive, and often demonstrate self-injurious behaviors. These behaviors can be suicide attempts, and even sexual behavior. Susana had an affair with her high school teacher and would stay in relationships with men because of the sex and the need to feel loved.

Environmental factors can impact everyone and their development differently based on what factors are present and what factors are absent. This is just as true as biological factors; both biological and environmental factors in unison can have a very big impact on our cognitive processes. A person from a lower economic class that also comes from a long family history of abuse this can impact a person’s cognitive process of the way they problem solve, or the relationships they have. This is as true as a person of a higher economic class; taking Lisa for example she is all over the psychological map. Lisa more than likely grew up in a low economic class with a parent or parents who drank and fought and may have even abused drugs. Due to the assumed lack of attention and guidance, Lisa knows about rules but doesn’t care to follow because of the lack of consequences.

Susanna on the other hand grew up in a higher economic class and it is assumed that her parents did not abuse drugs or alcohol. It would be safe to assume that Susanna was not paid much attention but was not given the chance for the expected life challenges either. When life got tough Susanna decided to attempt suicide. This is how she saw a way to solve her problems. Also the relationships she had that were based on sex and not love but she stayed in those relationships anyway.

We have all been blessed with the curse “I hope you have a child ten times worse than you.” Well evolution can be to blame for that. We contribute to our child’s personality through evolution, genetics and behavior. It can believed that successful behaviors are passed on through generations and unsuccessful behaviors are internalized into that specific generation. For example you possess a behavior to grow gardens and gather the food and sometimes can it or store it for fall and winter usage. We have all seen this in our grandparent’s homes. That would be an example of evolution. Or ever look at your children and think about how much they take after you or your significant other? This would be evolution and genetics, as we have a tendency to breed with others who possess our same evolutionary traits, such as eye color and immune system strength.

If you have ever raised or even babysat children you probably noticed that at a certain age they started to mimic your actions and words. Completely unaware that they are observing your behavior to use in their very own way and situations. The way we act while raising a child will impact their personality greatly. If the parent is overly aggressive and the parents argue and fight, that child will grow up to be aggressive. If both parents work together as a team that child will likely grow up to work strongly in a group and know the value of working as a team.

The parenting style and the environment that was provided can also influence self-efficacy. Susanna for example would have had a higher self-efficacy based on nurture. However, through peers and socialization or nature; Susanna’s self-efficacy lowered and affected her moods and emotions. This ultimately caused the suicide attempt. Watching movies to relax was all that it used to be until this assignment. This assignment has taken the movie experience to a whole new level. For now on I will pay attention more closely and try to pinpoint factors that attributed to their personality. I have never looked at the movie Girl Interrupted the way I do now. Actually I believe it’s safe to say that I understand this movie better than what I did before. 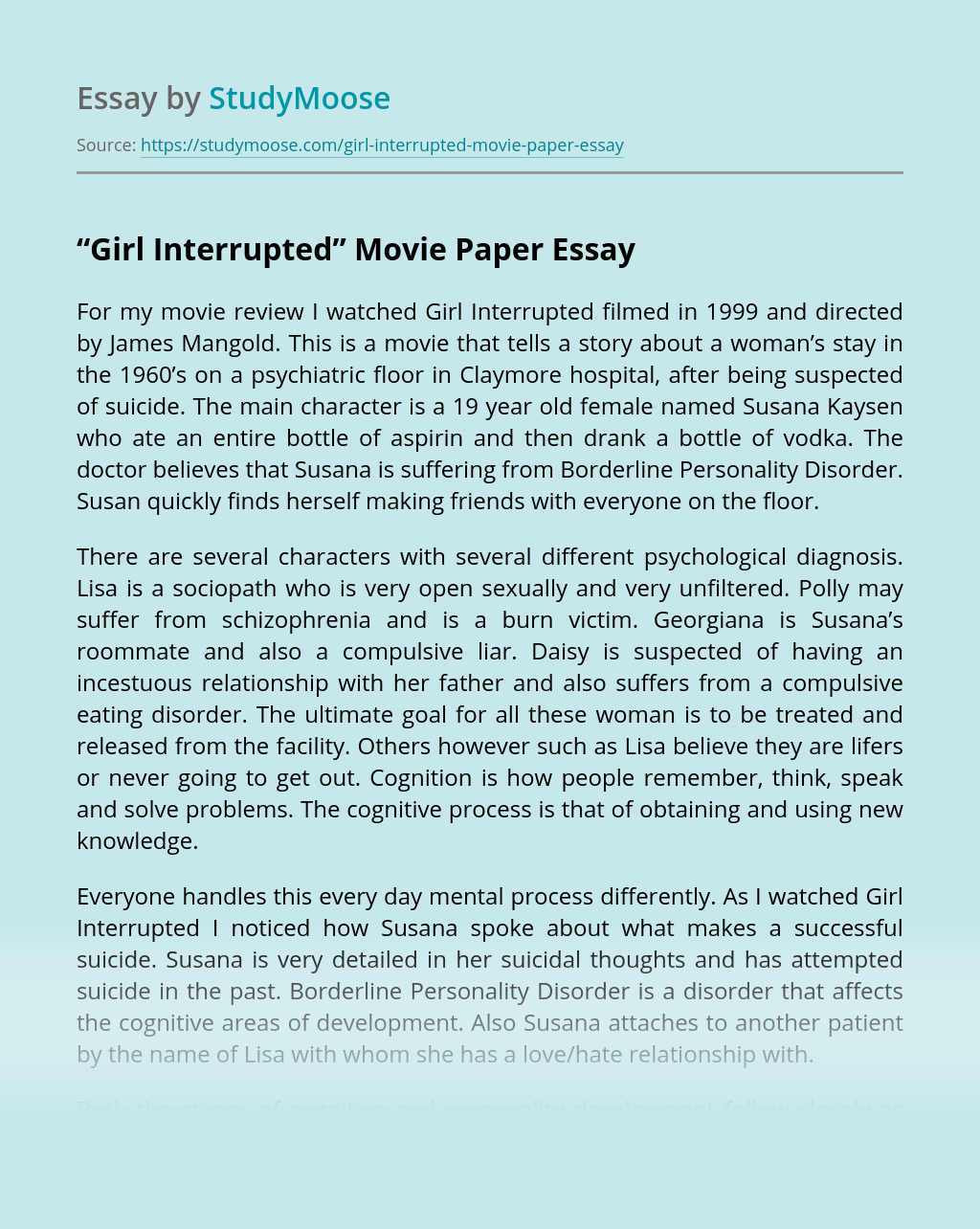 Turn in your highest-quality paper
Get a qualified writer to help you with
“ “Girl Interrupted” Movie Paper ”
Get high-quality paper
Helping students since 2015
Stay Safe, Stay Original