The following are the pool from which the three (3) questions on your Midterm Exam will be culled. As explained in the syllabus you are required to keep exam journals for the Gilgamesh, Persepolis and Hamlet readings, based on the separate questions listed on Blackboard for each text. You may use your Exam Journals together with your completed Freud Vocabulary when you take the Midterm Exam 1. Both Ophelia and Marjane experience bouts of deep depression.

In what ways are the conditions that contribute to their respective depressions similar and how do they differ? What, other than the difference in their temperaments, might account for each responded to her sorrows? What events led to each young woman’s depression?

What were the elements that helped Marjane recover that weren’t available to Ophelia?

2. Compare and contrast the friendship between Hamlet and Horatio to that of Gilgamesh and Enkidu. How did they meet and become friends? What roles do Enkidu & Horatio play in helping Gil & Ham achieve their goals? How do Enk & Hor help their friends perceive the supernatural? Who mourns and eulogizes whom in Gil & in Hamlet?
What might indicate that each relationship could have been homoerotic?

4. Which Freudian concepts might help explain the underlying psychological reasons why the reigning mullahs instituted such harsh restrictions on the status and behavior of women in Iran? Use the technical Freudian terms for the psychological resistances and why you think they apply

5. Both Marjane and Hamlet sense that “there is something rotten” with the governance and policies of their native countries. What are the similarities and differences between how they respond to those wrongs? What did Hamlet feel was rotten in Denmark? Marjane in Iran first under the Shah then under the Ayatollahs? How did each try to avoid dealing with those conditions?

How did each try to accommodate their behaviors to those conditions? What actions did each take to try and correct the wrongs they perceived?

6. Describe the advantages and challenges that Gilgamesh, Marjane and Hamlet each experienced as a result of living the dynamics of a “Dual Identity?” What ways might their experiences been similar and how did they differ What conditions drove each to assume a dual identity?

8. In Gilgamesh sex plays a civilizing function. Freud claims that our sexual urges constantly threaten civilization. What are the pros and cons of each position and can they be reconciled? After Shamhat has sex with Enkidu the animals reject him. In what ways does heterosexual coupling lead to greater civilization? In what ways does Freud indicate that our aggressive, sexual urges (Id) can subvert civilization? Are these 2 views mutually exclusive or can they be reconciled?

10. Based on the typology of Joseph Campbell, Lynne Milurn describes a typology of the Hero’s Journey. A. Apply her stages to the journey of: i. Gilgamesh & Enkidu’s from the poem’s beginning thru their journey to the Cedar Forest ii. Gilgamesh’s search for immortality

iii. Hamlet
B. In what ways do the aspects of Marjane’s journeys correspond and how do they deviate from Milum’s typology? Indicate those elements and characters of the Hero’s Journey present in Persepolis In what ways might they not follow the progression of stages that Milum details C. Can these same stages might be applied to the psycho-analytic (From the time one realizes the need to go to a therapist til one is cured) and or psycho-sexual developmental journey (from birth to adulthood) as described by Freud?

Gilgamesh, Persepolis and Hamlet: Exam Paper. (2016, May 28). Retrieved from https://studymoose.com/gilgamesh-persepolis-and-hamlet-exam-paper-essay 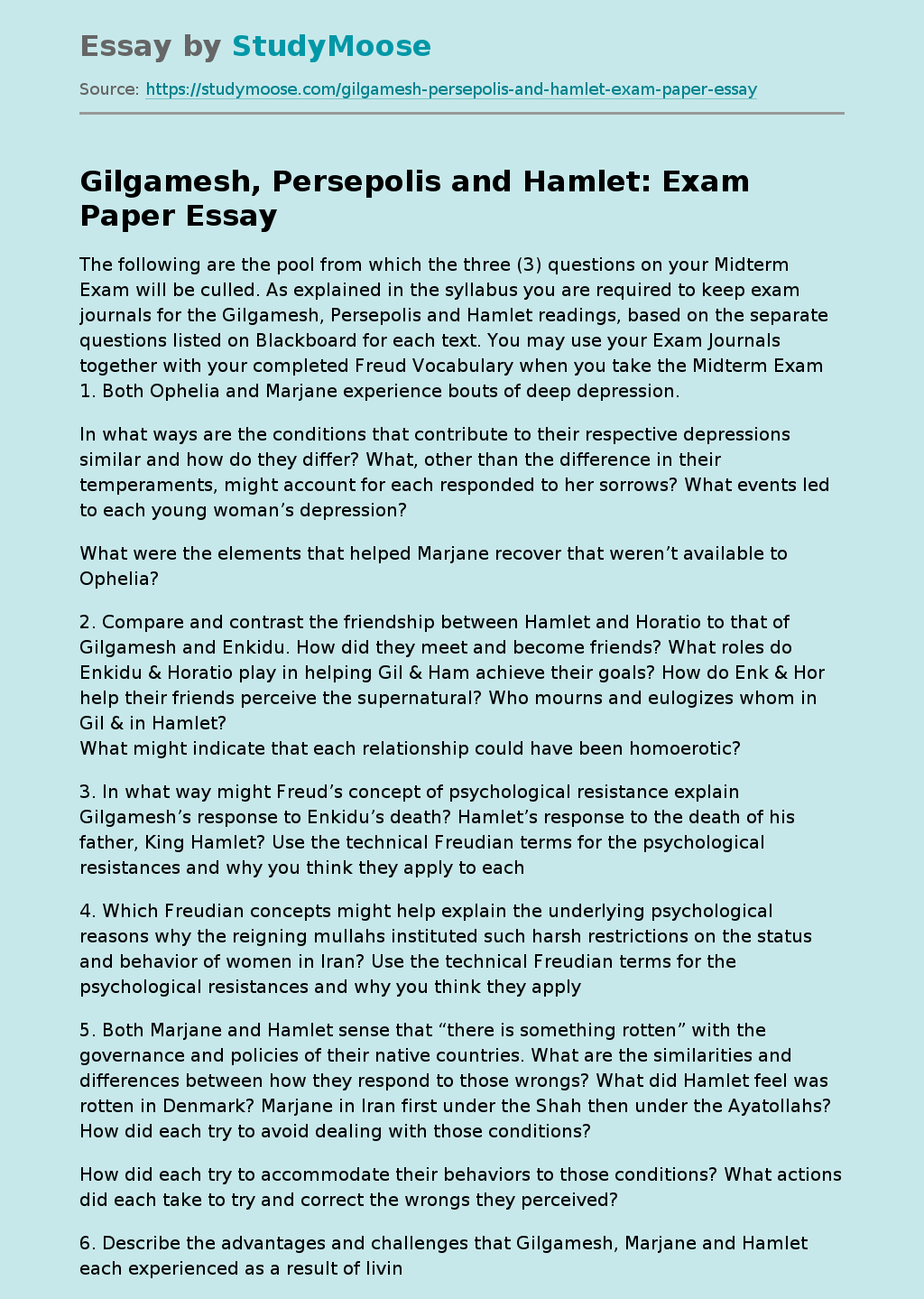