Gilgamesh: An Honest Hero for Humanity

In 1855 American poet Walt Whitman addresses the internal conflict of humanity, declaring “Very well then I contradict myself / (I am large, I contain multitudes).” Yet literature wrestles with this dilemma of dissonance far before Whitman enters the scene. In fact, over three thousand years prior, The Epic of Gilgamesh describes the adventures and trials of a hero who encompasses similar contradictions. Through the incomplete text of the epic, Gilgamesh struggles with the tension between wisdom and ignorance as his character develops—relationally, experientially, and emotionally—and this tension forces the reader to examine one’s own inconsistencies.

Don't use plagiarized sources. Get your custom essay on
“ Gilgamesh: An Honest Hero for Humanity ”
Get custom paper
NEW! smart matching with writer

The text reveals multiple dichotomies—civilization vs. Nature, male vs. female, supernatural beings vs. average humans—but one of the most distinct is the difference between wisdom and ignorance. Many characters lack basic knowledge and fall into a state of ignorance. For definitive purposes, wisdom is more than simple knowledge. It manifests as a deeper understanding, typically after the character experiences something that demands change.

For example, when Enkidu tries to exist in the wilderness after the week of ecstasy with the harlot, he is “diminished. . . But he drew himself up, for his understanding had broadened.” Gilgamesh, as the character undergoing the most change, is expected to acquire the greatest wisdom. The conflict created by that expectation drives the epic forward and provides a lens to analyze his growth.

The first influences on Gilgamesh are his relationships. In the broadest sense of the word, he has a relationship with the people he governs. They praise him, dawning labels of “mighty protector, protector of his people”, and he rewards them with oppression.

He abuses his role as king, taking the women as sexual objects and challenging the men to physical contests. If he was a wise ruler, he would not behave in this manner because it undermines his political legitimacy. These interactions demonstrate how much he must learn before he can truly embody the acclamations mentioned in the beginning of the text. This transformation must be accomplished with closer bonds.

His mother, Queen Nishun, is a confidant and advice-giver for Gilgamesh. Her characterization as the “wise, the all-knowing” starkly contrasts the naïve Gilgamesh of the first tablet. He approaches her to interpret the first dream mentioned in the text. She explains that he will encounter “a mighty man, a comrade who saves his friend”, and he trusts her prediction. This is first time wisdom is conveyed to Gilgamesh.

Enkidu is the foreseen comrade, who starts as an adversary and becomes a best friend. This relationship is the most formative on Gilgamesh and determines his trajectory for the rest of the epic. Yet in some instances, Enkidu purposely keeps Gilgamesh in ignorance. As equals, it seems that the two of them cannot simultaneously act in wisdom. When they were preparing for their trip to the Cedar Forest, Gilgamesh disregarded the warnings of Enkidu and the Elders.

Then they switch roles. Gilgamesh becomes fearful, sharing his cautionary nightmares with Enkidu, who in turn manipulates the meanings to continue their hunt. He then deliberately ignores the consequences of killing Humbaba and urges Gilgamesh to continue, despite his doubts. As the texts alternates between demonstrating wisdom and ignorance, so do the central characters on the adventure.

The personal connections built throughout the epic impact the way Gilgamesh reacts to later situations. Previously, he indulged in exclusively self-gratifying endeavors without regard for anyone’s opinion. Now, his motivation comes from a more vulnerable place, and he must humble himself to find the answers he desires. His journey through the wilderness brings him into contact with new characters; Gilgamesh surprises them with his lowly appearance and pleas for help. It is only after losing his best friend that he turns to others for advice, rather than praise and tacit approval.

However, ignorance and pride are still his folly. When the Scorpion-Being warns him of the “treacherous” passage ahead, he insists. When Siduri, the tavern-keeper, offers similar disclaimers of the coming dangers, Gilgamesh continues. He persists in his belligerence, destroying “the stone things” then demanding Urshanabi deliver him across the Waters of Death. Finally he reaches Utnapishtim and is given ultimate insight on “Death and Life”—what he claims to be searching for—and still, he needs more. Though he has new knowledge of his mortality, he claims to Utnapishtim that he can complete his challenge to earn eternal life. He cannot. Gilgamesh is quickly overcome by his human limitations. This shows that having knowledge and acting on it are two separate feats. His first quest was about showing his strength and achieving fame. This second one, inspired by his grief and fear, is a quest for answers to bigger questions. Even though he fails, that revolution is enough to prove his progress.

The greatest development did not come to fruition in his relationships alone or even through his experiences, but in the depth of his emotions. It is only after feeling real love and loss that he can recognize his faults and grapple with his failures. After the death of Enkidu, he acknowledges his grief and fear, exclaiming: “I am going to die! —am I not like Enkidu? Deep sadness penetrates my core, I fear death, and now roam the wilderness”. Previously, Gilgamesh would have depended on his godlike characteristics of beauty and strength to cover up his humanness. In his grief, Gilgamesh shows a reversal of that tendency. The most emotive response of the epic is the thrice repeated passage of mourning: “Should my cheeks not be emaciated? Should my heart not be wretched…the issue of Enkidu, my friend, oppresses me…Am I not like him? Will I lie down, never to get up again?” This can seem needlessly repetitious, but it functions as an internal dialogue for Gilgamesh. Through this, he comes to terms with his own impermanence. In his moments of self-awareness and pain, he is the most human and the gains the most wisdom. That is why he can come back to Uruk, empty-handed and mortal, and be venerated as “He who has seen everything…saw the Secret, discovered the Hidden.” The perceived ending for Gilgamesh connects us back to the beginning, and it indicates his continual growth in the unfinished sections of the epic.

As modern readers, it is easy to project our assumptions onto the ancient texts. We are conditioned to look for a hero who overcomes an impossible feat, learns something, and remains a “good” person the whole time. The entire epic is a battle between wisdom and ignorance, and we expect there to be a clear winner in the end. But the text is not complete, and neither is the battle. The incompleteness of the texts demands that we confront the absences. We must be willing to accept that as long as the text is undiscovered, so is the clear answer to our questions—and that is a more honest reflection of humanity. What we learn from Gilgamesh (and have reinforced by Whitman) is that the self is an ever-evolving pursuit. All our friendships, experiences, and emotions will challenge and influence the person we think we are, and that is okay. If the oldest recorded story in the world is still changing, it makes sense that we are too.

Gilgamesh: An Honest Hero for Humanity. (2021, Apr 06). Retrieved from https://studymoose.com/gilgamesh-an-honest-hero-for-humanity-essay 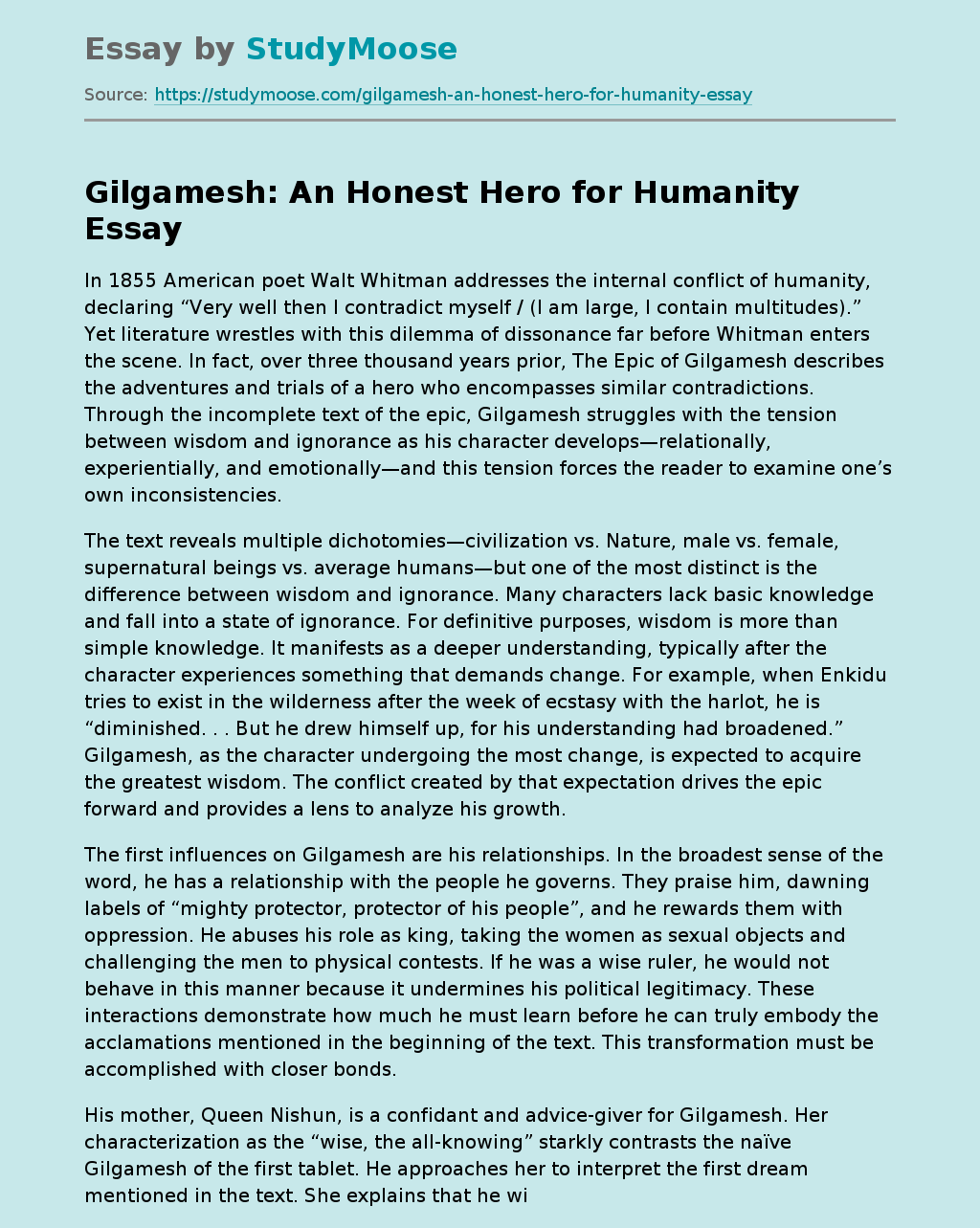