Gertrude to the Conjuror

However she had promised and must direct Gertrude to the Conjuror. After a long walk into the heart of Egdon-Heath, the village where the old man lives, Rhoda and Gertrude arrive at the house of the wizard. He examines her arm and says “Medicine can’t cure it, tis the work of an enemy”. He also says he can show her who the enemy is. He brought a tumbler from the dresser, almost filled it with water, fetched an egg, prepared it in some secret way and then broke it on the edge of the glass, so that the white went in and the yolk remained.

Don't use plagiarized sources. Get your custom essay on
“ Gertrude to the Conjuror ”
Get custom paper
NEW! smart matching with writer

As it was getting murky, he took the glass and its remnants to the window, and told Gertrude to watch them carefully. They leaned over the table together, and the milk woman could see the shade of the egg-fluid changing form as it descended into water. On the walk back Rhoda asked Gertrude what she saw, she replied “Nothing I care to speak of.

” This made Rhoda think the worst that Mrs Lodge had seen Rhoda’s face in that egg yolk and sure enough that spring Rhoda Brook and her boy disappeared from their village. Six years passed and the Lodge’s marriage had drifted from happiness into despair.

The once blissful Gertrude had become an irritable, irrational woman whose spare moments were spent experimenting on her arm with every foolish remedy she could come across. What’s more Mrs Lodge had brought her husband no son and every day Mr Lodge thought more about his son which had disappeared with his mother.

After trying hundreds of medicines she still hadn’t visited Conjuror Trendle since the day she had found out that her ailment had been caused by Rhoda by some means. In a last effort to cure her suffering Gertrude decided to visit Conjuror Trendle for one last time.

When she asked him to help her heal her arm he asked her what remedies she had tried. Gertrude listed just a few of the hundred counter spells and enchantments. He approved of some, saying they would have worked on minor wounds but not on this. She pleaded with him, begging for him to help her to remove this curse from her. He did though say he knew one way in which she could lose her disfigurement but it would be difficult to carry out. She must touch a hung man’s neck with her arm and it must be done whilst the dead man’s blood is still warm.

A while passed and soon Gertrude found herself praying every night for a guilty or innocent man to be hung! Finally in July there was to be a hanging, just one, for arson. She knew to be able to get close enough to the dead body she must talk to the hangman and persuade him to let her fulfil this spell. So she found where the hangman lived and requested that he could let her get close enough to the body to touch it. He agreed and told her to be waiting underneath the gallows. The next day Gertrude was waiting punctually where she was told to wait.

The time arrived where she had to emerge from beneath the gallows and touch the newly hung man. She walked over to where the dead man lay and placed her wounded arm across his neck and she cried out “the turn o’ the blood”. A woman shrieked in the crowd which caused Gertrude to turn round and there stood before her was Rhoda Brook. Rhoda was weeping and her eyes were red, behind her stood Farmer Lodge. Rhoda grabbed Gertrude. Gertrude slid down the wall, lying unconscious next to her husband’s feet. Gertrude had put two and two together and realised that the dead man was Farmer Lodge’s and Rhoda’s son.

Her delicate condition, weakened maybe by the arm, gave way under the blow that followed the physical and mental pressure which she had subjected herself to. Gertrude didn’t make it home alive. Farmer Lodge soon sold his farm and moved to Port Bredy at the other end of the county. He was first occupied with grouchiness and sorrow but soon became a disciplined and considerate man. He died two years later and it was soon found out that he had left a large amount of his land to a reformatory for boys. Rhoda, after a while, returned to her milk woman post and stayed there for many years.

Gertrude to the Conjuror. (2020, Jun 02). Retrieved from http://studymoose.com/gertrude-to-the-conjuror-8446-new-essay 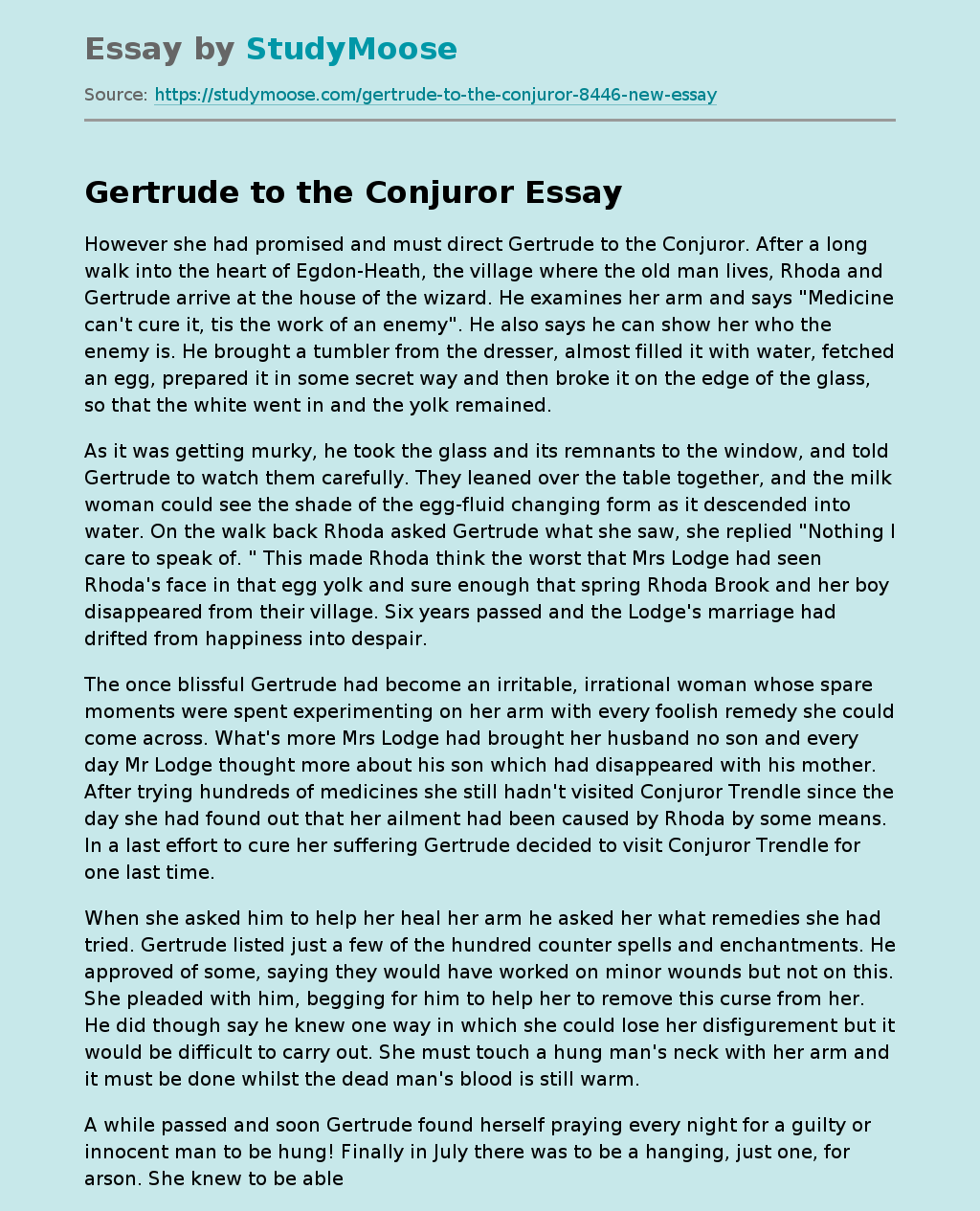