This play was set in 1912 but wasn’t actually performed on staged until 1945. The main characters are the Birling family, which consisted of Arthur Birling, Sheila Birling, Sybil Birling, and Eric Birling. There were also other characters such as Eva Smith otherwise known as Daisy Renton, Gerald Croft and Inspector Goole. At the beginning the Birlings are holding a family dinner party as they are celebrating the Engagement of their daughter Sheila Birling to Mr. Gerald Croft, who has a wealthy and very important family.

Don't use plagiarized sources. Get your custom essay on
“ Gerald Croft and Inspector Goole ”
Get custom paper
NEW! smart matching with writer

While they are celebrating the inspector arrives who is investigating the suicide of a young working-class woman. He slowly examines every member of the Birling family and the goes on to examine Gerald Croft too. Under all of the pressure of the inspector’s interrogation it turns out that every member of the Birling family including Gerald have all had something to do with the death of the young victim.

The author of this play J.

B Priestley wrote this play to convey his very crucial and important message about society and how every one needs to work together collectively in today’s society. The play also shows how the workers and the factory owners had conflict this was because there was a social divide, this was caused by factory owners making workers work long and unsocial hours for very poor wages so this ended up in an industrial revolution. J.B Priestley also believed that the idea if everyone worked together then society would be a lot stronger and there would be fewer arguments.

Mr. Birling plays a big part in this play, as he is one of the main characters. Mr. Birling is a prosperous factory owner who’s one and only priority is to make money for him and his family. He is pleased when his daughter Sheila Birling gets engaged to Gerald Croft because he thinks this is a wonderful chance for him to invest and build up his business which Gerald Croft’s fathers help and support. He also likes the idea of having several business links with Gerald’s wealthy family and their large business as he looks upon this as a huge chance to make more money! He can be very dishonest and also very selfish at times. One reason for his attitude towards people in a lower class of society is because he is a lord mayor and is on the honours list for getting a knighthood so he thinks very highly of himself. He is very narrow minded and optimistic about the future.

J.B Priestley uses dramatic irony so that the audience know more then the characters do for example when Birling mentions the first world war and the sinking of the titanic, the audience know these two things have already happened but in the time the play was set they had only ever been spoken about but had not yet actually occurred. Birling also takes no responsibility for others and is a symbol of greed and the selfishness of all industrialists during this time. J.B Priestley uses Birling in this way to show just how working-class people were treated in the time the play was set. One thing, which Mr. Birling is very afraid of, is a public scandal and this is because of the reason that if any thing bad is said about his business then he will suffer badly and his business may even go bust so he is worried because of any thing along the lines of a public scandal occurring.

Sheila Birling is the daughter of Mr. Arthur Birling and she also plays a large part in this play, as she is also one of the main characters. Sheila is a young and attractive typical rich girl. Sheila is a very selfish person even though at times she does not mean to be. Sheila is often very honest and even after they find out that the inspector was not real Sheila still feels guilty and learns from her mistakes.

Sheila is a symbol of the younger generation and is very level headed where as Mr. Birling is very hard headed! Sheila is very pleased with life and becomes very effected after the inquest of the inspector. You can tell Sheila is affected by her actions and the way she speak. One of her quotes, which shows this is “I will never, never do it again!” This shows that she is really sorry for what she has done and will not do it again. We can also tell in a way she was jealous of Eva smith because she says “I caught sight of this girl smiling at Miss. Francis…. and I was absolutely frantic!” So we can see by this that Sheila is not just angry with Eva Smith, but that she was also jealous of her by the way in which Sheila reacts to something so insignificant to this.

This shows that she always wants things to go her won way and if she doesn’t get what she wants then she will cause a scene and will get very vicious! As a result of what Eva did Sheila threatened to close down her account at Millwards, which means a lot to the manager as the Birling family are very rich and valued customers so the manager has no choice but to fire Eva smith despite the fact that she has done nothing wrong!

Sheila and Arthur are very contracting and contradicting characters. We can see how they are different because Sheila is a symbol of the younger generation where as Birling is a symbol of the older generation. Sheila is more liable to accept when she is wrong and accept her responsibilities in life, but Mr. Birling will never accept his mistakes and if he thinks he is right then no one can prove him wrong.

If I were staging Sheila and Arthur’s character then I would place Mr. Birling in the middle of the stage towards the front with the bright spot lights shining up on him to make him appear a lot bigger then he really is to give the audience the effect of him being big and having a lot of power. I would then stage Sheila in a corner with very little light shining down on her to make her appear smaller then she really is to give the audience the effect of Sheila being small and petite! I would change their voices as well to make them change the way they act. I would make Mr. Birling have a piercing and daunting voice to give the effect her was powerful and very noble.

I would then make Sheila have a very gentle and egotistic voice to give the effect she is shy but on the other hand very self-centered! I would dress Birling in a very posh and high classy suit with a pair of smart trousers, a dinner jacket, a waistcoat, a bow tie, and a tail on his suit jacket to show he has a lot of money and is very well groomed! I would then dress Sheila in a cream silk evening gown with long silk gloves to show she too had a lot of money but on the other hand didn’t like to over dress for any occasion! 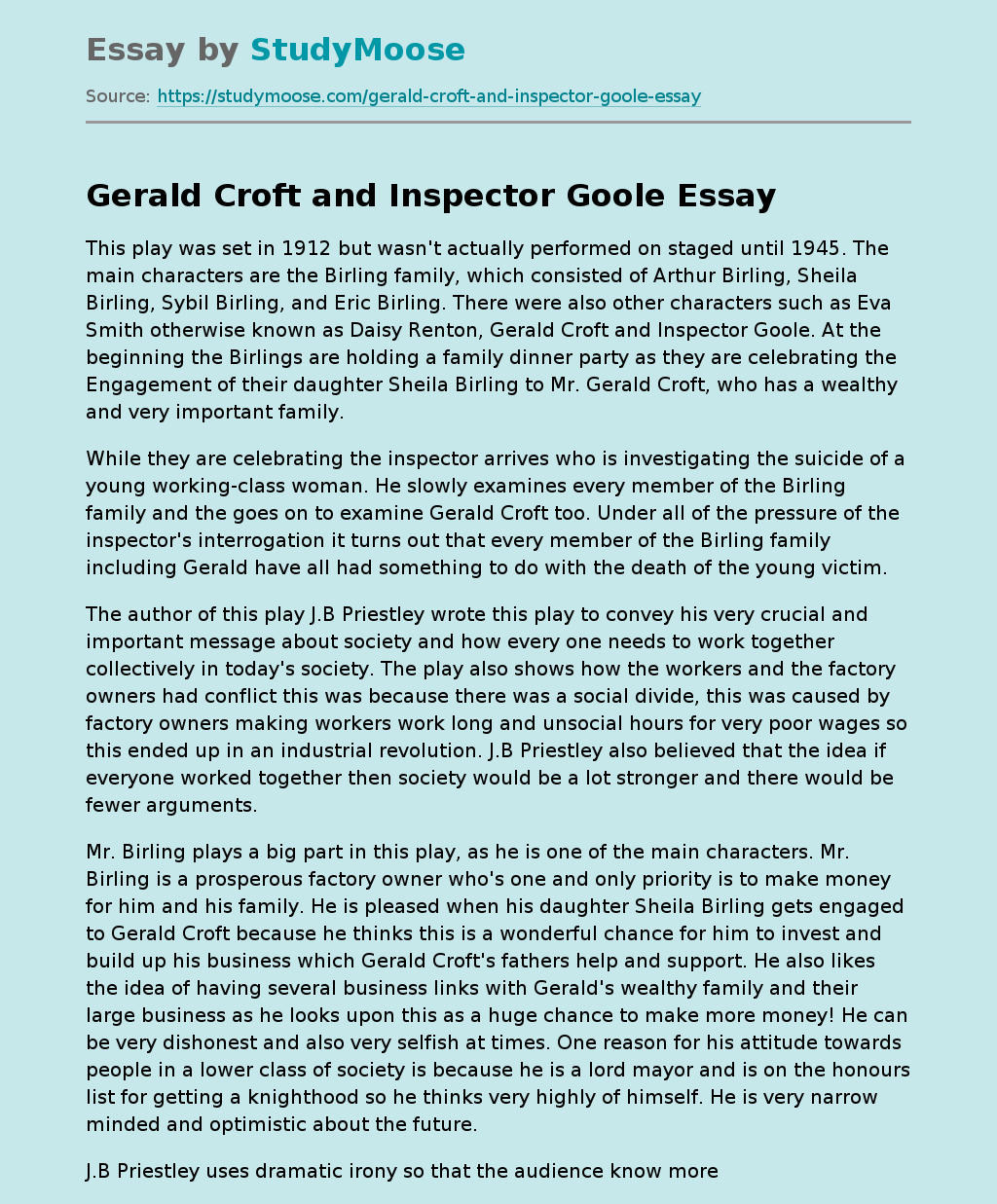