Eric is nervous and very tense

When Eric comes in and Gerald and Birling are laughing. Eric thinks they were laughing about him and he’s very tense and paranoid. He is already uneasy because he hopes no one finds out he got a woman pregnant and left her. Preistley shows this by having Eric drinking some decanter and changing the subject so he knows they aren’t talking about him. “I left ’em talking about clothes again. You’d think a girl had never had any clothes before she’s got married.

Don't use plagiarized sources. Get your custom essay on
“ “An Inspector Calls” by John Boynton Priestley ”
Get custom paper
NEW! smart matching with writer

Women are potty about ’em.”

Eric is nervous and very tense which makes Birling and Gerald tense thinking why does he care so much about women and there clothes or has he just had to much to drink. Eric says “Yes I remember” but he suddenly stops realising he shouldn’t of said that and he’s had a bit to much to drink. Gerald and Birling are realising something’s definitely a bit odd with Eric.

In an amused way Gerald says, “Sounds a bit fishy to me. ” The audience realise Eric is keeping something secret from the family. The doorbell rings when Birling is saying capitalism is the correct way to live.

Gerald and Birling joke about Eric

He starts saying “A man has to mind his own business and look after himself and his own – and” The sharp ring of the front door sounds and makes the atmosphere even more tense by wanting to know whose at the door and what was Birling about to say.

Birling was interrupted to create tension in the family. The person who rang the door was a police inspector and whilst Edna goes to let him in. Gerald and Birling joke about Eric doing something and he gets very paranoid. Gerald says, “Unless Eric’s been up to something” nodding to Birling ” That would be awkward, wouldn’t it? ” Birling say’s “Very” in a humorous way.

Then Eric say’s “Here what do you mean? ” Eric is much more tense knowing an inspectors come and Birling and Gerald sounding as if they know something. Eric being on edge and him being annoyed with Birling and Gerald creates tension. Eric wants to know if they know anything about the girl and what they were talking and laughing about before he entered. The inspector creates tension by staring at the characters first before saying something, which makes you feel uneasy “He speaks carefully, weightily and has a disconcerting habit of looking hard at the person he addresses before actually speaking.”

The inspector is trying to read the persons mind

The inspector is sort of trying to read the persons mind from their facial expressions and he makes the person he’s looking at worried and frightened. The inspector and Birling speak to each other using only short sentences. This creates tension by showing that they are angry at each other using quick short sentences that will stick in the audience’s head. The inspector comes in and says “Mr Birling? ” and Birling replies “Yes. Sit down, inspector. ” Inspector says sharply “thank you, sir” etc.

They use short sentences trying to prove each of them and genuine. They try to thrive over the other. There’s tension between them because Birling is trying to prove there’s no reason for the inspector to be at their house. Birling tries to say he has nothing to do with her because he was a lord mayor so he’s saying why would he have anything to do with her. “I was an alderman for years – and lord mayor two years ago – and I’m still on the bench. ” Birling is trying to show off and that he sticks on the correct side of the law by saying he knows people.

The photo of Eva Smith

Birling says, “But I don’t understand why you should come here, inspector -” and the inspector cutting through massively says “I’ve been around to the room she had. ” This would annoy Birling but he just forgets about it. Audience are surprised that Birling doesn’t reply when the inspector interrupts. The inspector creates a lot of tension when he show’s Birling a photo of Eva Smith but blocks Gerald and Eric from seeing it. ” Both Gerald and Eric rise to have a look at the photograph, but the inspector interposes himself between them and the photograph. They are surprised and rather annoyed.

Birling stares hard, and with recognition, at the photograph. ” The audience wants know if he’s got a special reason for making sure Gerald or Eric don’t get to look at the photo. This could be because they know who the girl is and could have something to do with the suicide. By blocking them from sight of the photo tension is created between the inspector and Gerald and Eric. The inspector puts the photograph back into his pocket when only Birling has had a look. Gerald says showing annoyance ” Any particular reason why I shouldn’t see this girl’s photograph, inspector?”

But the inspector just stays calm not caring that he’s annoyed and looks hard at him and just says, ” there might be” Priestley uses just a short sentence so it sticks in the audiences head and that he does have something to do with the girl but he isn’t going to say yet, creating a sense of mystery. The inspector believes in socialism and shows this when he says “Because what happened to her then may have determined what happened afterwards, and what happened to her afterwards may have driven her to suicide. A chain of events.”

The inspector is saying what we do can effect others to do something so it is partly Birling fault she committed suicide. Birling says, ” Still, I can’t except any responsibility. If we were all responsible for everything that happened to everybody we’d had anything to do with, it would be very awkward, wouldn’t it? ” Birling is now saying socialism doesn’t work and that everyone should look after just himself or herself. So the inspector and Birling have conflict of ideas creating tension. The inspector just says “very awkward” showing he doesn’t care what he says and that he’s going to get in trouble for her suicide anyway.

Eric starts being confident and aggressive

Eric is very drunk from the port and he starts being confident and aggressive at his dad instead of being shy. Eric says something, which displeases his dad “Why shouldn’t they try for higher wages? We try for the highest possible prices. And I don’t see why she should have been sacked”. Eric shows he doesn’t feel his father’s method of business isn’t fair and he doesn’t want to be like Birling when he’s older. Birling gets very angry with his son for disagreeing with him when Birling thinks he’s always correct.

Birling replies to Eric rather angrily “Unless you brighten your ideas you’ll never be in a position to let anybody stay or to tell anybody to go. ” Birling sounds as if he’s disappointed in his son that he isn’t has strong as him and he thinks he won’t make a very good businessman. Sheila and Eric start telling Birling he’s wrong. Sheila says to Birling “But these girls aren’t cheap labour – they’re people. ” She doesn’t agree with her dad that they just are something to give him money and they have lives too. This shows she thinks capitalism is wrong.

When Sheila is told about the girl pouring disinfectant down her throat to end her own life partly because of her dad. Sheila is turned from being happy to absolutely horrified. Sheila says rather distressed “Sorry! It’s just that I can’t help thinking about this girl – destroying herself so horribly – and I’ve been so happy tonight. ” Sheila being completely cheerful and suddenly becoming totally horrified from what’s been said creates tension. Sheila can’t believe her dad could do such a thing but then she is angry with her dad and feels he is self-interested. 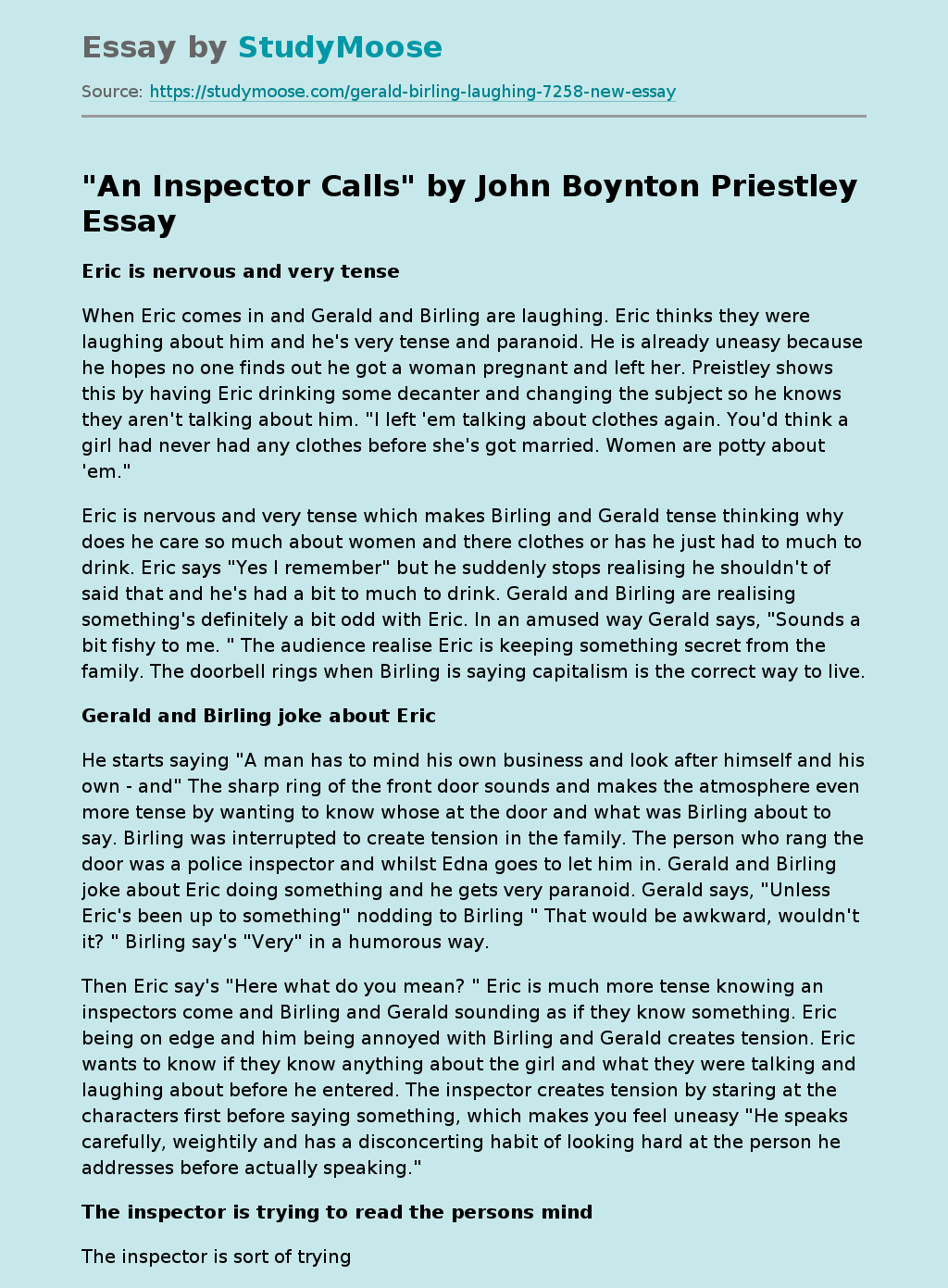