George Washington’s farewell letter, it is almost impossible for me to choose his most important piece of advice. His points seem almost haunting while reading them with our country in its present condition. Washington had such foresight and wisdom. The sad reality is that we as a country have so strayed from his advice. He made multiple points that I think are vastly important. Washington warned against political parties. He pointed out that they only cause disagreements and disunity among the people.

Don't use plagiarized sources. Get your custom essay on
“ George Washington’s Advice to the American People ”
Get custom paper
NEW! smart matching with writer

Instead of Americans being one unified people, we have become defined by our political party. Republicans and democrats are in constant struggle over views and agendas. Washington warned us to flee from these and hold fast to unity. Washington also emphasized the importance of religion and morality. He held tightly to the belief that a person’s spiritual life had effects on one’s decisions in everyday life. With morality as the heart of an issue, people are more likely to treat each other fairly and be unified in spirit.

One of the most outstanding pieces of advice from our first president sends chills down my spine. Washington encouraged sparing use of credit. He did not believe we as a nation should be in debt to anyone, which is also Biblical. He warned us to take heed of falling into debt. This is great advice that has so obviously been forgotten it is maddening. Our country is currently 16 trillion dollars in debt. We spend more than we take in, and we are putting our future in the hands of government of foreign lands.

This reality speaks wholeheartedly to Washington’s next piece of advice.

The last two pieces of advice I believe go hand in hand. Washington spelled out plainly that we did not want to be overly involved with other nations; in fact, he discouraged permanent alliances with any foreign nation. By doing so, we put our national security at possible risk. In regards to national security, Washington believed that we should have a strong military force. Being in the military, Washington understood to need for men purposed to fight for our freedom. This is yet another issue we face today with our current president wishing to downsize our military.

I truly believe if we will begin to follow Washington’s advice, at least in part, we can improve the future of our country. Lastly, I believe Washington encouraged unity in almost every point he made. He was passionate for our country, for our freedom, for our future. In his farewell address he stated that at the mere thought of the honor and privilege of being an American, the spirit of patriotism should unite us all to action. The pride of being an American should link us like no other nation before or since. 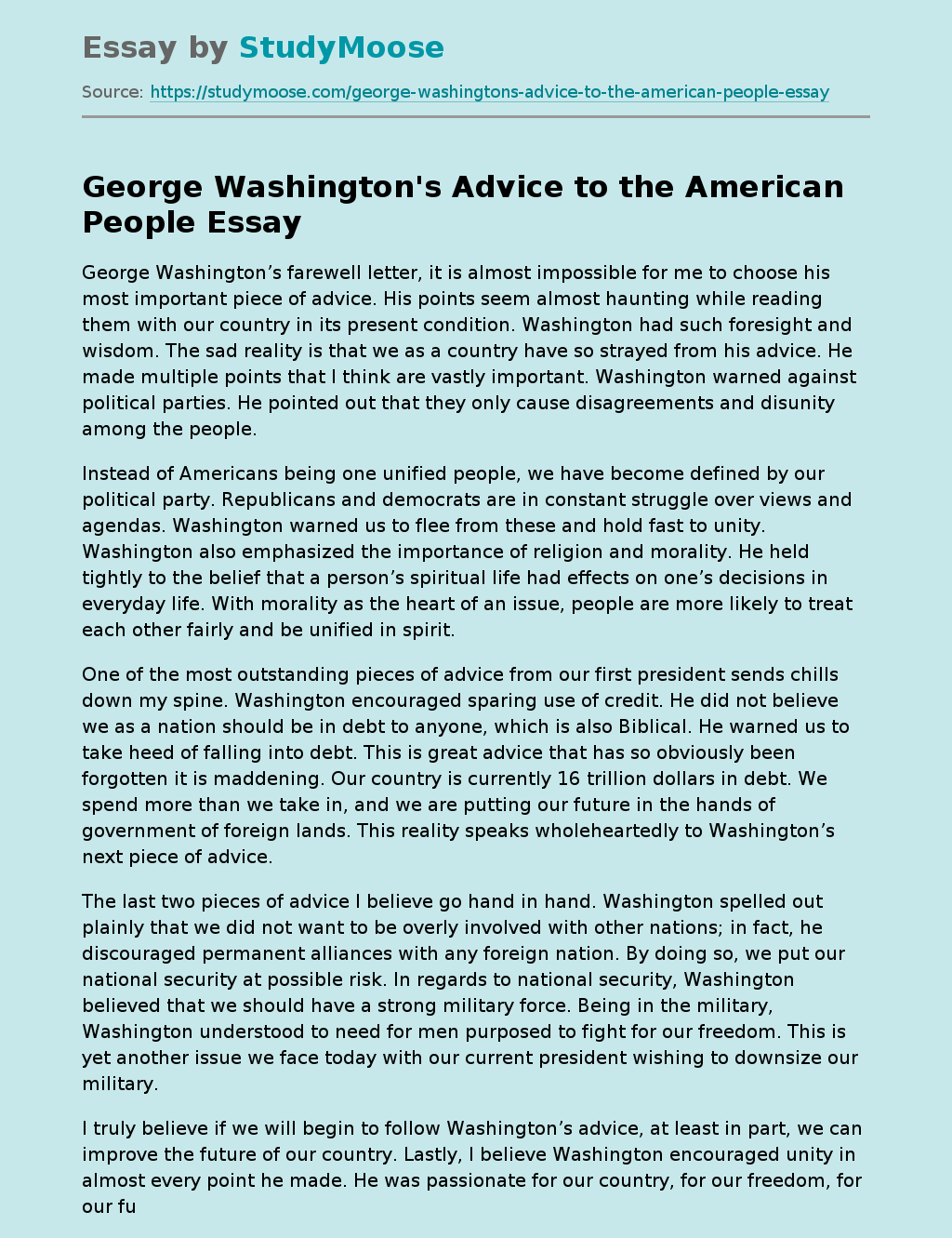