George Washington and His Impacts

Every great president has their own challenges to overcome during their time in the Oval Office. Some deal with country-shaping wars. Others contend with domestic issues, but not all of them face obstacles such as putting down powerful rebellions, proclaiming neutrality, or establishing the forever capital. George Washington faced these mountains and more. George Washington’s presidency was one that set America on the path towards becoming a great and powerful nation with the Whiskey Rebellion, Proclamation of Neutrality, and the establishment of the Capital.

Don't use plagiarized sources. Get your custom essay on
“ George Washington and His Impacts ”
Get custom paper
NEW! smart matching with writer

First, Washington had to quickly find a solution to the Whiskey Rebellion. Being such a young and generally weak country, the United States was financially unstable, so much that it posed a danger to its existence. Being the money-conscious politician he was, Alexander Hamilton, came up with an idea to assist America in leaving the red zone. He suggested implementing a tax on whiskey to fill the bank of the treasury.

When the Whiskey Tax Bill was passed in 1791, many Pennsylvanian farmers and distillers were absolutely outraged at this. They were shocked at the extra price they were required to pay for their cheap alcohol, considering the low amount of money they made. When tax collectors started coming town to town to pick up the whiskey taxes accumulated, some especially angry taxpayers would ambush them, tie them up, and strip them naked to humiliate them, as were the cases of Robert Johnson and John Connor. When George Washington heard about the stirrings of this uprising rebellion, he led a militia of 12,000 to 13,000 soldiers to put it down before it grew any larger.

The Whiskey Rebellion, while a nuisance, led to several positive results. George Washington’s ability to take charge and lead this dire situation only furthered proved his supreme effectiveness as a commander and first president. More importantly, the federal government’s capability to put down a domestic uprising proved the Constitution’s efficaciousness. With Shay’s Rebellion, the Articles of Confederation didn’t give the central government enough power to take control of the states, because it was the states that were in prime control of the country, leaving America very exposed. With the Constitution, the country could run smoothly and the federal government could better run and take care of the U.S.A.

Next, George Washington needed to address the Proclamation of Neutrality. Around 1793, the French Revolution was underway and France had already declared war on multiple surrounding European countries, including Great Britain. On April 8th, 1793, the acting French minister, Edmond Genet, flew into Charleston, South Carolina to ask American people to join in the revolutionary fight with France. While other people loved the man’s infectious energy, Washington was concerned about what Genet was doing, so he called his cabinet together to decide how to respond to this invasion. The cabinet members thought it a good idea to issue a Proclamation of Neutrality to keep the still weak and financially unstable U.S. from engaging with Britain, so the president went ahead and issued it with the warning that any American citizens who violated this would indeed be prosecuted.. This was met with dismay by the citizens of the U.S. for they felt sympathy toward France, our allies during our Revolutionary War. This act was tested when American, Gideon Henfield, captured a British ship and brought it to Philadelphia, the capital at the time. He was taken to court by the federal government, but was found innocent, because the jury felt like the Proclamation of Neutrality didn’t carry the weight of the law. When Genet finally crossed the line, he threatened to rally a rebellion against Washington. However, this news was leaked to the public, making people lose their support for Genet and instead turning to their president.

George Washington and His Impacts. (2021, Apr 06). Retrieved from https://studymoose.com/george-washington-and-his-impacts-essay 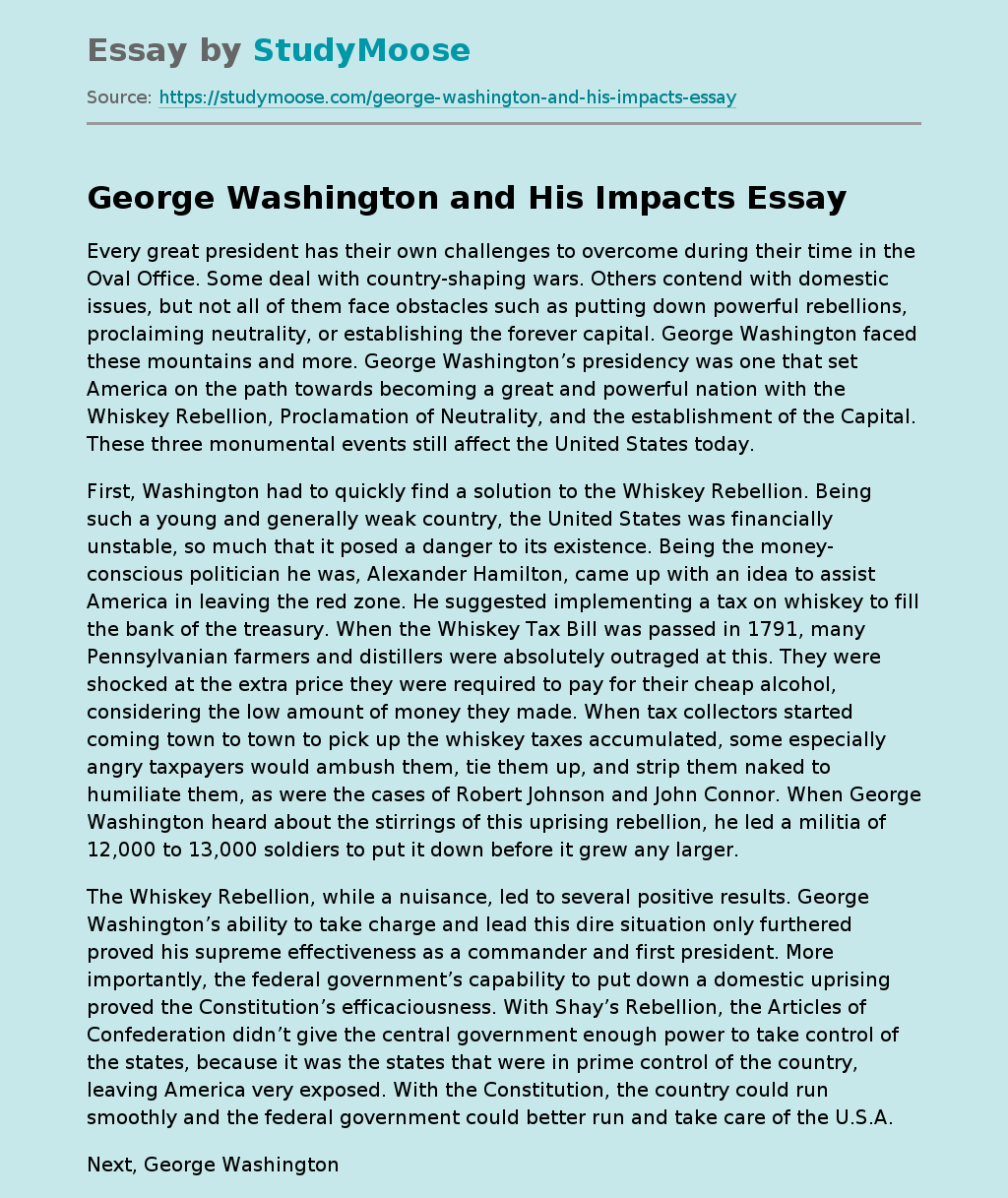