Barbara and George H. W. Bush are the parents of the 43rd president of the United Sates, George W. Bush. The two were married on January 6th, 1945 and it was said that they experienced love at first sight when meeting. George Bush Sr. was 17 when married, and Barbara was 16. The two have lived in 29 homes located in 17 cities, and is the first presidential couple to reach 60 years of marriage. Barbara’s background includes working a summer job sorting nuts and bolts during World War II as well as working at the Yale Coup while her husband was attending the college, and until her first child was born.

She is the second woman in history to have both a son and husband serve as president of the United States. George H. W. Bush served as the 41st president, as well as numerous other positions within our government. Some of these include vice-president to Ronald Reagan, director of the CIA, congressman, ambassador to the United Nations, and chairman of the Republican National Committee.

Besides these governmental positions he was also a pilot in the navy as well as an oil businessman in Texas. George Walker Bush was born on July 6, 1946 in New Haven, Connecticut.

He was the oldest of his five other siblings: Pauline (Robin), John Ellis (Jeb), Neil, Marvin, and Dorothy (Doro). George’s sister Robin died at the age of three from leukemia when George was only seven years old. His brother Jeb would also go on to become the 43rd governor of Florida.

In 1948, George Sr. and Barbara moved the family to Midland, Texas, where H. W. would make his fortune in the oil business. George attended private school in Massachusetts where he was a great athlete in baseball, football, and basketball.

He was good in school, but was also known for being a bit of a troublemaker. He went on to be accepted to Yale University where he was the president of the Delta Kappa Epsilon fraternity, played rugby, and was a member of the secretive Skull and Bones society. Two weeks before graduation George enlisted in the Texas National Guard. Although there is a lot of speculation as to whether or not he completely fulfilled his duty, he was honorably discharged in 1974. In 1977, Bush met Laura Welch and married her after only three months. The couple has two children together, twins Jenna and Barbara.

Family is huge to George, and he attributes Laura for stabilizing his life and helping him to give up alcohol in 1986. As for George W. Bush’s leadership style, many things through his life have affected how he chooses to lead. In 1978 he lost in an election for a House of Representatives seat in Texas, which helped him to humble himself and realize that things would not be given to him just because of his father. He helped with his father’s presidential campaign in the year 1988, and this helped him to learn the ins and outs of campaigns as well as doing the dirty work required of such a position.

After this, George bought a share of the Texas Rangers baseball team and served as managing general partner for five years, where he learned how a business works and runs. He became governor of Texas in 1995 and served until 2000, when he won the presidential election on the republican ticket. He served two terms as president, and dealt with disasters such as Hurricane Katrina and September 11th. George has been quoted speaking about Katrina saying, “Throughout the area hit by the hurricane, we will do what it takes, we will stay as long as it takes, go help citizens rebuild their communities and their lives”.

George W. Bush’s leadership style can be described as problem solver, delegator, decisive, visionary, and composed. He was a problem solver because he believed that getting problems solved right when they needed to be was key, and did not push them off until the next person came around to fix it. As for delegator, Bush was good at knowing when it was his place to get something done, or when he should let someone else take over the job for him. George was a decisive leader in that he made tough decisions throughout his presidency, but always did what he believed was best for our country.

Visionary is one way to describe his leadership style seeing as he had a clear vision set out at the beginning of his presidency for how he wanted our country to run, and this is something that he is known quite well for. Lastly, during Bush’s presidency he had to lead our country through two terrible incidents. Through all of this, he was able to maintain his composure and remain an effective leader through tough times, which shows his composure as a leader.

One of the things that George W. Bush is most well known for would be his speech that he gave at the sight of ground zero a few days after 9/11. I can hear you; the rest of the world hears you. And the people who knocked down these buildings will hear all of us soon. ” I believe that this quote from him helps to show all of the different leadership styles that he exhibited throughout his stint as governor of Texas as well as president of the United States. Nowadays, you can find George spending time with his wife Barbara on his ranch in Texas. He recently wrote his book, “Decision Points” and had a library put up in his name on the Southern Methodist University in the great state of Texas. 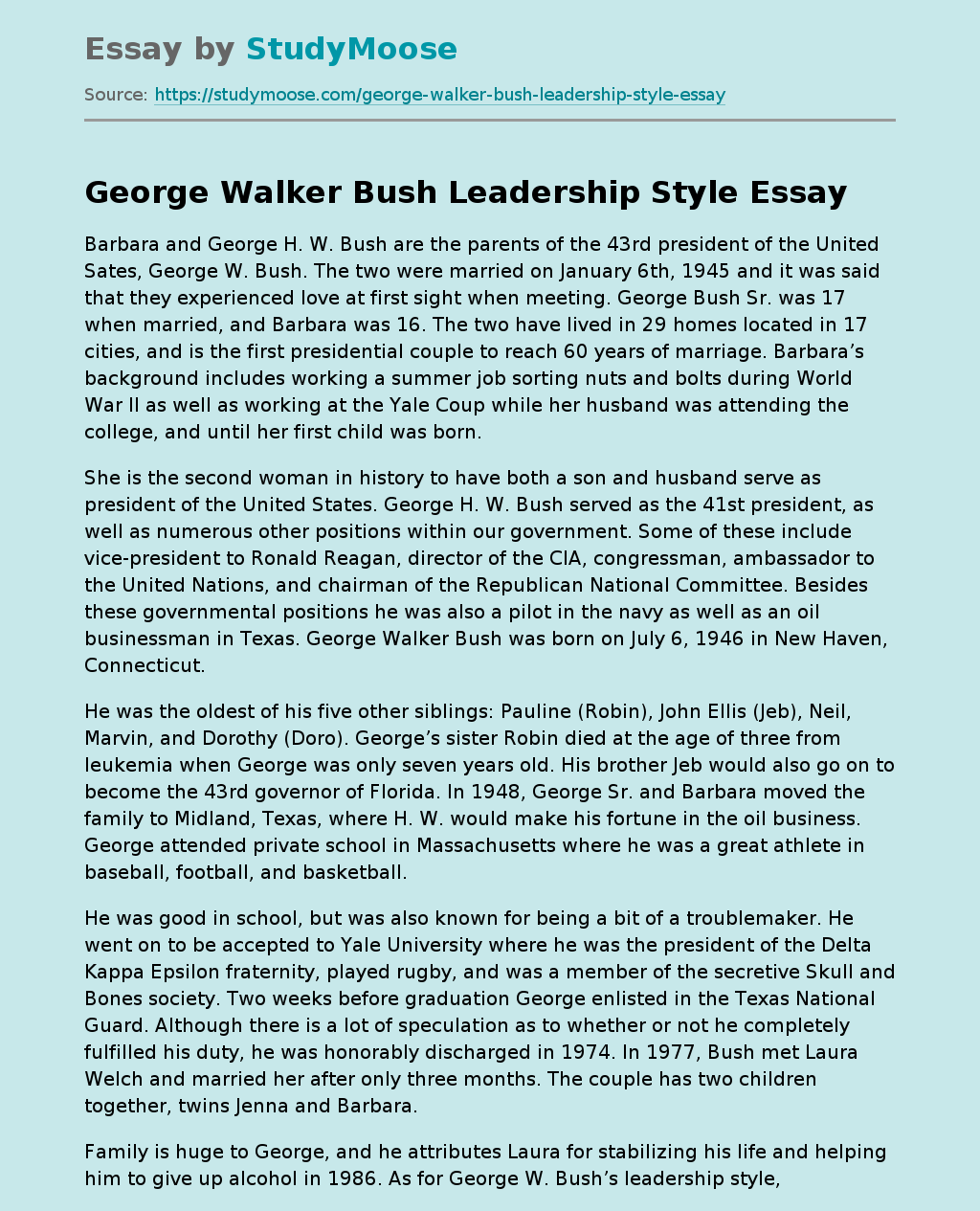