George Orwell’s 1984 is a novel which describes utter and total hate- hate of those who are different, hate of evil and hate of all other humans. It is where love is described as absurd, and totally unnecessary. People are bred to hate, and hate is the primary emotion that people feel. The lack of love and kindness is what brings the society to such a complete totalitarian state. Human beings instinctively crave love and care to thrive and without it no one can truly be happy or free.

This works well for 1984 because it is a hate driven society, but the lack of love causes unrest with those who can see the importance of love. By seeking out a relationship in this society it is a certain death sentence and no moral conviction or emotional loyalty is strong enough to withstand torture or betrayal. Physical pain and fear will always cause people to betray their convictions if doing so will end their suffering.

It is extremely important for the leaders of this society to control relationships and emotions; the society breeds hatred and disapproves of love in its citizens. There is no way to successfully rebel against this control as the Party surmises. The traitors against the Party belief that love is nonexistent “[imagine] that there is something called human nature which will. . .turn against [the Party]” (Part 3. Ch. 3, Pg. 282). Unfortunately, the Party has created human nature and it despises those who believe they can fight against their control. They utilize torture to suppress loyalties that attempt to surface between rebels.

The potential for loving relationships in this society is highly improbable, because of the oppressive rule and the fear of being found out by the Party bosses. The Party knows that love cannot bloom or should not because they govern emotions. It is accepted that “men are infinitely malleable.” (Part 3. Ch. 3, Pg. 282) and no one should be able to feel close to another. The Party allows people to get close perhaps, but then uses torture to have them betray each other- which is what will ultimately tear people apart. No one can allow themselves a relationship ruined by betrayal.

Not only does the Party make romantic loyalties a crime, it also creates loveless familial relations. Children in families do not show love or affection towards their parents. They are taught by the Party to spy on their mothers and fathers; to be miniature investigators for treason. The society has become one where “it was almost normal for people. . . to be frightened of their own children. (Part 1, Ch. 2, Pg. 27) The Party creates a system where children who betray their families are rewarded and so mothers cannot show any love towards their children without fearing treason- which would result in torture.

No family can be close to each other as families of the past- everyone has reason to be afraid of each other and worry that they may be turned in by their offspring. A family is not an organism strong enough to bond together without fear of conviction. The Party creates spies in youth, who are afraid of what will happen to them if they do not obey the Party. No longer do families create the rules and impose authority- it is the government that raises children, and families must become terrified of their own progeny.

The most important aspect of human nature is that people can bond with each other to create loving relationships. One must find someone to fight with, to rebel against the oppression but in this society any thought of love is shadowed by the knowledge that everyone could be able to betray everybody. The Party does not permit emotional attachment and threats of torture affix themselves to any relationship- if someone loves someone, might the object of their affection just as easily be a spy than a lover? No one can honestly maintain a relationship under the pressure of the Party. In the end, betrayal is the only way to go and it overcomes even the basic human instinct to seek out love. It ends up that eventually love does not conquer all and one can only love their saviour- even if they are Party commanders.

Romantic love is an ideal that cannot prevail because it is slowly bred into the hearts and minds of the rebels that this love will only end in misery. The once loving will turn into bitter misers and betray whomever that they believe put them in the torture chamber. Love may be worth “risking everything for” (Erica Jong) but unfortunately what happens in the end is that “you don’t risk anything, [and find yourself risking even more]” (Erica Jong). And by risking everything it is an admittance to die. Love and loyalty are not strong enough factors in this society- betrayal is, and by this betrayal one accepts condemnation to die.

Love and emotional attachments, the underlying components of human nature, lead one to fear pain and betrayal, as well as separation, ultimately causing one to accept the oppression and fear that allows the Party to thrive. In this society to survive one cannot allow a relationship to be formed. One must be solitary and isolated because it is necessary to have love, yet it is fatalistic to seek it out. Love has become a tool for the Party to manipulate. Human nature demands that families are loving and kind; that a couple can spend time together and that love should freely abound in a society. Yet, human nature is controlled and to love is to fear the torture and threats from the Party. Love is betrayal and human nature is to fight against this betrayal. People may wish to have relations with each other, yet the ultimate realization that comes from the novel is that no emotional ties or moral convictions are able to withstand extreme suffering. 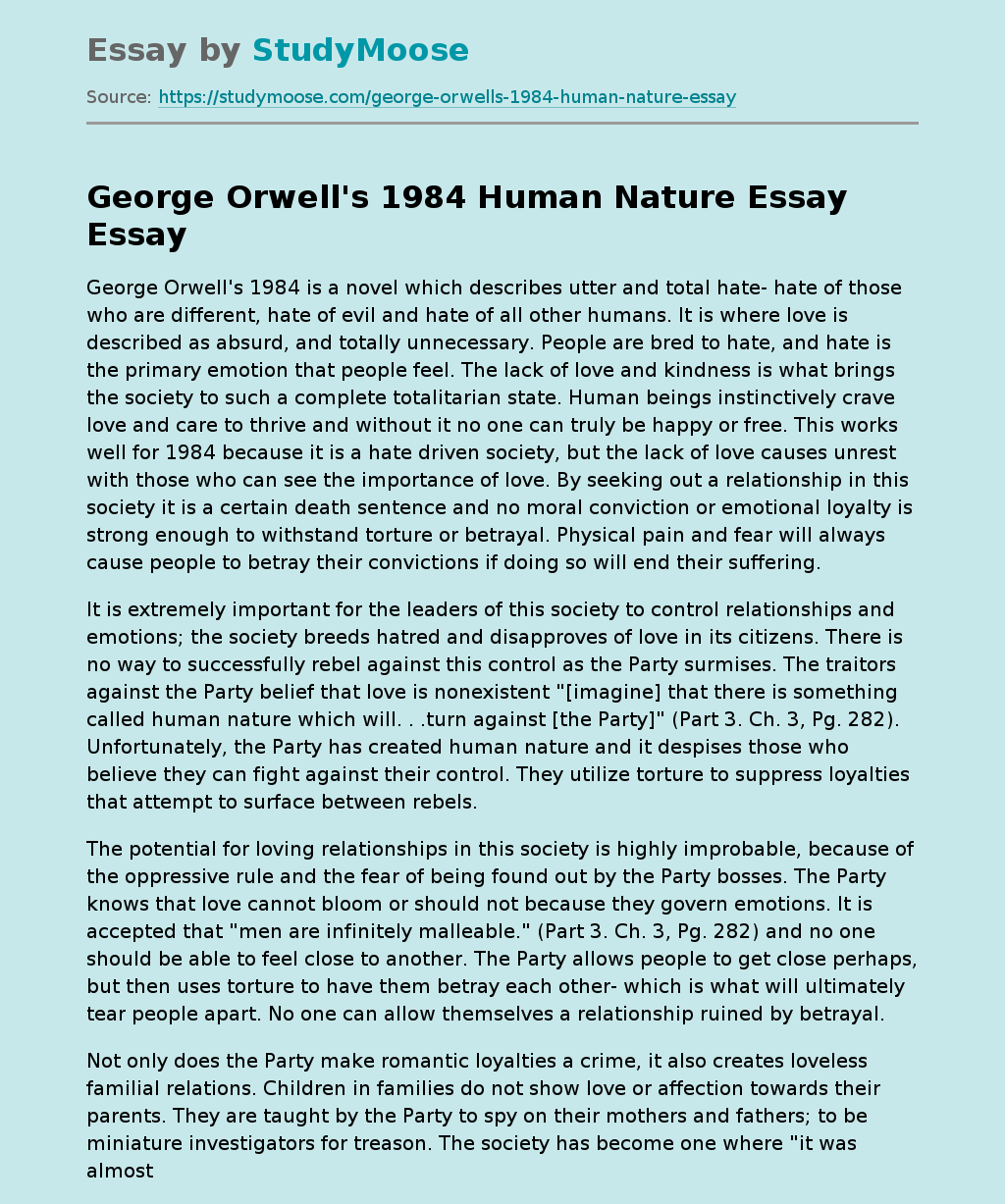