I chose to research on George Balanchine because he became known as the most influential ballet choreographer of the 20th century. He not only was the most influential ballet choreographer, but he worked with leading figures of American musical theatre two revues, fourteen musical comedies, four operettas, five Hollywood films, and a circus spectacle that are milestones of American popular culture. He was a very versatile choreographer and that’s what makes him very special to me. To be a versatile dance is always a plus.

Don't use plagiarized sources. Get your custom essay on
“ George Balanchine ”
Get custom paper
NEW! smart matching with writer

Also, George Balanchine was very close with Stravinsky and Tchaikovsky who had absolutely fantastic music.

Thirty-nine out of over four hundred ballets, George Balanchine used Stravinsky’s music. One of my favorite ballets is The Nutcracker, and it holds a very special place in my heart. I have danced in The Nutcracker for the past 8 years and it’s the one thing I look forward to every year. Unfortunately, now that I’m graduating this year, this Christmas was the last time I will be preforming in The Nutcracker for my dance studio.

Balanchine changed and shaped the style of ballet. When Balanchine was only ten years old he began to start making dances. “I taught this little ballet to eight boys in my class at school,” Balanchine recalled. Balanchine was born to be a choreographer. Balanchine formed his own company in 1933, Les Ballets.

Boston-born dance connoisseur Lincoln Kristein harbored a dream: He wanted to establish an American school of ballet that would equal — even rival — the established European schools, and he wanted to establish an American ballet company. Through Romola Nijinsky, whom Kirstein had assisted in her research for a biography of her husband, Kirstein met Balanchine and saw in him the means by which this dream could be realized, if only the choreographer could be persuaded to relocate to the United States. He moved back to the United States in 1934. The first product of the Balanchine-Kristein collaboration was the School of American Ballet, founded in 1934. The School remains in operation to this day, training students for the New York City Ballet and companies throughout the United States and the world.

In 1935, Kirstein and Balanchine set up a touring company of dancers from the school and called it the American Ballet. In 1946, Balanchine and Kirstein collaborated again to form Ballet Society, a company which introduced New York subscription-only audiences over the next two years to such new Balanchine works as The Four Temperaments (1946) and Stravinsky’s Renard (1947) and Orpheus (1948). Morton Baum, chairman of the City Center finance committee, saw Ballet Society during one of their subscription programs at City Center. Baum was so highly impressed, that he initiated negotiations that led to the company being invited to join the City Center municipal complex as the “New York City Ballet.” Balanchine’s talents at last had found a permanent home.

On October 11, 1948, the New York City Ballet was born, dancing a program consisting of Concerto Barocco, Orpheus and Symphony In C (a ballet which Balanchine had created for the Paris Opera Ballet under the title Le Palais de Cristal the previous year). From that time until his death, Balanchine served as artistic director for the New York City Ballet, choreographing the majority of the productions the company has introduced since its inception. Today, New York City Ballet is one of the largest and most highly esteemed classical ballet companies in the world, with a permanent repertory of more than 150 works, many of which are considered dance masterpieces. There are approximately 90 dancers in the Company, making it the largest dance organization in the country.

Balanchine is often referred to as the father of neoclassical ballet. What he did was put aside the story ballets and traditional ballet music in favor of other types of music that ballet was not normally danced to like Concerto Barocco for example. He and Lincoln wanted to make a truly modern and American form of ballet. Balanchine style is often characteristically flirty and fast which is one reason why the pieces were so short. They really are fast. He had pirouettes in lounge positions (not fifth) with crossed arms in front, as well as a characteristic “broken wrist” throughout all of his style. Arabesques are open with the hip facing the audience to give an illusion of a higher line. Balanchine himself has written: “We must first realize that dancing is an absolutely independent art, not merely a secondary accompanying one. I believe that it is one of the great arts. The important thing in ballet is the movement itself, as it is sound which is important in a symphony.

A ballet may contain a story, but the visual spectacle, not the story, is the essential element. The music of great musicians, it can be enjoyed and understood without any verbal introduction and the choreographer and the dancer must remember that they reach the audience through the eye and the audience, in its turn, must train itself to see what is performed upon the stage. It is the illusion created which convinces the audience, much as it is with the work of a magician. If the illusion fails, the ballet fails, no matter how well a program note tells the audience that it has succeeded” “Ask someone who’s danced Serenade and they’ll probably say it’s one of their favorite ballets to perform. Ask anyone who’s seen it and they’ll most likely recall sweeping ocean-blue skirts, glorious music, and the haunting final imagery of one woman held aloft in a backward arch like the regal masthead of a ship,” says Lisa Rinehart writer in Dance Magazine.

This neoclassical ballet for twenty women and six men has serious staying power. It is performed several dozen times a year by professional companies, university programs, and ballet schools all over the world. It is almost continually part of NYCB’s repertory. Balan­chine’s genius for theatrical imagery and lush, full movement pairs brilliantly with Tchaikovsky’s music and adds an entirely new dimension. “I think it was his breakthrough into the new, a glimpse of what was to come,” says former NYCB principal Maria Calegari. In the book Ballet 101, dance critic Robert Greskovic says, “Taking its poetic, dramatic color from its music, Serenade became, for the mid-20th century, the quintessential ‘ballet of mood,’ reliving the status and impact that Fokine’s Les Sylphides had at the turn of the century.”

In 1970 U.S. News & World Report attempted to summarize Balanchine’s achievements in the following words, “The greatest choreographer of our time, George Balanchine, is responsible for the successful fusion of modern concepts with older ideas of classical ballet. Balanchine received his training in Imperial Russia before coming to America in 1933. Here, the free-flowing U.S. dance forms stimulated him to develop new techniques in dance design and presentation which have altered the thinking of the world of dance. Often working with modern music, and the simplest of themes, he has created ballets that are celebrated for their imagination and originality. His company, the New York City Ballet, is the leading dance group of the United States and one of the greatest companies in the world.

An essential part of the success of Balanchine’s group has been the training of his dancers, which he has supervised since the founding of his School of American Ballet in 1934. Balanchine chose to shape talent locally, and he has said that the basic structure of the American dancer was responsible for inspiring some of the striking lines of his composition. Balanchine is not only gifted in creating entirely new productions — his choreography for classical works has been equally — fresh and inventive. He has made American dance the most advanced and richest in choreographic development in the world today.” Balanchine had a reputation throughout the dance world for the calm and collected way in which he worked with his dancers and colleagues. He changed and influenced the performing arts world in many ways. The Balanchine style will never be forgotten and neither will he. 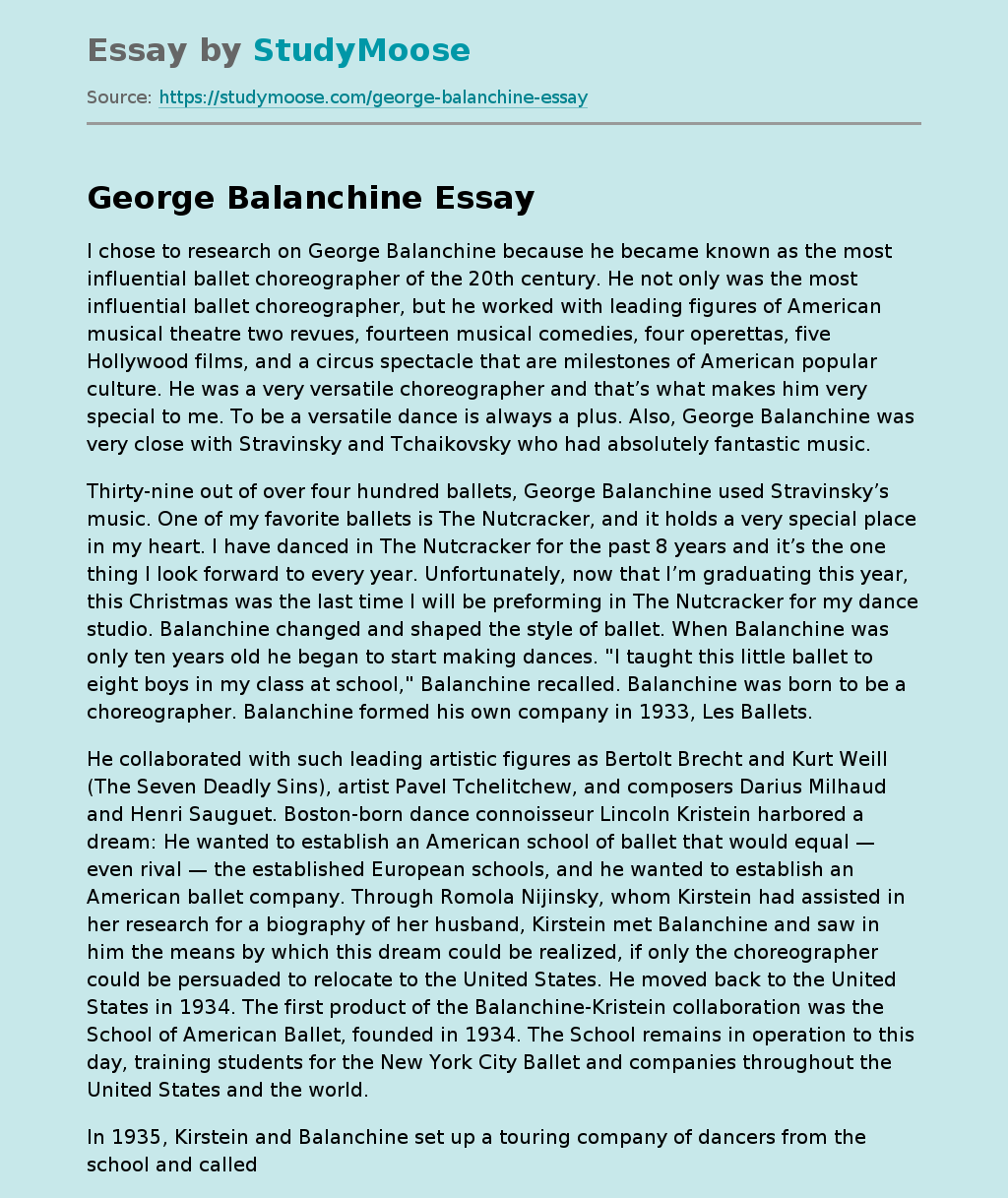