The word geo means the earth. The earth consists of all things that can be seen by the physical eye and also those that exist dip in the earth crust. Most of what comprises the earth is natural and very few of them are artificial. These things include mountains, rivers, lakes, trees, Ice Mountains and other phenomena. Human being is the soul living creature that is in charge of the earths happens and the events that take place in the earth directly affect human beings.

A geological hazards or disasters entail all the happenings that put human life in danger and under threat of death.

The basic geological hazards include tsunamis, volcanoes, sinkholes, landslides, geomagnetic storms and earth quakes among the rest. These occurrences have resulted into the deaths of very many people. The incidences are selective in the areas of their occurrences depending o the type of the hazard. Earth quakes for example are most prevalent in the sections of Japan and Korea.

Various preparations are always put in place to help avert the destructions caused by the happenings. The United States geological survey (USGS) is one such body that provides immediate information on the happenings above.

EARTHQUAKES Earth quakes come as a result if vibrations of the earth surface of movements that occur along the fault lines of the earth. They are caused by occurrences like manmade explosions and volcanic eruptions (Hough, Susan Elizabeth, 2006). The quakes can in turn trigger moire harmful events like tsunamis and the land slides.

Earth quakes always cause damage over large sections of the land depending on the magnitude and its strength. Statistics reveal that most earthquakes occur without any warning and result in los of many lives and damage to property.

People who live in the prevalent areas have great fear because they never know when the deadly day may arrive. Sudden release of energy from the earth’s surface results into tremors and shakings on the earth’s surface and as a result, there is creation of the seismic waves. The seismic waves sweep across the earth hence causing a lot of trouble and destruction in the earth and the people. The intensity of the earth quake is measured using a seismometer which is also known as a seismograph (Hough, Susan Elizabeth, 2004). The intensity of 7 is very dangerous and causes great damage.

Mercalli scale is the unit of measurement of the shaking strengths. The zone of origin of the earthquakes is called epicenter. Tsunamis always come as a result of the epicenter location in the sea beds. Research reveals that this environmental hazard comes as a result of many factors. These include geological faults, volcanic activities and even land slides. Other human activities that can cause earthquakes include nuclear reactions especially during the testing of nuclear weapons. Many parts of the world are considered as dander zones as far as earthquakes are concerned.

Middle East coasts like Japan and Korea are among the most dangerous places. The quakes begin from one place which is called the epicenter and then spread to longer distance depending on the magnitude of the shakes (Erickson, Jon, 2001). The earthquakes are considered is counted to be one of the most dangerous geological hazards in history. The event damages buildings and other infrastructures in the regions of occurrence. Other far places may also face danger because the sent signals can seriously affect the foundations of distant buildings especially the tall towers.

Land slides and avalanches are other events that come as a result of the earthquakes. This is because the earth’s stability is put to stress whenever there is a shakeup. Some fires have also been started by the quakes. Fires occur whenever the electric poles fall down and opposite poles come into contact. Many people have always died from these fires. The San Francisco earth quake of 1906 is one such example were more people died from fire than the shakeups (Seller, John, 1996). Human beings are the main sufferers in the event of an earth quake. Many lives are always lost because of the buildings falling on people. 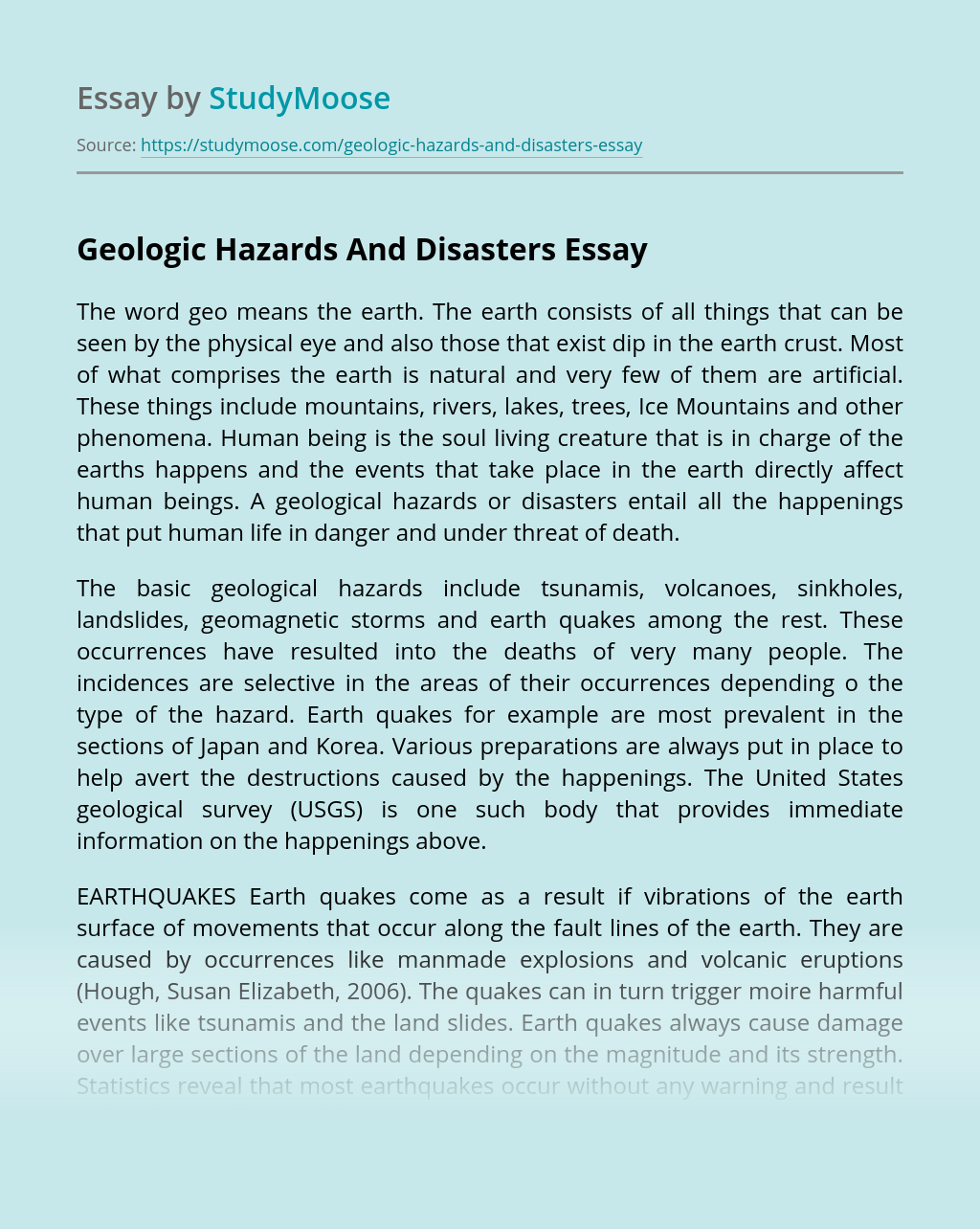 Don’t waste time
Get a verified expert to help you with Geologic Hazards And Disasters
Hire verified expert
$35.80 for a 2-page paper
Stay Safe, Stay Original