To investigate hypothesis 1 we visited 2 sites along the river Pang: Bucklebury Ford and Moor Copse. These sites can be seen in my field sketches, the first being Bucklebury Ford and the second being Moore Copse. I then took various measurements to measure velocity, discharge and the bankfull width to determine if my hypothesis is correct regarding changes in river characteristics.

Don't use plagiarized sources. Get your custom essay on
“ Geography River Coursework ”
Get custom paper
NEW! smart matching with writer

The picture on the right shows the sight we visited to carry out our experiments at Moor Copse, site 2. The two sites we visited can also be located in my A3 map of the three sites visited for this coursework.

Site 1 was Bucklebury Ford, which can be seen in my first field sketch. There was a lot of arable land around site 1. This is due to the likeliness of flooding. It would prevent damage to buildings as the arable land would soak up the water.

Site 2 was Moore Copse. There were lots of trees and natural levees surrounding the river at site 2. This would help infiltrate the water to prevent flooding. There were also lots of farming and arable land used to grow crops. This again prevented flooding from damaging valuable goods or buildings. However nearby the river was a car park and a foot path ran along beside the river. The impermeable surface of the car park would allow water to build up and increase the risk of flooding in the area. This is why the arable land and vegetation is so crucial at Moor Copse. The picture on the left shows Moor Copse, as does my second field sketch.

Depth (see graph 2 and 4)- the information I collected at site 1 and site 2 shows that the average depth increases by 0.08 metres between sites 1 and 2. This proves that the depth of the River Pang increases with distance from the source. At Bucklebury Ford the average depth was 0.25 metres and at site, Moor Copse, it was 0.33 metres. The graphs of the river at every 25cm also show that the depth increases with distance from the source.

Stream width (see graph 8) – The stream width at Bucklebury Ford (Site 1) is 5.23 metres but at Moor Copse (Site 2) it is 10.01 metres. This considerable difference between the two sites shows that the River Pang gets wider as you go further downstream.

Bankfull width (see graph 7)- The bankfull width at Bucklebury Ford is 6.86 metres and at Moor Copse it is 16.00 metres. Since the bankfull width is measured from the highest point of both banks, these results prove that the river gets wider as you go futher downstream. This dramatic difference of almost double the width shows the scale of the increase.

Discharge (see graph 5) – The data collected at sites 1 and 2 measuring velocity clearly show that the river discharge increases downstream. At Bucklebury Ford (site 1) the discharge was 0.56 cumecs (m3 sec.) and at Moor Copse (site 2) the discharge was 1.683 cumecs. This increase shows the increase, which is mainly due to surface run off as well as joining streams between the sites.

Why does the river become wider and deeper?

why does the velocity increase?

In the upper courses of the river there is more sediment in the water. This slows the flow down as it causes obstructions for the water to have to get past. There is also much more friction further upstream in the smaller channels as there are more sediment to be moved meaning thee is more resistance slowing the river down. Further downstream there is a larger hydraulic radius so there is a smaller amount of water in its cross section in contact with the wetted perimeter. This creates less friction meaning there is a greater velocity as the energy loss is reduced. This can be summarised using the

Sigh 2 has a higher hydraulic radius than site 1 meaning it has a smaller amount of water in the cross-section creating less friction therefore reducing energy loss and allowing a greater velocity.

After evaluating all the data I collected at the two sites on the river Pang, I can conclude that the characteristics of the river Pang change with distance from the source, meaning I have proved my hypothesis to be true. After drawing graphs to represent my data I can see that the depth, width, area, velocity, discharge and wetted perimeter have all increased between the two sites due to the number of tributaries, amount of energy and other factors that contribute to the characteristics of the River Pang.

For this coursework I had to use secondary data. Although I visited the two sites along the river Pang the results were not accurate in comparison with results from previous years that are known to be correct. This could be due to a number of factors, the most likely being that water was being taken out of the river for use at some point I the river between the two sites.

Despite this problem, I think the results produced were accurate. When taking measurements from the river we had to be very precise and check our results at least three times to ensure they were accurate and reliable.

Ideally, i would have collected the results from the river myself and they would have been accurate. This would mean I could be certain that the results I was using were accurate and reliable. However I am sure the secondary results used wee equally reliable. 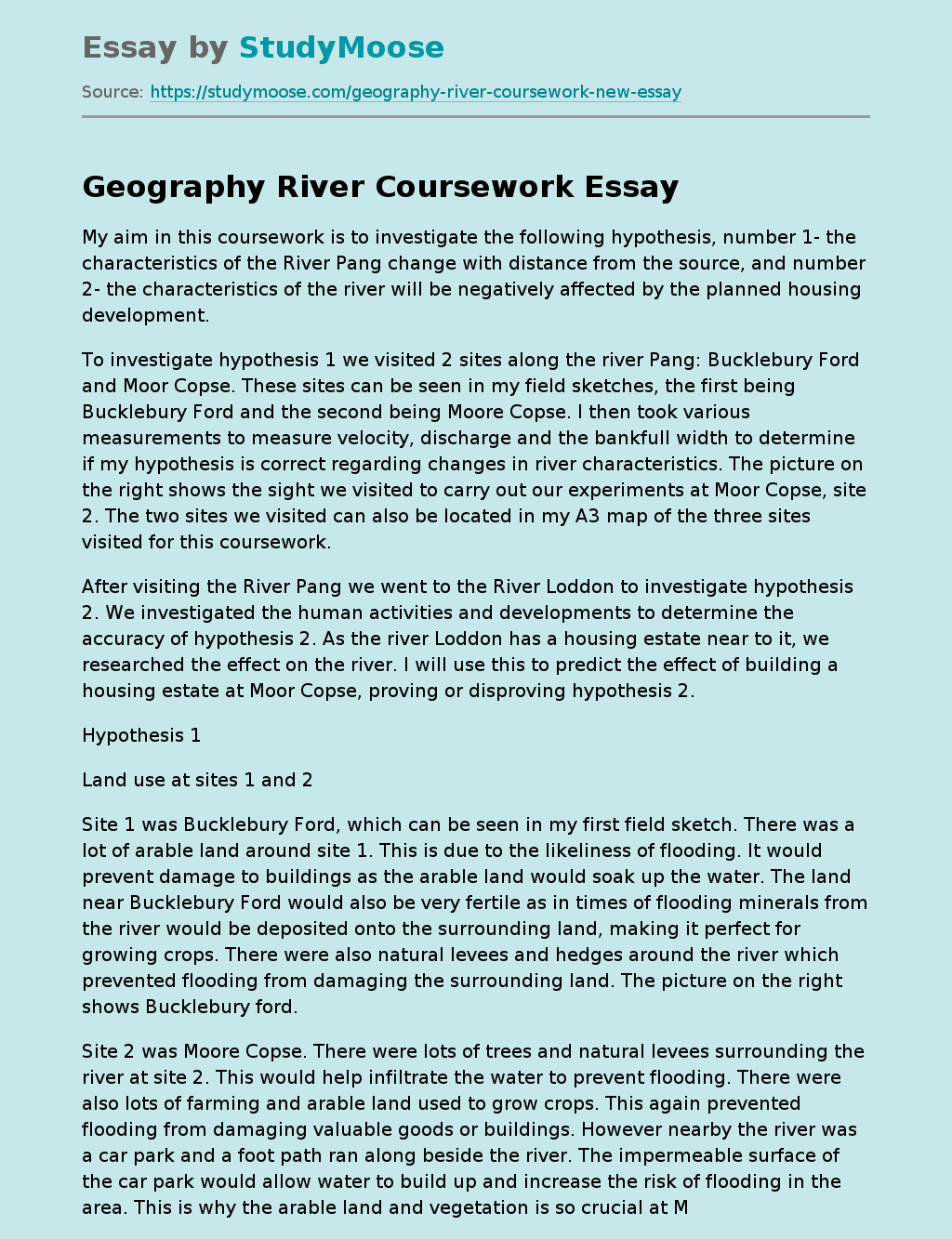