Geographical location and boundaries of India

India is one of the ancient civilizations in the world. It has achieved multi-faceted socioeconomic progress during the last five decades. It has moved forward displaying remarkable progress in the field of agriculture, industry, technology and overall economic development. India has also contributed significantly to the making of world history.

LOCATION OF INDIA IN THE WORLD

The Indian landmass has a central location between the East and the West Asia. India is a southward extension of the Asian Continent. The Trans Indian Ocean routes which connect the countries of Europe in the West and the countries of East Asia provide a strategic central location to India. Note that the Deccan Peninsula protrudes into the Indian Ocean, thus helping India to establish close contact with West Asia, Africa and Europe from the western coast and with Southeast and East Asia from the eastern coast. No other country has a long coastline on the Indian Ocean as India has and indeed, it is India’s eminent position in the Indian Ocean which justifies the naming of an Ocean after it.

India’s contacts with the World have continued through the ages but her relationships through the land routes are much older than her maritime contacts. The various passes across the mountains in the north have provided passages to the ancient travellers, while the oceans restricted such interaction for a long time. These routes have contributed in the exchange of ideas and commodities since ancient times. The ideas of the Upanishads and the Ramayana, the stories of Panchtantra, the Indian numerals and the decimal system thus could reach many parts of the world. The spices, muslin and other merchandise were taken from India to different countries. On the other hand, the influence of Greek sculpture, and the architectural styles of dome and minarets from West Asia can be seen in different parts of our country.

INDIA’S NEIGHBOURS AND ITS POSITION IN SOUTH ASIA

India occupies an important strategic position in South Asia. India has 29 states and 7 Union Territories. India shares its land boundaries with Pakistan and Afghanistan in the northwest, China (Tibet), Nepal and Bhutan in the north and Myanmar and Bangladesh in the east. Our southern neighbors across the sea consist of the two island countries, namely Sri Lanka and Maldives. Sri Lanka is separated from India by a narrow channel of sea formed by the Palk Strait and the Gulf of Mannar while Maldives Islands are situated to the south of the Lakshadweep Islands.

India has had strong geographical and historical links with her neighbors. Look at the physical map of Asia in your atlas, and note how India stands apart from the rest of Asia.

The Tropic of Cancer passes through the middle of the country dividing it into two latitudinal halves. The area to the north of Tropic of Cancer is nearly twice the area which lies to the south of it. South of 22° north latitude, the country tapers off over 800 km into the Indian Ocean as a peninsula.

The temperate part (north of Tropic of Cancer) is twice the area of tropical part.

But India has always been treated as a tropical country for two different reasons – physical and cultural.

The country is separated from the rest of Asia by Himalayas.

Its climate is dominated by the tropical monsoons and the temperate air masses are blocked by Himalayas.

Entire area south of the Himalayas is essentially tropical from climatic point of view: Although the night temperatures in Winter at several places in North India may come down to the level of those prevailing in temperate lands, yet clear skies and intense insolation raise the day temperatures to a tropical level.

Settlements, diseases, agricultural and primary economic activities are all tropical in nature.

It is primarily because of Himalayas that India is a tropical country.

Barring Madhya Pradesh, Chhattisgarh, Jharkhand, Delhi, Haryana and Telangana, all other States in the country have one or more international borders or a coastline and can be regarded as frontline States from the point of view of border management.

The length of India’s land borders with neighboring countries is as under:

Data from Ministry of Home Affairs (Department of Border Management)

This is the second longest border of India, next only to its border with Bangladesh.

The Sino-Indian border is generally divided into three sectors namely: (i) the Western sector, (ii) the Middle sector, and (iii) the Eastern sector.

Separates Jammu and Kashmir state of India from the Sinkiang (Xinjiang) province of China.

The western sector boundary is largely the outcome of the British policy towards the state of Jammu and Kashmir.

China claims the Aksai Chin district, the Changmo valley, Pangong Tso and the Sponggar Tso area of north-east Ladakh as well as a strip of about 5,000 sq km down the entire length of eastern Ladakh. China also claims a part of Huza-Gilgit area in North Kashmir (ceded to it in 1963 by Pakistan).

The 1,140 km long boundary between India and China runs from the eastern limit of Bhutan to a point near Talu-Pass at the trijunction of India, Tibet and Myanmar.

This line is usually referred to as the Mc Mahon Line after Sir Henry Mc Mahon, then foreign secretary of British India, who negotiated the boundary agreement between Great Britain and Tibet at Shimla accord in 1913-14.

Five states of India, namely Uttarakhand, Uttar Pradesh, Bihar, West Bengal and Sikkim touch the Nepalese border with India. The border is a porous one with unrestricted movement of goods and people between Indian and Nepal.

Major portion of Indo-Nepalese border runs in the east-west direction almost along the foothill of the Shiwalik Range.

Quite peaceful border and there is no boundary dispute between the two countries.

The Indo-Pakistan boundary is the result of partition of the country in 1947 under the Radcliffe award of which Sir Cyril Radcliffe was the chairman. Jammu and Kashmir, Sir Creek are the major disputed regions.

India’s 4,096 km long border with Bangladesh is the longest.

This boundary has been determined under the Radcliffe Award which divided the erstwhile province of Bengal into two parts.

This boundary runs roughly along the watershed between the Brahmaputra and Ayeyarwady [Irrawaddy]. It passes through thickly forested regions, with Mizo Hills, Manipur and Nagaland on the Indian side and Chin Hills, Naga Hills and Kachin state on the Myanmar side.

India and Sri Lanka are separated from each other by a narrow and shallow sea called Palk Strait.

Dhanushkodi on the Tamil Nadu coast in India is only 32 km away from Talaimanar in Jaffna peninsula in Sri Lanka. These two points are joined by a group of islets forming Adam’s Bridge.

Geographical location and boundaries of India. (2019, Aug 19). Retrieved from https://studymoose.com/geographical-location-and-boundaries-of-india-essay 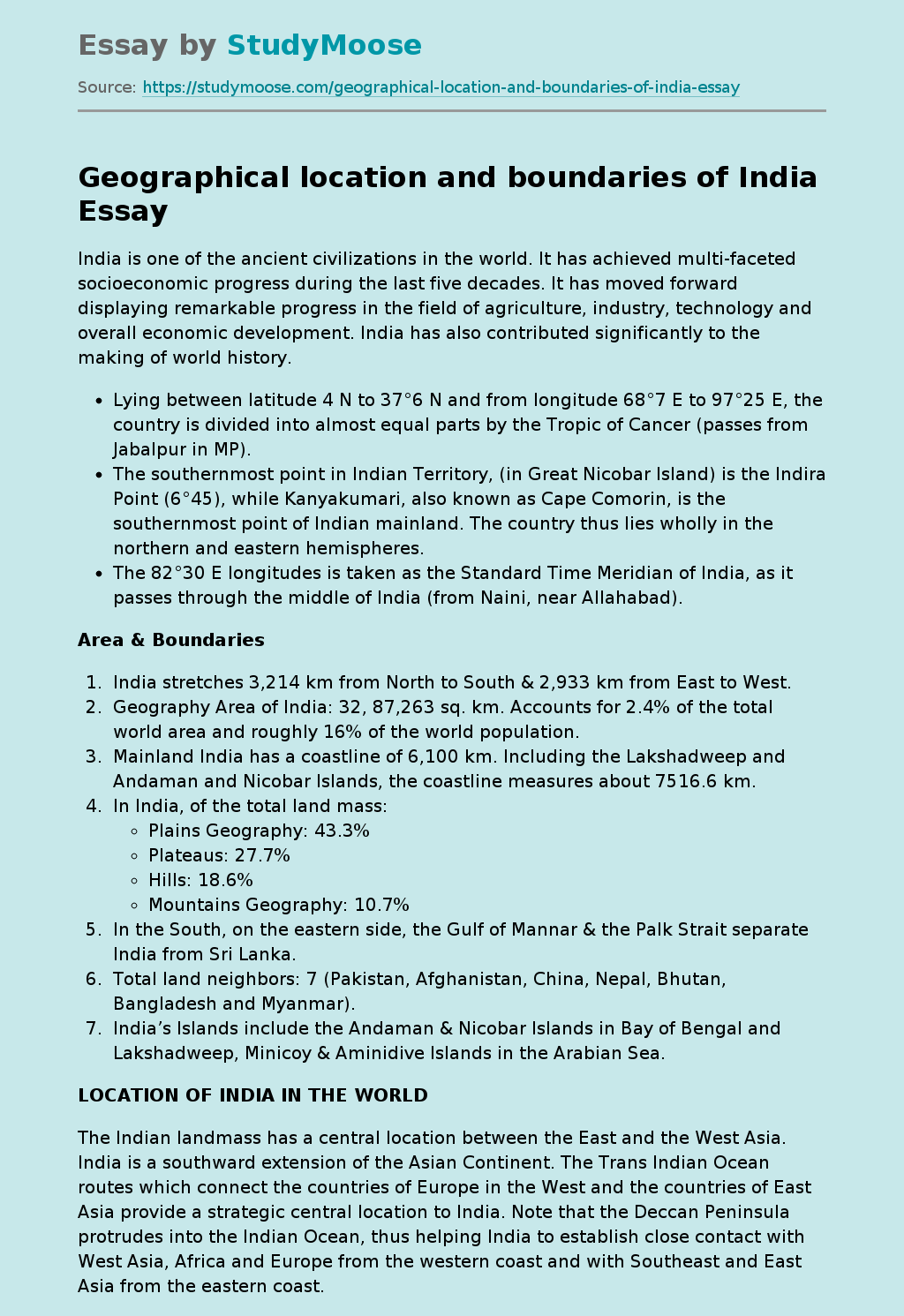