"Genocide is the deliberate killing of a large group of people, especially those of a particular ethnic group or nation." (Genocide)

Introduction
“In 1994 Rwanda experienced the worst genocide in modern times. The Rwandan Genocide was a genocidal mass slaughter of the Tutsis by the Hutus that took place in 1994 in the East African state of Rwanda. It is considered the most organized genocide of the 20th century.

Over the course of approximately 100 days (from the assassination of Juvenal Habyarimana and Cyprien Ntaryamira on April 6 through mid-July) over 500,000 people were killed, according to a Human Rights Watch estimate. Estimates of the death toll have ranged from 500,000–1,000,000, or as much as 20% of the country’s total population.

Don't use plagiarized sources. Get your custom essay on
“ “Genocide is the deliberate killing of a large group of people, especially those of a particular ethnic group or nation.” (Genocide) ”
Get custom paper
NEW! smart matching with writer

It was the culmination of longstanding ethnic competition and tensions between the minority Tutsi, who had controlled power for centuries, and the majority Hutu peoples, who had come to power in the rebellion of 1959–62.” (“Rwandan Genocide”) History between the Hutu and Tutsi people

“In 1990, the Rwandan Patriotic Front, a rebel group composed mostly of Tutsi refugees, invaded northern Rwanda from Uganda in an attempt to defeat the Hutu-led government.

This exacerbated ethnic tensions in the country. In response, many Hutu gravitated toward the Hutu Power”(“Rwandan Genocide”), an ideology propounded by Hutu extremist, with the prompting of state-controlled and independent Rwandan media. “As an ideology, Hutu Power asserted that the Tutsi intended to enslave the Hutu and must be resisted at all costs. Continuing ethnic strife resulted in the rebels’ displacing large numbers of Hutu in the north, plus periodic localized Hutu killings of Tutsi in the south.

International pressure on the Hutu-led government of Juvenal Habyarimana resulted in a cease-fire in 1993. He planned to implement the Arusha Peace Agreement.”(Rwandan Genocide) “The assassination of Habyarimana in April 1994 set off a violent reaction, during which Hutu groups conducted mass killings of Tutsis (and also pro-peace Hutus, who were portrayed as “traitors” and “collaborators”).

Alongside the military, primary responsibility for the killings themselves rests with two Hutu militias that had been organized for this purpose by political parties: the Interahamwe and Impuzamugambi, although once the genocide was underway a great number of Hutu civilians took part in the murders. It was the end of the peace agreement. The Tutsi Rwandan Patriotic Front restarted their offensive, defeating the army and seizing control of the country.”(Rwandan Genocide) Overview of the Rwandan Genocide with International Response

“After the Hutu presidents plane is gunned down on April 6. Hutu gunmen systematically start tracking down and killing moderate Hutu politicians and Tutsi leaders. The deputy to the U.S. ambassador in Rwanda tells Washington that the killings involve not just political murders, but genocide. The U.S. decides to evacuate all Americans. Canadian General Romeo Dallaire, head of the U.N. peacekeeping force in Rwanda, is told by headquarters not to intervene and to avoid armed conflict.” In the next few days, “evidence mounts of massacres targeting ordinary Tutsis.

Front page stories newspaper stories cite reports of “tens of thousands” dead and “a pile of corpses six feet high” outside a main hospital. Gen. Dallaire requests a doubling of his force to 5,000. Nearly 3,300 Americans, French, Italians and Belgians are evacuated by troops sent in from their countries. On April 15th Belgium withdraws its troops from the U.N. force after ten Belgian soldiers are slain. Embarrassed to be withdrawing alone, Belgium asks the U.S. to support a full pullout. Secretary of State Christopher agrees and tells Madeleine Albright, America’s U.N. ambassador, to demand complete withdrawal.

She is opposed, as are some African nations. She pushes for a compromise: a dramatic cutback that would leave a token force in place. April 16th, The New York Times reports the shooting and hacking to death of some 1000 men, women and children in a church where they sought refuge. Day 12, By this date, Human Rights Watch estimates the number of dead at 100,000 and calls on the U.N. Security Council to use the word “genocide.”Belgian troops leave Rwanda; Gen.

Dallaire is down to a force of 2,100. He will soon lose
communication lines to outlying areas and will have only a satellite link to the outside world. By April 25th,Gen. Dallaire is down to 450 ill-equipped troops from developing countries. He works to protect some 25,000 Rwandans who are at places guarded by U.N. forces.

He still hopes the Security Council will change its mind and send him forces while there is still time.”(Ghosts of Rwanda) “On May 1st a Defense Department discussion paper, prepared for a meeting of officials having day-to-day responsibility on the crisis, is filled with cautions about the U.S. becoming committed to taking action. The word genocide is a concern. “Be careful.

Legal at State was worried about this yesterday — Genocide finding could commit [the U.S.] to actually ‘do something.”(Ghosts of Rwanda) “Bureaucratic paralysis continues. Few African countries offer troops for the mission and the Pentagon and U.N. argue for two weeks over who will pay the costs of the APCs and who will pay for transporting them. It takes a full month before the U.S. begins sending the APCs to Africa.

They don’t arrive until July. Seven weeks into the genocide, President Clinton gives speech that restates his policy that humanitarian action anywhere in the world would have to be in America’s national interest:”The end of the superpower standoff lifted the lid from a cauldron of long-simmering hatreds. Now the entire global terrain is bloody with such conflicts, from Rwanda to Georgia.

Whether we get involved in any of the world’s ethnic conflicts in the end must depend on the cumulative weight of the American interests at stake.”(Ghosts of Rwanda) “Eleven weeks into the genocide, with still no sign of a U.N. deployment to Rwanda, the U.N. Security Council authorizes France to unilaterally intervene in southwest Rwanda.

French forces create a safe area in territory controlled by the Rwanda Hutu government. But killings of Tutsis continue in the safe area.”(Ghosts of Rwanda) “By July 17th, Tutsi RPF forces have captured Kigali. The Hutu government flees to Zaire, followed by a tide of refugees. The French end their mission in Rwanda and are replaced by Ethiopian U.N. troops. The RPF sets up an interim government in Kigali. Although disease and more killings claim additional lives in the refugee camps, the genocide is over.”(Ghosts of Rwanda) Day 100

An estimated 800,000 Rwandans have been killed.
The Aftermath
“In anticipation of a Tutsi retaliation, approximately 2 million Hutus, participants in the genocide, and the bystanders, fled from Rwanda to Zaire (now called Congo), Burundi, Tanzania and Uganda. Thousands of them died in disease epidemics common to the squalor of refugee camps, such as cholera and dysentery. The United States staged the Operation Support Hope airlift from July to September 1994 to stabilize the situation in the camps.”(Rwandan Genocide) “The presence of 2 million refugees in eastern Zaire helped destabilize the already weak country, whose corrupt president, Mobutu Sese Seko, allowed Hutu extremists among the refugee population to operate with impunity.

In October 1996, Mobutu’s continued support of the Hutu militants led to an uprising by the ethnic Tutsi Banyamulenge people in eastern Zaire (supported politically and militarily by Rwanda), which marked the beginning of the First Congo War, and led to a return of more than 600,000 Hutu refugees to Rwanda during the last two weeks of November.

This massive repatriation was followed at the end of December by the return of 500,000 more from Tanzania after they were ejected by the Tanzanian government. Various successor organizations to the Hutu militants operated in eastern DR Congo until May 22, 2009.”(Rwandan Genocide) “Mobutu was overthrown in May 1997, and Zaire’s new leader, Laurent Kabila, renamed the country the Democratic Republic of Congo.

Kabila’s relationship with his Rwandan allies quickly turned sour, and in August 1998 Tutsi rebel forces, supported by Rwanda and Uganda, launched another rebellion. This led to the Second Congo War, killing 5 million people from 1998 to 2004. Rwanda today has two public holidays commemorating the incident, with Genocide Memorial Day on April 7 marking the start, and Liberation Day on July 4 marking the end. The week following April 7 is designated an official week of mourning.

One global impact of the Rwandan Genocide is that it served as impetus to the creation of the International Criminal Court, so that ad hoc tribunals would not need to be created for future incidents of genocide, crimes against humanity, and war crimes.”(Rwandan Genocide) Works Cited

"Genocide is the deliberate killing of a large group of people, especially those of a particular ethnic group or nation." (Genocide). (2016, May 13). Retrieved from http://studymoose.com/genocide-is-the-deliberate-killing-of-a-large-group-of-people-especially-those-of-a-particular-ethnic-group-or-nation-genocide-essay 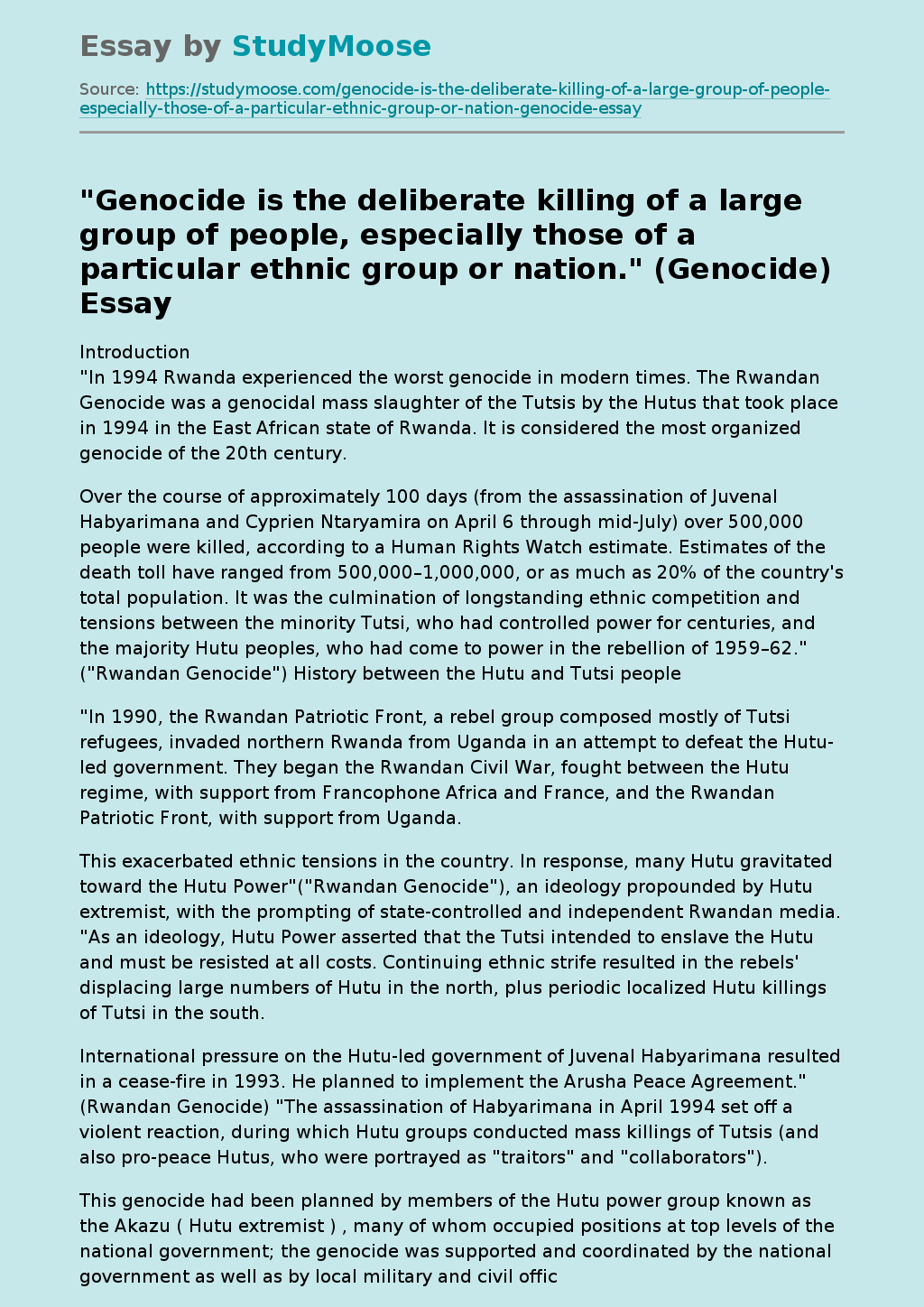