To achieve genetic experiments with haploid organisms, genetic strains of different genotypes must be crossed from one another. Following fertilization and meiosis, the meiotic products can be analyzed as the ascomycete fungus, Sordaria fimicola. Sordaria can be used as a model to study meiotic segregation. The trait followed was the ascospore color. Ascospore color is a single gene trait therefore it is easily observed under a light microspore. Which allele is dominant is very tough to say, because dominant and recessive does not apply in this case.

Turn in your highest-quality paper
Get a qualified writer to help you with
“ Genetics of Ascospore Color in Sordaria lab ”
Get high-quality paper
NEW! AI matching with writers

Sexual spores are confined in a saclike form called asci (singular – ascus). Inside the asci, karyogamy occurs and combines the two parental genomes, and then meiosis forms genetically diverse ascospores. Eight ascospores can be found lined up in a row in the asci; they form a single zygote, which is diploid.

These arrangements provide scientists to study genetic recombination. The genetic differences between mycelia grown form ascospore taken from one ascus that reflect crossing over and independent assortment of chromosomes during meiosis.

An interesting fact about ascospore arrangements is that there occurs no hybridization, and there are peculiar forms of cross over. Ascomycetes can also reproduce asexually by spores called conidia, which are spores that are dispersed by wind and are produced at the end of the hyphae. Another interesting fact about Sordaria is the ability to maintain a constant liner order, permitting the observer to detect the behavior of chromosomes during meiosis. The genetic experiment consists of performing the crossing over of black spores (wild type +) and tan spores (mutant n).

Two weeks before the fungi lab, crosses between the wild type and the tan strains of Sordaria are prepared. Each lab member needs a Petri plate with a sterile crossing agar. A wax is pencil is utilized to draw a line on the bottom of the plate deciding it into quarters. Alternating quadrants are labeled with + (wild type) and n (mutant). A steel spatula should be burned over a burner to sterilize it; allow it to cool, and then utilize it to cut a small piece of agar containing mycelium from the culture of the wild type Sordaria. Place the small piece in the side of the Petri dish that is marked (+). The same is done for the other quadrant (n); and then inoculate the quadrants marked with (n), from the tan Sordaria plate. Later, seal the edge of the Petri dishes with some parafilm and place inverted in the dark at room temperature or in a 25C incubator, for slow growth place in the refrigerator.

After two weeks, the inoculated plates are ready to be examined. In the place where the growths of the two strains meet, using a dissecting needle, remove several mature ascocarps. The mature ascocarps are inserted in a microscope slide containing a drop of water. Set a cover glass and with a dissecting scope, gently apply pressure to the cover glass with the eraser end of a pencil until the ascocarps break open and the asci are visible. Do not press hard because the asci may break and they have to be intact. The asci are then examined under low magnification. One has to make sure that the asci observed contain eight ascospores, and have both colors of ascospores present (tan = dark and wild-type = light). One should be able to collect approximately one hundred asci.

Crossing over is also employed to study the position of the genes on chromosomes. Each lab member must count the amount of heterozygous asci found, and with the data, calculate the map distance between the spore color locus and the centromere. The formula used to calculate it is illustrated above:

* 0.5 refers to the ascospores because only four of each strand of eight in each ascus is recombined.

After crossing wild-type and tan strand of Sordaria, five different ascospores arrangements were located. The patterns found were ++++nnnn, ++nn++nn, ++nnnn++, nn++++nn, and n++++nnn. Applying the information and observations collected throughout the lab, one can calculate the map distance between the spore color locus and the centromere. The result of the map distance was ________.

The spore pattern was studied in the asci to determine if crossing over has occurred or not. Wherever gene recombination took place, black and tan ascospores were observed in the same ascus. If the ascospores arrangement has four black and tan ascospores in a row, then hybridization took place but no crossing over arose. Also, if the frequency of crossing over is recognized, one can estimate the distance between the gene of interest (color-coding gene) and the centromere on the chromosomes. Even though the data received was lower than expected, one was able to find more recombinations with crossing over than with first-division segregation pattern. Because a higher number of crossing over was obtained, it was simple to study the position of genes on chromosomes. The further from the centromere, the more chances a cross over will occur.

The objective of the experiment, which was to cross wild-type and tan-type Sordaria, was successfully accomplished; consequently one learned various things about gene crossing over. One can acknowledge that ascospores are haploid because they are formed by meiosis is asci. As a result, ascospore color is a single gene trait, so there is no dominant or recessive allele for ascospore color. 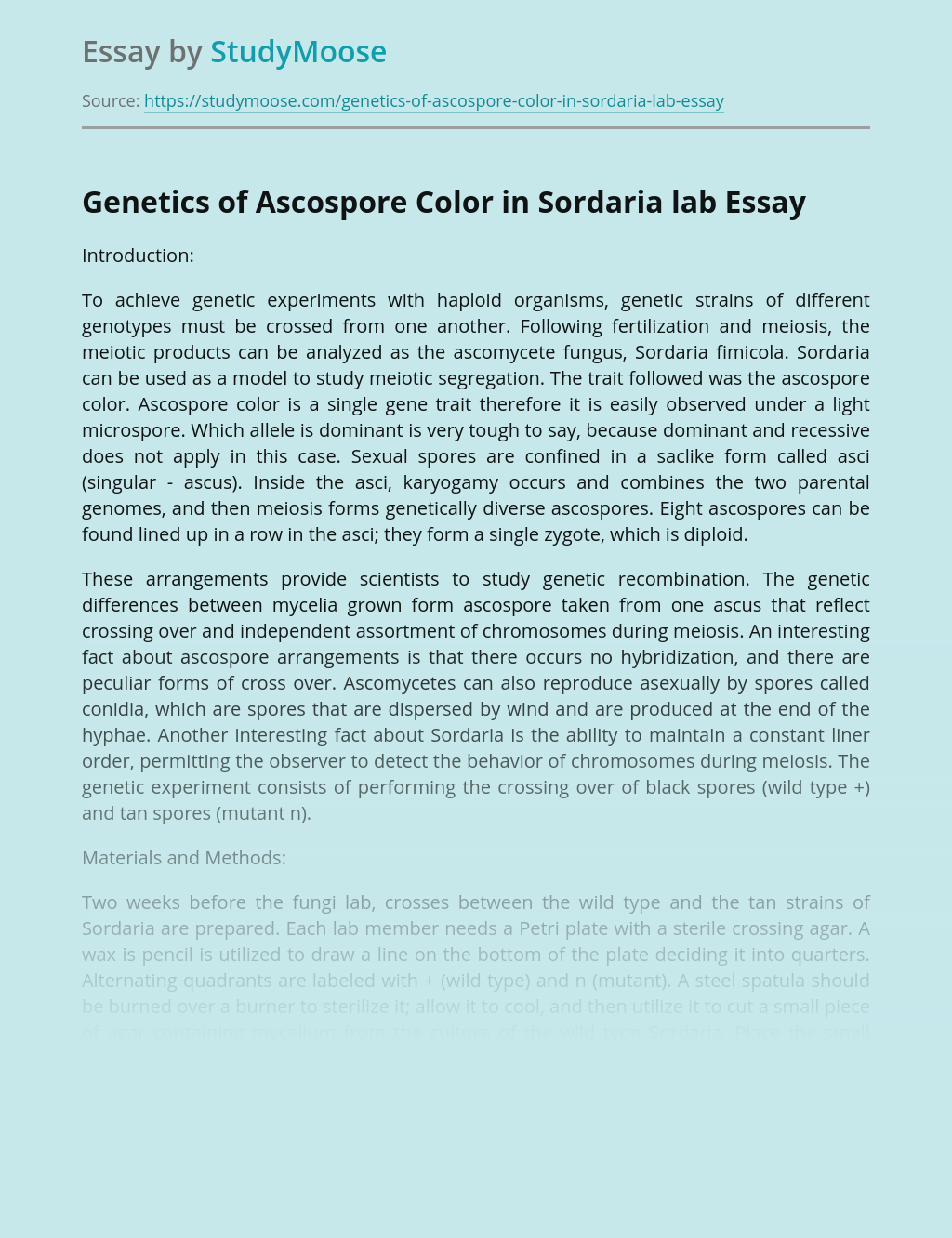 Turn in your highest-quality paper
Get a qualified writer to help you with
“ Genetics of Ascospore Color in Sordaria lab ”
Get high-quality paper
Helping students since 2015
Stay Safe, Stay Original