The 21st century is the era of the DNA. The century before, was the era of computers, which brought about remarkable technological advancements to society and these have also contributed to the current genetic revolution, which promises to do for life what computers did for information. This increasing power and accessibility may one day give parents the option of genetically engineering the “designer baby”. This may be used to spare the unborn from disease or, possibly, make them tall, intelligent and blessed with any desirable traits.

Don't use plagiarized sources. Get your custom essay on
“ Genetic Engineering ”
Get custom paper
NEW! smart matching with writer

Genetic engineering has given humans the power to alter the very basis of life on earth which will forever change life as we know it. This essay will explain the various views on genetic engineering but will primarily concentrate on “the ethics of genetically engineering the designer baby”.

Genetic engineering is described as the use of various methods to intentionally manipulate DNA, to produce biological products or to change hereditary traits. It has many uses that include repairing a genetic defect, picking a select group of genes to achieve a specific outcome – in the case of designer babies, curing diseases by altering the gene, and testing for inherited diseases.

This might be the only way for humanity to keep up to date with the staggering pace of technological advancement.

The benefits of genetic engineering are boundless. This medical intervention would allow a family to virtually eradicate a genetic disease in only a few generations. Muscular Dystrophy (MD) is a great example. MD is a group of genetic and muscle diseases that weaken the muscles of the body. With the new advances of technology, doctors can test each of the eggs for the gene for MD. If they find an egg that does not carry the gene, they can implant it and reduce the chances for this disease. This also means less money will be spent in hospitals for medical treatments needed for a sick child in the future.

The possibility of perfecting the human gene is very exciting; however it can also be very alarming. Are doctors and parents playing “God”? We were created a certain way and it goes against nature, and religion, to pick and choose how we want our children to be. Do they have the right to predetermine how their baby will look, what genes they will carry, and for what purpose? Who determines what traits are acceptable?

To genetically modify a child will cost approximately US$18,000. This brings us to the question; why are only wealthy couples able to prevent their children from developing genetically inherited diseases? This could cause inequalities between the rich and poor classes in society. If this practice is allowed and becomes socially acceptable, would governments have a role to play in making it available to its entire people for the benefit of society at large? [1: Designer Babies, The Future, 2009, http://futurestorm.blogspot.com.au/2009/03/new-la-clinic-lets-parents-genetically.htmlAccessed: 3rd November2014]

However, by venturing down a path of creating perfectly healthy babies that are disease and disability free, as a society we would be removing the naturalism that already exists within the world. This may result in a new wave of negative perceptions of ordinary people without these genetic enhancements. Will this super class of humans widen the gap of discrimination between people with enhancements and those without?

Using genetic modification to cure diseases and disorders is beneficial to parents, children, and society. However, using genetic engineering to create super-children with superior intellects and perfect features is wrong. Science and technology has its place in helping the human race. It should be used to save lives and improve the quality of lives. Using scientific research to appease parent’s vanity hurts us as a race. It will create divisions between the “master-race” and normal people. It says to the children of these parents that they couldn’t have been good enough on their own.

If designer babies were to become commonplace, individuality as we know it would most likely cease to exist. Not everyone would look exactly the same; some parents may want their baby to have brown eyes, as opposed to green. Other parents may want their child to be more tan skinned rather than fair skinned. But as a whole, many people would be pretty, healthy, and intelligent. What parent wouldn’t want these basic traits in their child?

A society of pretty, healthy, and intelligent people may sound reasonable and even favourable, until the full social implications are considered. Genetic engineering is a great step on our journey to helping those in need. It shouldn’t be wasted on vanity. Whilst I understand how parents want their children to be perfect it is not moral to completely determine and change the future of an unborn child for the sake of appearances.

“Is It Moral to Genetically Engineer Our Children?” The Premier Online Debate Website. Web. 3 Nov. 2014. . 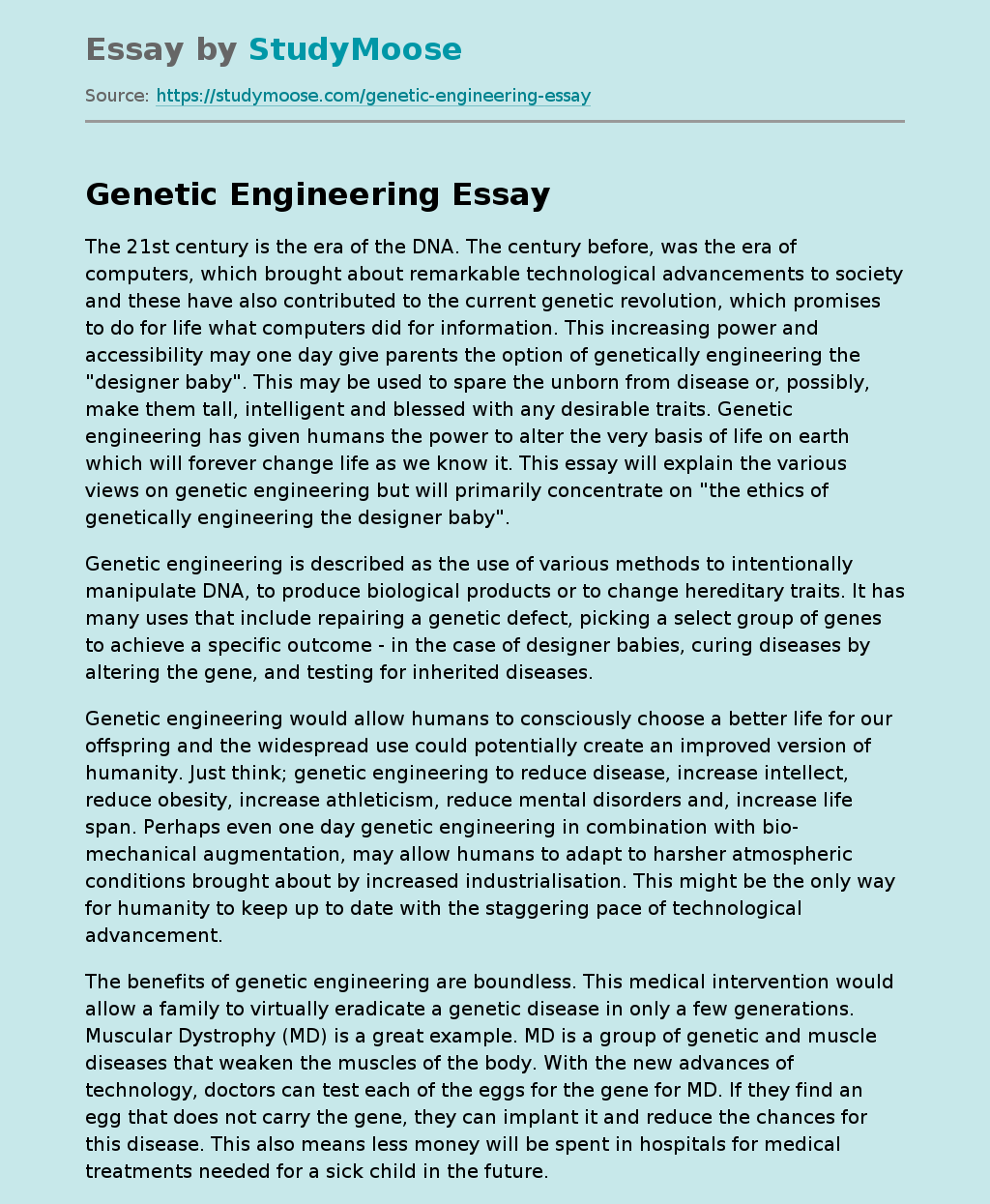