Generation can be defined as a succeeding stage in the reproduction from an original copy. In other words generation is also known as procreation, which means producing an offspring. But the generation we are talking over here is the stage if natural decent for example, from grandfather, to father, to son. In present time’s generation a group of people born into and shaped into by a specific time period. For example, people born between 1946 and 1964 are called baby boomers and people born from 1965 to 1980 are called generation X.

Don't use plagiarized sources. Get your custom essay on
“ Generation Y (The Millennial) ”
Get custom paper
NEW! smart matching with writer

There is a generation gap which separates all of these 3 stages.

The generation gap can be defined as the difference between the younger people and elders. For example in marketing many researchers are actually turning to a great deal of generation segmentation. Why? Because the idea is that each generation is mostly influenced by the milieu which means in which time the person grew up (it would include music, politics and events of the time).

There are some marketers which target the generation, because they are aware that the members if this society actually grew distrustful of society, politicians and slick advertising and merchandising.

The generations that we are going to discuss are as follows. (Gibson, Greenwood & Murphy 2008) Generation Y The people of generation Y are called echo boomers as well. About 72 million children of the baby boomers were born between 1980 and 1994. It’s been researched that the people of this generation are smart, aware of their surroundings and are very fair minded individuals. It has also been found out that for example, the people of this generation likes to be entertained in ads that are directed towards them but they do not like ads that do not make fun of other people.

Values:- a. Self-expression is considered more important than self-control b. Branding and marking their values is important to this generation c. Violence is considered as a form of communication which is quite acceptable to them d. They believe that respect is to earned, it is not given freely 2. Attributes/ Characteristics:- a. They adapt themselves very quickly to new things b. Believe in change and challenges c. Resilient, imaginative and capable d. Very dedicated to their work e. Easily accept diverse background f. Have a global perspective 3. Work Style:- a. Need to have an understanding of all things that affect them

b. Believe that the work they do expresses them c. Multi-workers i. e. they do more than one activity at the same time d. Active involvement in their work rather than passive involvement e. Believe in balance life style and work f. Are very flexible and adaptable to change and extremely ambitious g. Except social corporate responsibility h. Believe in work teams and continuous learning The cultural and ethnic implications that are being faced by the people of generation Y is that they are very expectable to diverse cultures and are willing to work along them in a corporate environment.

The problems that are posed by generation Y is as follows:-

The characteristics of generation X workers in a work place are as follows:-

They are also very adaptable and self controlled b. Very responsible c. They believe in independence in all walks of life (Martin) 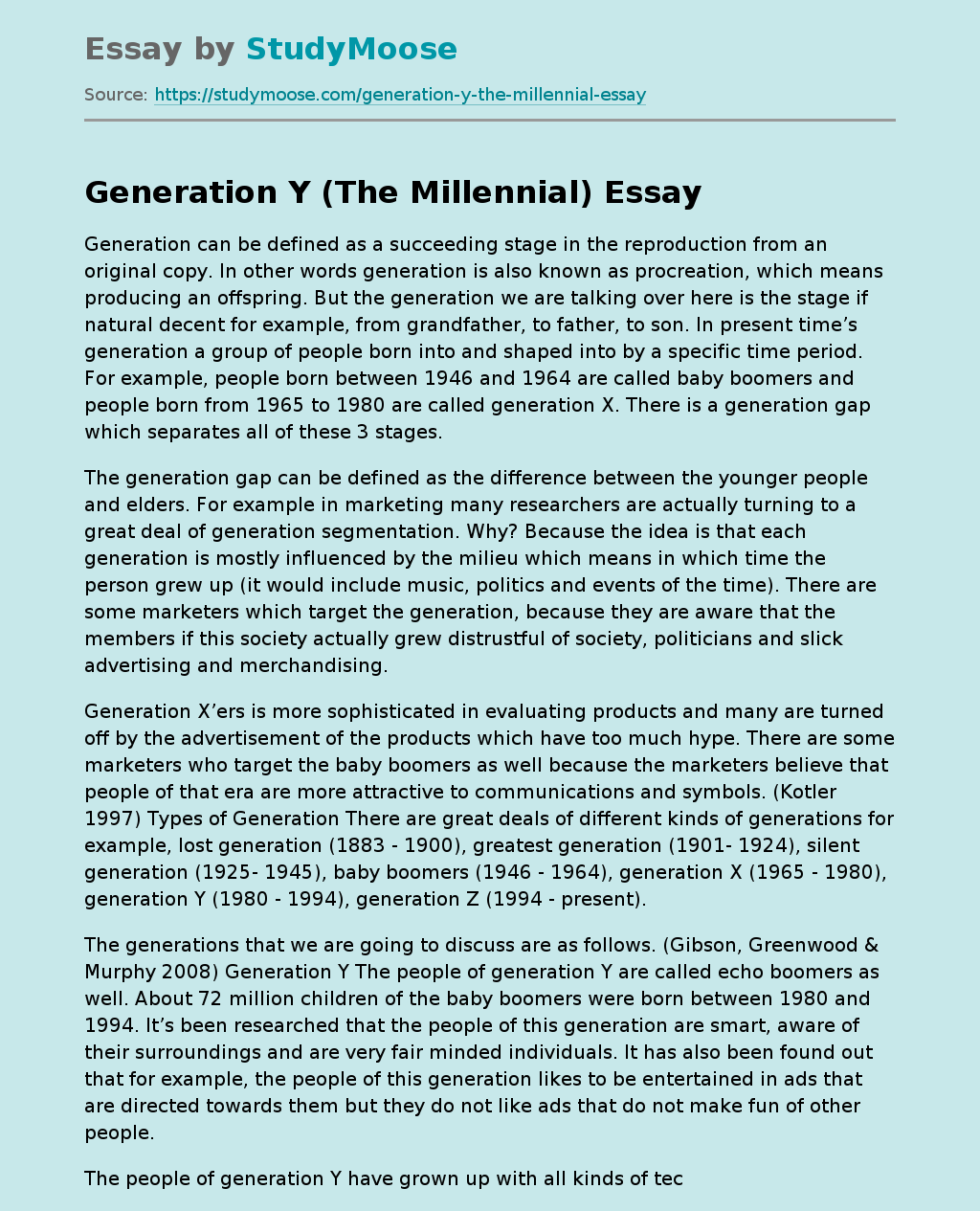