General Motors, along with its competitors, are part of the Automotive Manufacturer (Major) industry of the Consumer Goods economic sector. Companies in this industry make passenger cars and light trucks, as well as chassis for those vehicles. Demand is driven by employment and interest rates while the profitability of the individual company depends on manufacturing efficiency, product quality, and affective marketing. Large companies have economies of scale in purchasing and marketing while smaller companies can compete by focusing on specialized markets.

Don't use plagiarized sources. Get your custom essay on
“ General Motors Company in Automotive Industry ”
Get custom paper
NEW! smart matching with writer

The company markets its vehicles primarily under the Buick, Cadillac, Chevrolet, GMC, Opel, Holden, and Vauxhall brand names, as well as under the Alpheon, Jiefang, Baojun, and Wuling brand names.

It also sells cars and trucks to dealers for consumer retail sales, as well as to fleet customers, including daily rental car companies, commercial fleet customers, leasing companies, and governments. In addition, the company offers connected safety, security and mobility solutions, and information technology services. The company, through its subsidiary, General Motors Financial Company, Inc., provides automotive financing services and lease products through GM dealerships in connection with the sale of used and new automobiles that target customers with sub-prime and prime credit scores.

General Motors Company was founded in 1897 and is based in Detroit, Michigan. The current iteration of GM traces its roots to mid-2009, when the former GM was split into two companies after it emerged from Chapter 11 bankruptcy protection: General Motors and Motors Liquidation (the name for leftover assets). Despite General Motor’s troubles with the dangerously defective vehicles, they don’t seem to be hurting sales. As of April, the automaker’s sales in the U.S. rose 7% from a year ago. The company expects to spend $1.7 billion to cover the cost of the record setting number of recalls so far in 2014. General Motors has landed on both Forbes’ and Fortune’s top rankings on multiple lists, including the following: #67 on Forbes’

Estimated lease revenue is recorded ratably over the estimated term of the lease based on the difference between net sales proceeds and the guaranteed repurchase amount. The difference between the cost of the vehicle and estimated residual value is depreciated on a straight-line basis over the estimated term of the lease. Automotive Financing – Finance income earned on receivables is recognized using the effective interest method for consumer financing receivables and accrual method for commercial financing receivables. Income from operating lease assets, which includes lease origination fees, net of lease origination costs and incentives, is recorded as operating lease revenue on a straight-line basis over the term of the lease agreement.

The contingencies (and commitments) are listed under the Total Liabilities on the balance sheet, followed by the reference to Note 17. The contingencies described under this note includes litigations, product liability, credit card programs, environmental liability, asset retirement obligations and non-cancelable operating leases. Most of the contingencies are based off of litigations and product liability, for there are many various legal actions, governmental investigations, and claims and proceedings pending against the company. The biggest contingencies General Motors lists in Note 17 to the financial statements are the GM Korea Wage Litigation where eight separate group actions were brought up which involve 10,000 employees, which allege that GM Korea failed to include bonuses and certain allowances in its calculation of Ordinary Wages due under the Presidential Decree of the Korean Labor Standards Act.

The GMCL Dealers’ Claim was filed in the Ontario Superior Court of Justice against GMCL on behalf of a purported class of over 200 former GMCL dealers (the Plaintiff Dealers) which had entered into wind-down agreements with GMCL. The UAW claim is a suit against General Motors in the U.S. District Court for the Eastern District of Michigan claiming that GM breached an obligation to contribute $450 million to the UAW Retiree Medical Benefits Trust (New VEBA). The Nova Scotia Claims Litigation is a party-in-interest proceedings pending in the U.S. Bankruptcy Court for the Southern District of New York to adjudicate claims in the Old GM bankruptcy arising from certain securities issued by General Motors Nova Scotia Finance Company (Nova Scotia Finance), an Old GM subsidiary which we did not acquire in 2009 (Nova Scotia Claims Litigation).

General Motors uses the indirect method of preparing the Statement of Cash Flows. The largest increase in the operating activities section of General Motor’s Statement of Cash Flows is the change in deferred taxes, from -$35,561 million in 2012 to $1,561 million in 2013. The largest decrease was depreciation from $38,762 million in 2012 to $8,041 million in 2013. There are many reasons that could explain any unexpected operating activities that caused cash flow to decrease. For example, the large decrease in depreciation could be the selling of lease vehicles or related equipment used to manufacture parts for the vehicles. Sales proceeds from investments care classified as available-for-sale and sold prior to maturity were $4.7 billion, $4.7 billion, and $1.6 billion in the years ended December 31, 2013, 2012, 2011. Some of the sales proceeds came from investments in the China Joint Venture, the sale of New Delphi, and the acquisition of GM India. Acquisitions of available for sale securities had increased from 2012 (-$4,650 million) to 2013 ($-6,754 million), however is still significantly lower than in 2011 ($-20,535 million). Acquisitions of trading securities have been decreasing from 2011 to 2013. Both show a slowing of investments. General Motor’s purchasing leased vehicles (net) have doubled from 2012 ($-1,050 million) to 2013 ($-2,254 million).

General Motors Company in Automotive Industry. (2016, May 08). Retrieved from https://studymoose.com/general-motors-company-in-automotive-industry-essay 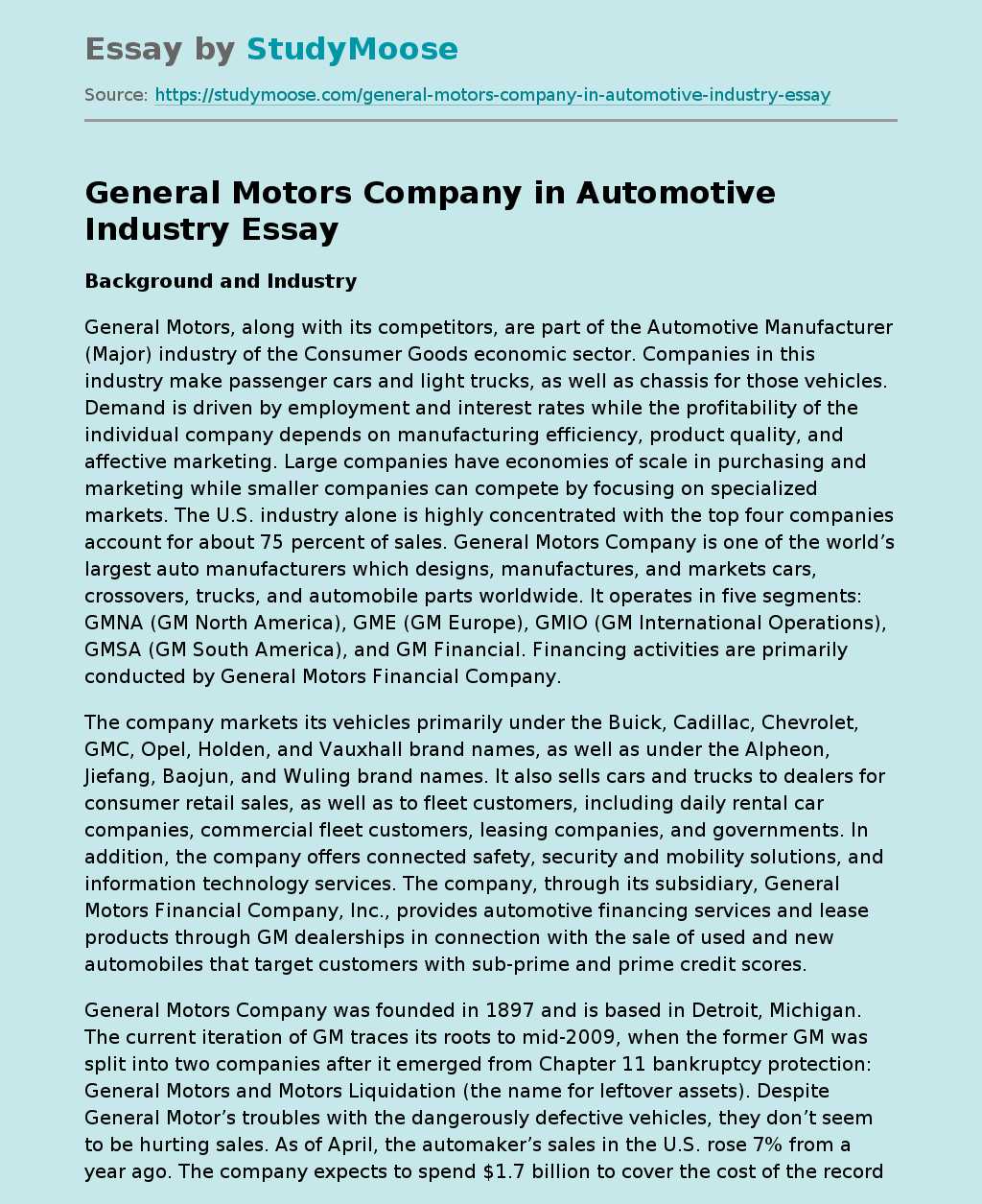