Robert E. Lee was born on January 19, 1807 in Stafford, Virginia. The son of Lighthorse Harry Lee and was educated at the U.S. Military academy. In 1829 he graduated second in his class receiving a commission as second lieutenant in 1836 and captain in 1838.

He distinguished himself in the Mexican War and was wounded in the storming of Chapultepec in 1847; for his meritorious service he received his third promotion in rank. He became superintendent of the U.S. Military Academy and later appointed colonel of calvery.

Don't use plagiarized sources. Get your custom essay on
“ A biography of General Robert E. Lee ”
Get custom paper
NEW! smart matching with writer

He was in command of the Department of Texas in 1860 and early the following year was summoned to Washington, D.C., when war between the states seemed imminent. President Abraham Lincoln offered him the field of command of the Union forces but Lee refused. On April, 20 when Virginia succeeded from the Union, he submitted his resignation of the U.S. Army.

On April 23 he became commander in chief of the military and naval forces of Virginia. For a year he was military adviser to Jefferson Davis, president of the Confederate States of America, and was then placed in command of the Army in northern Virginia.

In February 1865 Lee was made commander in chief of all Confederate armies; two months later the war was virtually ended by his surrender to General Ulysses S. Grant at Appomattox Court House.

The masterly strategy of Lee was overcome only by the superior resources and troop strength of the Union. His campaigns are almost universally studied in military schools as models of strategy and tactics, He had a capacity for anticipating the actions of his opponents and for comprehending their weaknesses.

He made skillful use of interior lines of communication and kept a convex front toward the enemy so that his reinforcements, transfers, and supplies could reach their destination over short, direct routes.

His greatest contribution to military practice however was his use of field fortifications as aids to maneuvering. He recognized that a small body of soldiers protected by entrenchments can hold an enemy force of many times their number, while the main body outflanks the enemy attacks a smaller force elsewhere. In his application of this principle Lee was years ahead of his time; the tactic was not fully understood or generally adopted until the 20th century. He applied for but was never granted the official postwar amnesty. He accepted the presidency of Washington College, now Washington and Lee University. In the fall of 1865 within a few years it had become and outstanding institution.

On October 12, 1870 Lee died at the University and has long been revered as an ideal by southerners and as a hero by all Americans. His antevellum home is now known as Arlington House, the Robert E. Lee Memorial, and is a national memorial. In 1975 Lee’s citizenship was restored posthumously by an act of the U.S. Congress. 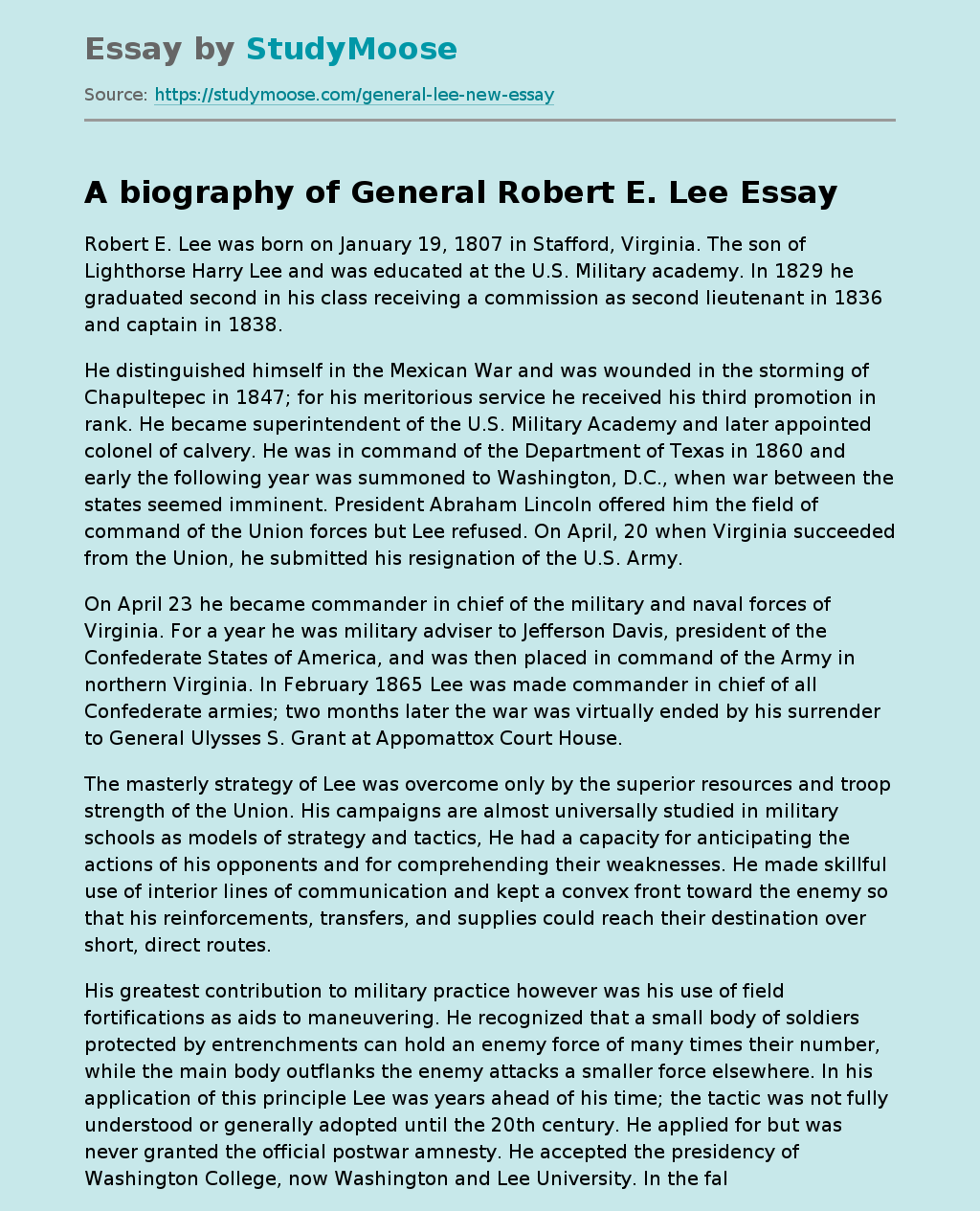