The issue we would like to discuss here is about environmental pollution,to make it simpler and precise,we sometimes refer it to the word pollution in the later parts of our assignment.Pollution is spreading like wildfire in many regions of the world.The two most significant types of pollution would be air and water pollution.Of course,there are still various other types of pollution such as soil contamination,noise pollution,light pollution and many more that we going to discuss further after this.

Pollution has becoming one of the most debated and concerned topics of all times by global citizens because of its disastrous effects on everything on this Earth.Although there are quite an amount of people that care about the level of pollution our earth is facing,there are still too much people ignoring this issue and some even continue doing some activities that produce even more pollution to the surroundings intentionally or unintentionally.

Globally speaking,pollution problem is much complicated and bigger than we knew.

In almost all the cities in the world,people are forced to live with dirty air,contaminated water and all sort of disturbing noises.Developing countries of the third world experience the most severe pollution because not only to they lack any form of sustainable management but they also lack even the basic sanitation so you can imagine how bad is the environmental condition in these countries.

Pollution of the environment is causing great damage to ecosystem that depends upon the health of this environment.

Air and water pollution can cause death of many organisms in the ecosystem, including humans.According to some estimations,14.000 people die each day in the world, most of them are in Africa. This is really no surprise when you look at the data that says that 700 million Africans do not even have access to a proper toilet, whether alone clean water.Pollution is a very serious issue and took everyone to prevent and reduce the level of pollution that our mother Earth has suffered. Without the cooperation of all global citizens,this issue is almost impossible to be solved.

Many developed countries have introduced certain laws to not only regulate various types of pollution but also the laws to mitigate the adverse effects of pollution.We,humans,are the one to be blamed of the escalating pollution level we faced nowadays.Pollution levels need to be controlled all the time if we want to ensure our mother Earth is still a suitable living places for our offspring.Unfortunately, people nowadays really having ignorance of their responsibilities toward our environment.Since the adults already ignore the importance of saving our environment,what do you all expect from your children?We must stand still and give all out in tackling pollution.Preventing introduction of pollutants into the environment is the best way to protect environment from pollution.To do so it is important to develop ecological conscience of nearby communities and effective waste management in the form of recycling.

Healthy environment is prerequisite of healthy life for us and our children, and fighting pollution is definitely the best way to keep our environmental healthy.

The definition of pollution is the process or act that human did during our daily lives which had pollute or contaminated the environment or a state of being polluted with harmful chemical substances that may cause health problems to human beings or even cause some deathly disease such as cancer which is the growth of abnormal cells in the human bodies. (http://www.thefreedictionary.com/pollution)

According to Oxford dictionary, the definition of pollution is the presence in air, soil, or water of a substances with unpleasant or harmful effect.

How much do you know about pollution?The concept of pollution is the way we see and we act toward the situation our environment is contaminated by those non-biodegradable wastes being released during the activities of human beings, making serious negative effects to every single living object in this world.

Can u imagine that there’s already pollution on Earth since there’s lives. Of course, the man kinds had cause pollution even before the stone ages which is when we know how to set up fires by burning woods. The pollution growing seriously when human undergoes evolution in technologies. During stone ages, human acknowledge the skills to make weapon and pottery by cutting and trimming stones but the side product is dust. Until the metal ages, fires are widely and intensively use to melt metal in order to shape it into something useful and large amount of smokes are produced. Then, industrial era, the starting of massive pollution on Earth which is when vehicles are introduce to humans and the level of pollution increased in amount that no one had imagine. So, as we can see, things had got worse from one to one until now, a modern digital era. The pollution during this era is so serious that it involved almost all the aspect of the environment such as air, water, soil, sound and many more. They even cause harmful effect on human health and no one know what will happen if the pollution level continues to rise.

There’re so many types of pollution on Earth. So, let’s have a quick look on them before going any deeper about it.

It’s the most serious pollution of all and it brings a serious effect on human health. It can be categories into few types depending of on their combination of pollution or toxins in the air itself. For example, aforementioned ozone which is known as smog and particle pollution which is known as soot are the two most common and widespread types of air pollution we currently facing. There’re also pollution that consist deadly pollutants such as carbon monoxide, lead, nitrogen dioxide or even toxins like benzene, mercury and acid gases.

Since we can’t survive without water for just a few days, it shows how valuable water is to us. Water pollution is mainly causes by wastage thrown into it, but it’s also can causes by chain reaction from soil pollution and air pollution. Soil normally acts as a filter of underground water sources which is the root of water we drink, as the filter is polluted, no doubt that the water will also be polluted. Water pollution causes tons of effect on human beings since other than drinking from it, it will also contaminate the sources of protein we need to obtain in order to maintain our good health.

Soil Pollution is majorly causes by agricultural chemicals such as pesticide and fertilizers since the increase in amount of human and the food consumption. As the soil is contaminated, the chemical won’t disappear itself but remain within the soil, when rainfall the water will wash it away and bring it into the water sources which again causing a water sources being contaminated by chemicals that may bring side effect towards human and of course other living things on Earth. 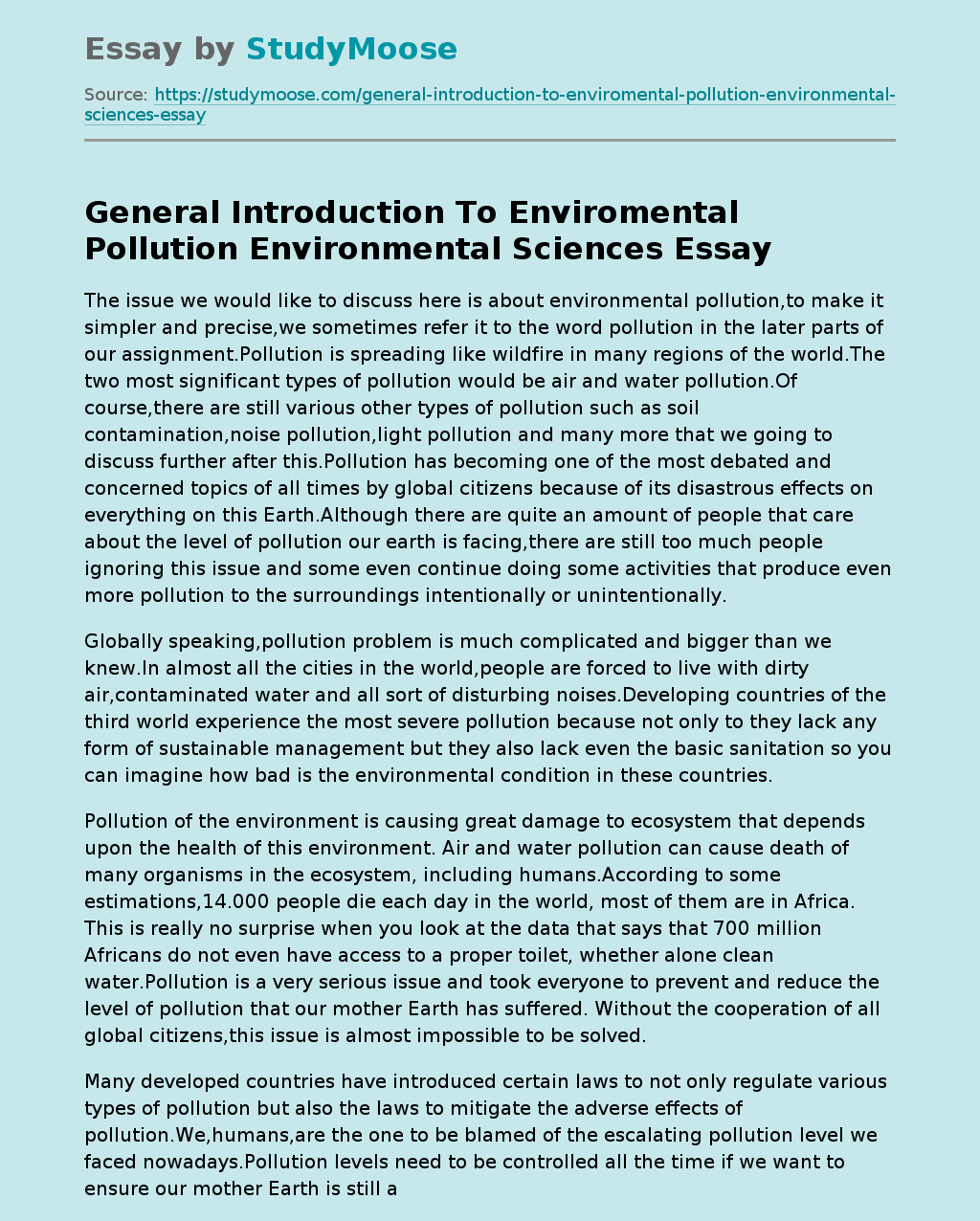