Base on what you have learned in this course, your textbook and any reference books that you may have read, what are the problems that the main character has? What possible solutions would you suggest (with theoretical support) to solve the problems? In referring to your own life, what have you learned from this scenario and how can you apply these into your life?

According to the case study of assignment, it seems to me that Sammy encountered great difficulties in a couple of problems on intrapersonal and interpersonal competencies, which keep weakening her family relationship as well as her way of living.

Don't use plagiarized sources. Get your custom essay on
“ General Character’s Problems ”
Get custom paper
NEW! smart matching with writer

In the following, there will be three sections for the above discussion. First, based on what I have learned in my course, I will attempt to illustrate out the most important problems that suffered by Sammy. The second part, some possible recommendations will be provided so as to help her building up a positive relationship with her parents as well as her siblings, peer fellow or elsewhere.

At last, I would like to conclude with my personal sharing which is completely learned from this scenario.

Obviously, Sammy is getting lost in herself. She mess up with her unexamined life and confused by the question of “Who am I?” from the inside out. She doesn’t realize herself clearly as she even doesn’t know what she likes or dislikes. It determines that Sammy was incapable of knowing herself and seems have unclear goal in future.

This would be the major reason drive her getting an unsatisfactory result in public examination. She has attempted to make choice just fulfilling what her parents want her to do; however, once situation getting worse, she have lost her own decision to determine what should do soon. She has no idea about her totality of thoughts and feelings with reference to herself as an object. (Rosenberg, 1979)

Besides, Sammy often keeps comparing herself with others by physical appearance, talent, popularity, etc. However, she harbored negative feelings about all her surrounding people. These comparisons could only diminish her uniqueness and further result to make her losing of confidence. It revealed that the value she placed on herself is quiet low. It seems to me that the four sources of self-esteem, (1) social interaction, (2) social information, (3) social comparison, and (4) self-observation (Baron, 1990) have been damaged and unplugged in her case.

Last but not lease, there is a clear communication problem within Sammy’s family. She seldom talks peacefully and sincerely with her parents. Having quarreled once, Sammy chose to avoid communicating with them which only weaken much more on their family relationships.

Here are 3 possible solutions for Sammy:

Firstly, Sammy ought to recognize more about herself. Human development researchers pay attention to four developmental areas of self, which are physical self, mental self, emotional self and social self (Hanna, Suggett, & Radtke, 2007). And in which the mental self indicates the learning abilities, thought-processing patterns, as well as attitude and motivation are facets of this important area of the self. So, Sammy needs to be strengthened on her mental self mostly, which can help her to establish her thought-processing patterns, beliefs etc. Reading books is a favorite way to improve mentally (Hanna, Suggett, & Radtke, 2007).

By developing her sense of mental self, Sammy could acquire critical and creative thinking which could encourage her to think matter deeply, dig out multi-level ideas, challenge assumptions, and examine the logic of differing points; hence, she can explore herself more specific and capable of differentiating between her ideal self, actual self, and ought self (Edward Tory Higgins, 1987). Having developed a creative thinking, Sammy could think about ideas in different ways and generate variety of possible solutions to any problems. These two kind of thinking ability will create more curiosity which turn to activate Sammy think much and examine others’ opinion rather just followed to do so.

Discovering Self-Concept And Self Valuing

Corresponding to the 2.2 problem of Sammy, i.e. low self-esteem, she ought to discover her self-concept indeed. The self-concept is the totality of her thoughts and feelings with reference to herself and is the foundation on which almost all her actions are based (Rosenberg, 1979), consisting (1) self-descriptions, (2) ideal self, and (3) self-esteem or self-worth. We can observed Sammy was keeping compared herself with others, which reflects her unsatisfactory on her actual self; nevertheless, maybe her ideal self is quite close to perfect, that makes her never accept her actual self and lower her self-esteem, and one of the areas which mostly affects is academic achievement. Studies have found a significant positive correlation between self-esteem and Grade Point Average (Baker, Beer, & Beer, 1991, cited in Hanna, Suggett, Radtke, 2007). So, thoughts changing should be adopted. Sammy should think more positive instead of keeping meaningless comparsion and pursuing the ideal self. She should be encouraged to reveal her interest, or participate more social gathering rather than staying at home for aimless surfing.

Disclosing Self On Criticism

Actually, Sammy’s parent has their own responsibilities, in which even delivering small quantities of criticism would be appreciated in a non-hurtful ways. However, my focus is on Sammy only; and so, I would suggest Sammy finding a positive way of communication. She needs to learn how to face criticism. Positive responses to criticism are important as it moves relationships in a positive direction. “The effective way to respond to criticism is to use an assertive style. It does not attack, surrender to, or sabotage the critic. It disarms the critic.” (McKay and Fanning, 2000) It is no use to response criticism emotionally.

Sammy is encouraged to learn keeping a peaceful mind to receive any criticism. Rather than Shut herself up or lock the door, Sammy may try to express her different opinion to her parent but in calm. This self-disclosure helps knowing each others. Social penetration theory (Altman and Taylor, 1973) explains that close relationships develop in terms of increasing self-disclosure. Constructive criticism points out possibilities for improvement (Ginott, 1965).

In this case, I am found out the importance of self-knowing and self-valuing, and realize that an effective communication is really essential to build positive relationship. Not only communicate well on normal situation, but also we have to communicate healthy on criticism. In my case, my father is a kind of criticism-favor man, who loves to blame on everything since his 65 years old. Every time he shouted to us, just like Sammy, I quarreled with him first and shut up soon, or left his house, just let him alone . I though this is a smartest way to avoid meaningless argument with the old man. But the fact is he never stop quarrelling with me once I came back.

Having studied this case, I started to ask my actual self: “Do I love my father?” The answer is “absolutely!” So, which drive me to think how to build a better relationship between us. Having known more about positive communication on criticism, one times, I didn’t run away, but listened to him peacefully. My old man shouted about half an hour, and finally stopped. Maybe he felt tired, and as I really listen carefully what he said, I tried to “communicate” my opinion with him peacefully and pointed out some my opinion about his arguments. Anyway, from that day on, we have less arguing, instead we talk more about the British Premier League. 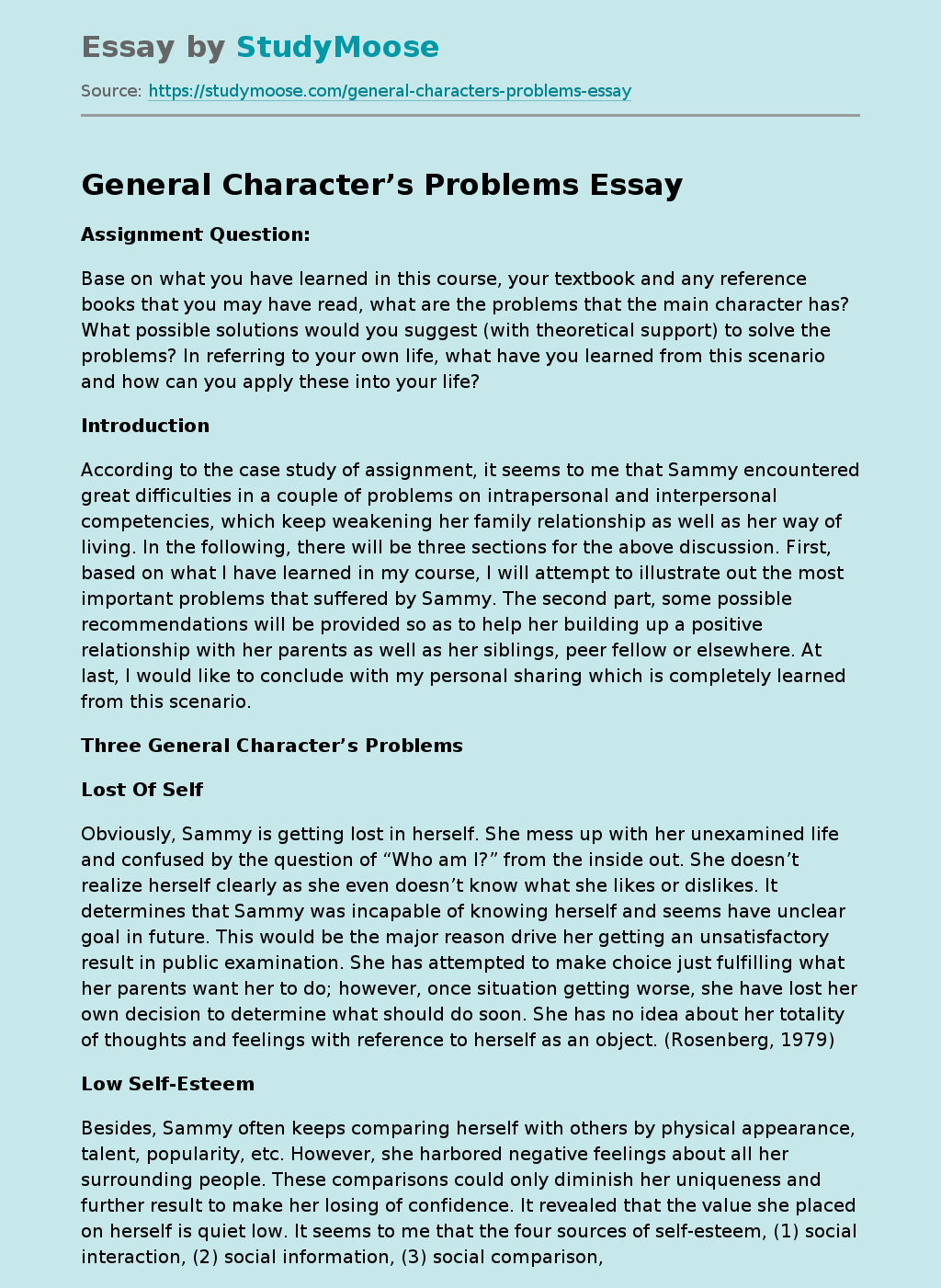