Everyone is entitled to the equal wages for equal work. However, women’s average income has been lower than men’s in nearly all occupation and women in Canada are still far behind the men’s starting line on wage in the labour market. It is one of many parts of gender inequality in Canada, when considering labour market participation in view of gender. I think that the current measures to settle wage discrimination are not effective enough to correspond to market income inequality.

Don't use plagiarized sources.
Get Your Custom Essay on Gender wage gaps Just from $13,9/Page

That’s why I choose this topic. It is required to think of new alternatives for closing the gap. So I provide a few ways to figure out gender wage gaps.

What is the gender wage gap?

The gender wage gaps describe the earning differences between men and women on paid employment in the labour market. It can be measured in many ways, but the most common method is to focus on full time and full year wages.

As a result of women have been investing significant time and resources in their education, women now consist of the majority of undergraduate and master’s degree in Ontario. 62% of university undergraduate students in Canada are women. But women still earn less than men in all occupational categories and all educational levels. Although more women than men go to university or college, they don’t always get paid better than men who have the same work. It is particularly embarrassing that the pay gap is grater for younger generations of women. There is a 39% gap between men and women’s earnings in the ages from 35 to 44. Women account for 60% of all minimum wage workers and the women at low wages are presenting all age groups. This is the reason that poverty follows women after their retirement with women age 65. It’s over twice as likely as men to be low income.

The gender wage gap gets wider when women have children and when they have a part-time job. Women having children earn 12% less than women without children. Women’s opportunities for higher wage are limited by the responsibilities of family which they still burden disproportionately. While now the most majority of mothers work in the paid labour force (almost 70% of women having children under five are working), the employment rate of women with children have much lower than men with children. Making less money for their family than men affects significantly them throughout their lives, which could put women and their children at a higher risk of poverty and decrease their income to earn a lifetime and retirement income.

1. The majority of women are segregated from men into different work and different workplaces. In Canada, 67% of women work in traditional occupations such as teaching, nursing, clerical, admin or sales and service jobs in 2009. 2. In general, women’s segregated work is paid less than men’s work. The higher the concentration of women, the lower the pay. Women’s skills and competencies are undervalued because of their association with women, as are sectors and industries such as health care and services in which women predominate.
3. Women’s lower pay reflects the systemic undervaluation of women’s work relative to that of men.”

Functionalists have the view that inequality is a product of the traditional division in human societies. In the past, men had a tendency to attend to more external tasks such as working for company or doing government job and women attended to more internal tasks such as those involved in raising child or doing house work. While both kinds of labour are functional and necessary for a society’s survival, the external tasks which were accomplished by men always have been more highly rewarded than the internal tasks made by women. So in functionalism, it was very natural for men to get higher wage than women.

However, gender roles and their accompanying inequalities have changed in industrialized societies. Industrialized society made the traditional division of labor less functional. Even though traditional arrangement remains in force in most societies, the traditional labour of division is no longer meaningful today. That means men and women are the same as the part that comprise the social and men are women must be treated equally if they do the same work. So, I think that it is not appropriate to explain the gender wage gap in functionalistic perspectives any more.

Solutions of the gender wage gap

There are three solutions which I want to suggest for solutions of the gender wage gap.
1. To support working families

Although female workers have lower wage than men, their role is very important part of this society. As we know from this sentence “Women having children earn 12% less than women not having children”, it is important to make circumstances to focus on work in workplace. Governments and companies need to create more family-friendly workplaces and workplace policies especially for women with children. Work places need to consider providing parental leave and paid leave for sickness and family care. It is also necessary to offer high-quality childcare arrangements and encourage the development of more part-time jobs to pay well and to have good benefits. Not only is such policies good for female workers, but it beneficial to the company that want to hire competent female workers.

2. To increase the minimum wages

3. To need detailed analysis the data

Although there are sufficient resources to show that female worker tend to work equal and earn less than men, more detailed analyses are needed to settle underlying causes. Governments need to collect and share particular and reliable country’s data from which the respective gender wage gaps of country can be calculated and compared. This would make it possible to find out effective ways of dealing with the problem and to identify possible improvements to existing legal frameworks likely to lead to decreasing significantly in the wage gap.

The Pay Equity Office started the Wage Gap Program in 2011, designed to examine current compensation data and assess the possibility of gender wage gaps for non-unionized employees in Ontario’s private sector workplaces. Wage gaps can be caused by a lot of factors, one of which relates to wage equity. The Wage Gap Program enables the Office to more precisely direct its efforts for supporting workplaces that appear to have wage equity gaps. At first, the Office conducted the Program by obtaining correction data from employers with over 500 employees. Workplaces with 250 to 499 employees are being examined now and it is expected that by the fall, workplaces with 100 to 249 employees will be contacted. 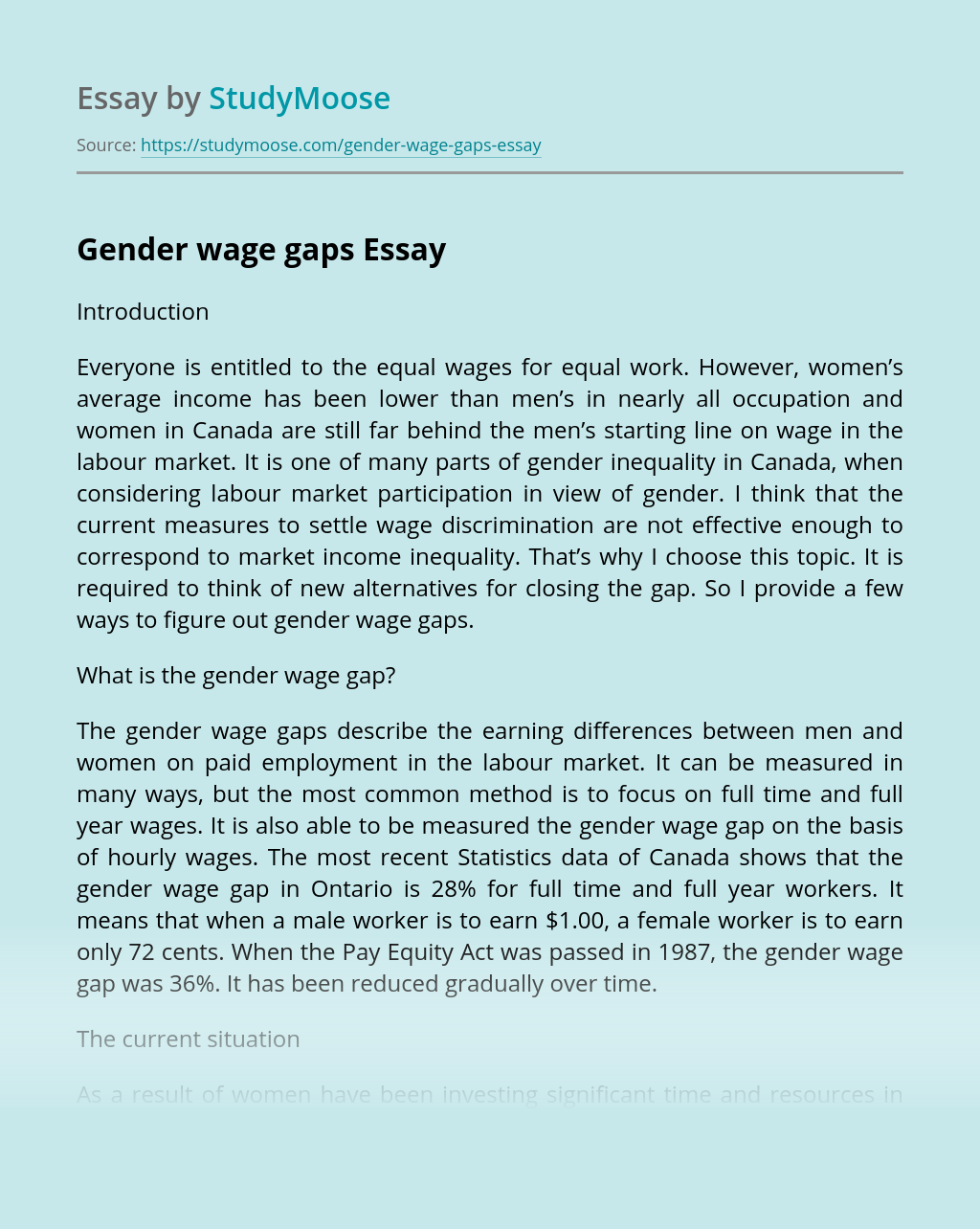