“Women like us. We endure. It’s all we have.” Mariam, the child of a wealthy man and his house maid, lived by this quote all her life. The quote also applies to Laila, a woman who was raised in a modern household with education. An analysis of the hardships of women in Khaled Hosseinim’s, A Thousand Splendid Suns, would reveal that the injustices of society are coped with differently throughout several generations of women. Although Laila’s upbringing allowed her to be the stronger of the two women, both Mariam and Laila triumphed after enduring so much evil and cruelty.

Don't use plagiarized sources. Get your custom essay on
“ Gender Struggle in a Thousand Splendid Suns ”
Get custom paper
NEW! smart matching with writer

Their mothers on the other hand did not.

Mariam’s mother, Nana, was at one point the house maid of a wealthy man named Jalil. She later on mothered his child, Mariam. Both Mariam and her mother had become outcastes and were sent to an isolated area as a consequence for the intolerable act. Mariam’s mother resents Jalil for it, and she also often complains about it to her daughter, ultimately trying to discourage Mariam from not trusting him.

Ironically, Mariam’s mother did not openly express her resentment towards Jalil while he was around, nor did she ever attempt to change the situation. In using the inner strength that a woman contains Nana could have strived to make a better life for both she, and her child. Laila’s mother, Fariba, had a seemingly happy household, yet she often found herself immersed in overwhelming grief.

When her sons Ahmad and Noor leave to fight in the jihad, and are later on killed in action Laila’s mother stays in bed mourning their loss.

When the opportunity presents itself for the family to leave she wishes to stay in Afghanistan in order to see the freedom of the land that her sons died for. Fariba may have a more optimistic view in this sense. A look at the greater picture would reveal that she too lacks the effort to change the situation she is in, in similarity to Mariam’s mother. Fariba stayed in bed living in the past, letting everything take its course in hopes of justice, instead of solidifying her future by making a difference.

Mariam and Laila are years apart by age, and come from two entirely different life styles, what brings these women together is one man, Rasheed. They are forced to marry this man through loss and heartache. Their marriages to Rasheed consist of emotional and physical abuse that is legally acceptable under fundamentalist Islamic governments such as the Mujahedeen and the Taliban. In addition to domestic violence, Laila and Mariam have to deal with senseless war, in which many of their closest loved ones lost their lives. Mariam and Laila endure because with their mentality it is simply the only choice they have. Neither of them would have been willing to just give up so they persevered and tried to make the best of the situations they faced. They both tried to have an optimistic view in a life that seemed to have little joy.

Laila’s mother was never able to let go of the past and allow herself to move on from her son’s deaths. She was unable or unwilling to see her daughter and her husband as a way to make a happier future. Mariam’s mother became a bitter woman – perhaps many would say she had no choice, but we all have a choice in how we react and behave. She had decided to take her own life when Mariam because she felt she had nothing left to live for.

These choices were something that Mariam and Laila would have never made, not because they were better than their mothers, but simply because they chose to never give up and never lose hope. In conclusion, Laila and Mariam overcame several accounts of injustice, evil, and extreme cruelty, unlike their mothers whom fell short upon effort. Despite their seemingly opposite upbringings both women far surpassed the efforts of their mothers. To endure is to continue or to last despite hardships, pain, and loss. Laila and Mariam clearly have endured through a series of injustices. It was their only choice. 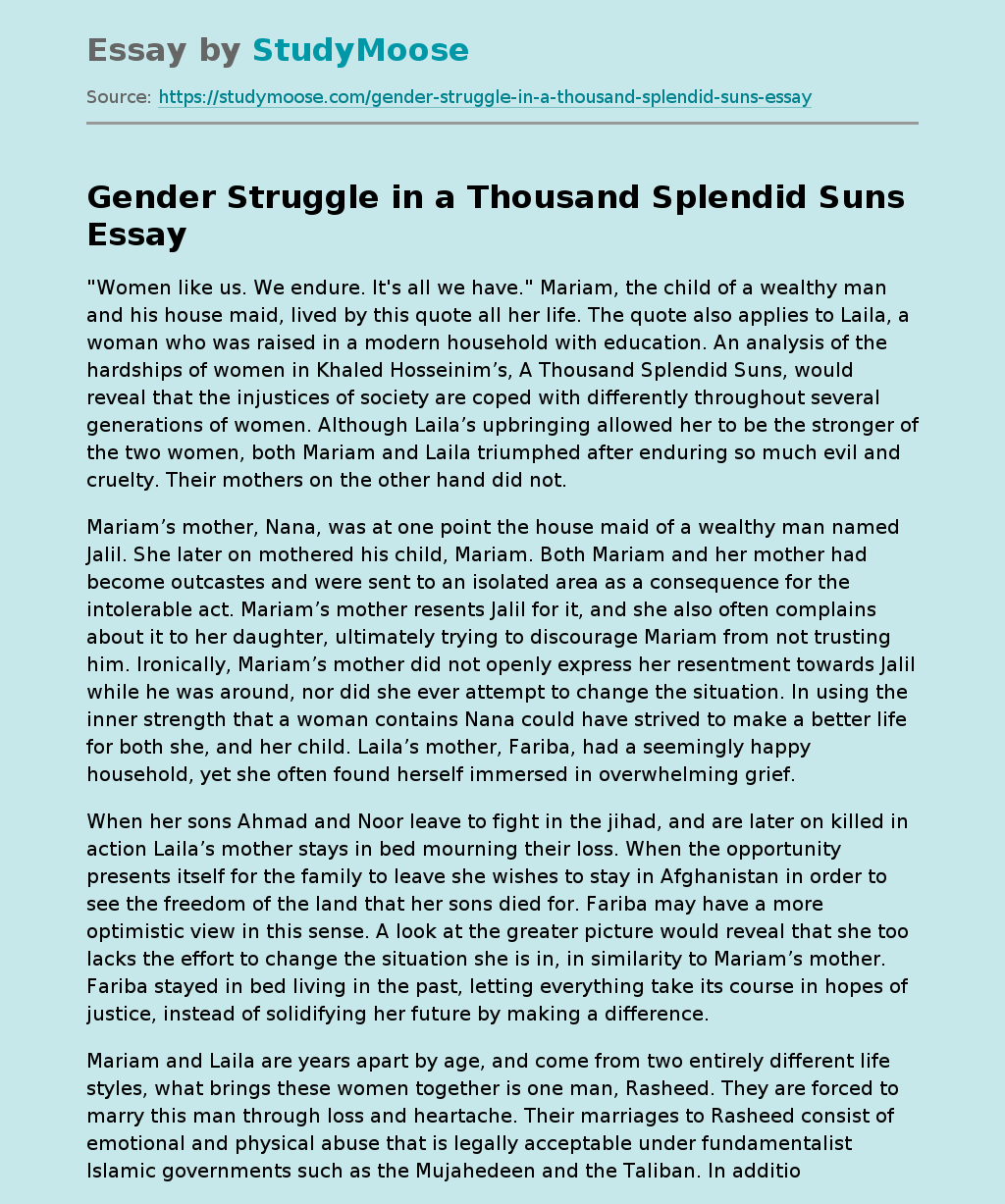